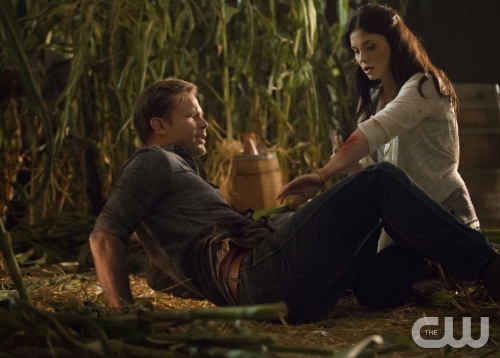 Season 6 of The Vampire Diaries is moving at breakneck speed, and the next episode [Episode 5] is titled ‘The World Has Turned And Left Me Here.” Lucky for you, we’ve managed to get our hands on a sneak peak from the show, as well as some spoilers for the next episode.

The official CW The Vampire Diaries spoilers synopsis provided is way too long, but here are the most interesting points: “IT’S HOMECOMING – With Homecoming around the corner, Elena (Nina Dobrev) invites Liam (guest star Marco James) to attend a party at the corn maze with her. Instead of attending the homecoming festivities, Caroline (Candice Accola) is preoccupied after Stefan (Paul Wesley) shows up unexpectedly and needs her help cleaning up a mess created by Enzo (Michael Malarkey).”

Alaric also attends the party, but apparently, a ‘devastating accident’ happens and leaves him in life-saving mode. Meanwhile, Tyler battles his werewolf curse and Stefan tells Caroline that he intends to leave Mystic Falls – likely due to his brother’s disappearance.

But most importantly, Bonnie and Damon have made “an important discovery that affects their quest to get back home.” For TVD fans, you know what this means, don’t you? Our Delena is just a few episodes away from being reunited! Since it seems that Stefan and Caroline still have their pseudo-romance thing going, we’re going to need our Elena to get some sweet loving sooner or later. And honestly, Elena and Damon have always been a more interesting couple to root for, mostly because Stefan has become so bland lately. He’s mopey and depressed, understandably so, but it still gets grating after the millionth emo self-introspect.