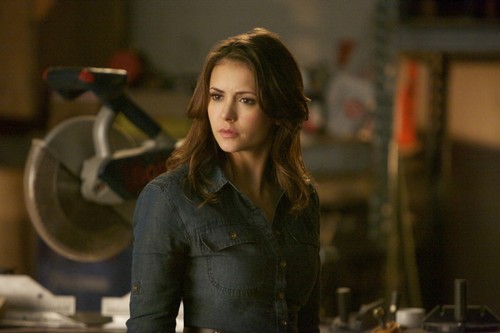 Tonight’s on CW The Vampire Diaries continues with a new episode and it was all sorts of intense,  and we cannot wait till the next episode. Good news,  we managed to get some juicy spoilers and a sneak peek video of “What Lies Beneath”  for your enjoyment below while you wait for it to air May 1st, 2014!

On tonight’s episode we had a flashback to the 1960s.  Stefan tried to distract Elena from obsessing about the state of her relationship with Damon, while Bonnie did her best to be realistic about how the changes happening on the Other Side would affect her existence as the Anchor. Damon demanded the Traveler knife, forcing Jeremy and Matt to admit it had gone missing. Through flashbacks to election night, 1960, Enzo revealed to Elena, Stefan and Bonnie that he has learned what happened to his long-lost love, Maggie, and then, with the unwilling help of Liv and Luke, things took an ugly turn. Trying to calm Enzo down, Damon intervened, but his words caused Enzo to make a desperate and dangerous decision that led to a violent confrontation with Stefan. Finally, Markos enlisted Sloan’s help in a ritual designed to break an ancient curse against the Travelers. Tyler was forced to play a dangerous part in the ritual, while witnessing the incredible power the Travelers now possessed. More happened!  Did you watch tonight’s episode?  We did and a lot more happened, check out our nifty we recap, here!

Spoiler alert: If you’re one of those people who doesn’t like spoilers, stop reading now! We have some juicy spoilers for you about the season 5 episode 20 of CW’s “The Vampires Diary.”

Official CW synopsis: “A CABIN IN THE WOODS – When Tyler (Michael Trevino) turns up at the Salvatore house with the news that Markos’ (guest star Raffi Barsoumian) plan to break the witches’ curse puts Stefan (Paul Wesley) and Elena (Nina Dobrev) in imminent danger, Damon (Ian Somerhalder) suggests they hide out in the remote cabin once owned by Caroline’s (Candice Accola) father. Once there, it becomes obvious to Caroline that Stefan and Elena are keeping a secret, so Damon (Ian Somerhalder) comes up with a parlor game designed to expose the truth. A ghostly presence at the cabin uses violence and fire to make itself known. Meanwhile, Matt (Zach Roerig) takes charge of Tyler’s plan to get information from one of the Travelers, and Bonnie (Kat Graham) continues to keep the truth about the Other Side from Jeremy (Steven R. McQueen), despite warnings from Grams (guest star Jasmine Guy). Joshua Butler directed the episode written by Elisabeth R. Finch & Holly Brix (#520).”

On the next episode Damon takes Stefan and Elena to a cabin to keep them safe, and then he devises a parlor game to get them to reveal a secret they’ve been hiding. Meanwhile, Bonnie keeps Jeremy in the dark regarding the truth about the Other Side.

The Vampire Diaries Season 5, Episode 20 “What Lies Beneath” airs on the CW on May 1st, 2014. Check out the preview video  from episode 20 and let us know in the comments below what you think!