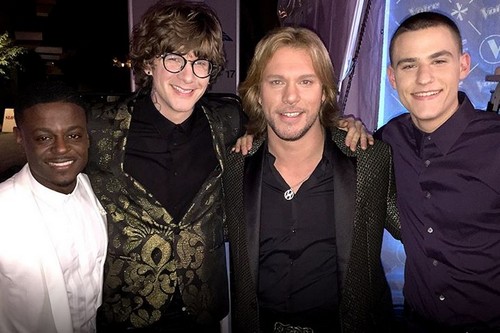 Tonight on NBC the Emmy award winning music competition The Voice continues with an all new Tuesday December 16, season 7 finale called, “Live Finale,” and we have your weekly recap below. On tonight’s episode after weeks of grueling competition the winning artist either Chris Jamison, Matt McAndrew, Craig Wayne Boyd or Damien is revealed in the Season 7 finale.

After last night’s final performance show who do you think will win the title of, The Voice?  We conducted a poll and our readers are tied with who they believe will win.  42.5% think Craig Wade Boyd will take the title, while 37% think Matt McAndrew will win.  Have you voted yet?  There is still time, head here and chime in on your vote!

On the last episode, in the final phase of the competition, the remaining three artists and the “Wildcard” artist performed live in front of coaches Adam Levine, Blake Shelton, Gwen Stefani and Pharrell Williams. Did you watch the last episode? If you missed it, we have a full and detailed recap right here for you.

On tonight’s episode as per the NBC synopsis, “It’s the season finale of “The Voice” where host Carson Daly will reveal who America has chosen to be the winner. Adam Levine, Blake Shelton, Gwen Stefani and Pharrell Williams star as the celebrity panel of coaches. Carson Daly (“Today Show”) hosts.”  We will also be treated to performances by southern rock band Lynyrd Skynyrd, Jennifer Hudson, Bruno Mars, Mark Ronson, Ed Sheeran and Hozier.

Tonight’s season 7 Finale is going to be exciting. We’ll be blogging it right here for you. In the meantime hit up the comments section and tell us your thoughts on season 7 of The Voice and the two new judges, Pharrell Williams and Gwen Stefani.

Carson Daly introduces the coaches and then the finalists Craig Wayne Boyd, Chris Jamison, Damien and Matt McAndrew. Carson says every song last night charted on iTunes. The top 20 are singing Bastille’s Pompeii. They all harmonize together and they are spread all around the room. The crowd is loving this and everyone is on their feet.

Carson asks Adam how it feels to have three in the finale. Adam says he got along with all of them really well and they really listened to his coaching tips. His whole team is intact. Gwen says being on The Voice went so fast and was incredible. Pharrell says all the finalists need to know their next steps and use the show as a platform before they take on the world. Blake says Craig has done everything he could do to win it and says he’s nervous as crap.

Craig decided to share his number with his best friends. He’s doing Keep Your Hands to Yourself by Georgia Satellite. For his bringback, he chose Danica, Sugar and Taylor to sing with him. He says they have amazing voices and says it will be a blast to sing with them again. This is such a fun song. It’s a nice arrangement. They finish to the crowd and judges on their feet.

Carson is in the Spring lounge to talk about the #VoiceFinale and the best Shavine moment is Shavine on the road. The craziest artist reaction winner is Elyjah’s freakout over Alicia Keyes. Next up is Take Me to Church by Hozier – up for a Grammy nomination.

Chris Jamison is doing his bringback next. He chose Luke, Ricky, Taylor Phelan and Ryan to sing Dedication to My Ex. He talks about how cool those guys were and how strong their singing voices are. The song starts out with all the guys on the stage. The whole arena is already on their feet for the upbeat number. The guys are using a lot of sass in this performance. The audience loves it.

Next up is Patrick Stump from Fallout Boy. They are singing tonight with Matt doing their hit Centuries. It’s a rocking number and the audience is digging it. I have to say they are no less for the loss of Pete Wentz. Patrick is incredible fronting the group and Matt is a nice addition. Matt is really wailing and it’s incredible. Wow! Amazing!

Carson talks about Pharrell next and his hat. Blake says he’s like Yoda. They play a hodge podge of some of his crazier quotes. Adam says he’s like a floating sphere of positivity. Gwen says he penetrates people with his wisdom and has Jedi powers. We see a hologram Pharrell. Adam says he’d be like Han Solo and Blake would be Chewbacca. That was great. Pharrell hangs his head to laugh over this.

Carson brings out Bryana, DaNica, Sugar and two others do Bang Bang. It’s very energetic and they sang their faces off with perfect harmony.

Carson says next is Uptown Funk with Mark Ronson and Bruno Mars. It is a totally funky number. I dig it. Everyone is into it and on their feet dancing around. Everyone is cheering as the number ends. Carson says the finalists took some time out during this last week to hold a concert for their fans. We see the four finalists singing Christmas Carols for their fans.

Matt says it was to give back to the fans and thought it was totally awesome. Matt did O Christmas Tree. Craig did Silent Night. Chris did Joy to the World. Damien did Little Town of Bethlehem. All four did We Wish You a Merry Christmas. Then Carson announces they’re all getting brand new Nissans. The guys are thrilled. There are four different models and they each get one.

Damien hopes in a Murano. Chris nabs the Altima. Craig goes for the family car and Matt takes the electric car. The guys are overwhelmed by the gift. Carson says today is red thumb day to remind us all to put down our cell phones while driving.

Next is Craig singing Sweet Home Alabama with Lynyrd Skynyrd. Wow! Love this song and this sounds so perfect. Craig’s voice is perfect with the band’s vibe. The crowd is dancing, clapping and singing along with this classic.

Meghan Trainor is singing her new song Lips are Movin’ and it’s incredible. I would have like to hear All About That Bass, but this one is good too. Carson talks about Adam and how spending time with him is like being in Adam Levine, the musical. We see Blake telling him he’s high and to sit down. Pharrell says Adam is very musical theater.

Gwen says Adam sings show tunes all the time and Blake says Adam is doing high kicks inside. We see him goofing around with Taylor Swift. He says skipping is good exercise and Taylor asks him to show her. Blake says if he was a one man musical it would be Look at me, It’s All About Me. We see he and Taylor doing all kinds of crazy show tunes stuff.

Next is Damien singing with Jennifer Hudson. They’re doing It’s Your World. Funny that she came off American Idol and is there. She’s a testament to what these shows can do if you properly leverage it. She’s won an Oscar, Golden Globe, SAG Award and Grammies. She’s amazing and his voice really compliments hers. They sound very good together.

Next up is Ed Sheeran singing Thinking Out Loud. It’s so beautiful. Love that little Brit ginger’s voice. Everyone is swaying and really getting into it and feeling the vibe. Next is Matt’s bringback number. He chose Sugar, both Taylors and Mia to do Fleetwood Mac’s Go Your Own Way. He says Mia is a crazy good vocalist.

Next is Damien’s bringback number. He has Tanita, Elyjah and Danica to do a R&B number with him. Hey sing Ain’t No Mountain High Enough and rock the house. It’s perfect for their voices.

Carson introduces Jessie J singing with Chris Jamison – it’s her new single Masterpiece. The coaches and crowd are all on their feet applauding this great and hip new number. Next they talk about Blake and call him MC Blakey Blake. They have a montage of can’t touch this. It’s hilarious. They’ve got all the judges in it and it’s incredible editing. Then we see him dancing awkwardly.

The coaches then sing Have Yourself a Merry Little Christmas. They have a full orchestra and Adam even put on a lovely suit. Gwen is in a beautiful red gown, Pharrell a tux and Blake a nice suit. They have fake snow floating around and it’s absolutely gorgeous. We’re back and it’s time for the big reveal of this year’s winner.

Next is third place and it’s Chris Jamison.

Craig Wayne Boyd wins it, he is crowned the winner of Season 7 of the Voice!