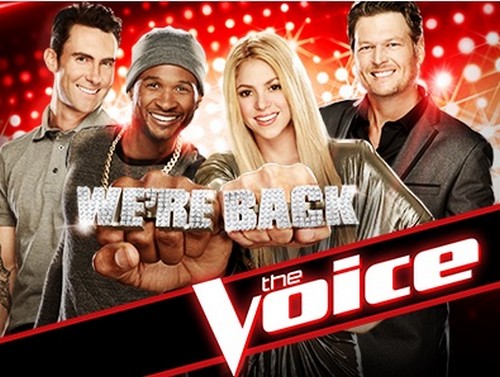 Tonight on NBC their Emmy Award winning music competition, THE VOICE returns with a new season and a new panel of judges.  Shakira and Usher return to join coaches Adam Levine and Blake Shelton.  Carson Daly returns for the sixth season as the host.  The strongest vocalists from across the country will compete in the blockbuster vocal competition.

The show’s innovative format features four stages of competition: the first begins with the blind auditions, then the battle rounds, the knockouts and finally, the live performance shows.

On tonight’s premiere episode we begin with the “blind auditions” which are held in front of the celebrity panel of coaches, including Adam Levine, Blake Shelton, Shakira and Usher, who each pick vocalists for their individual teams. The strongest vocalists from across the country compete to be selected by one of the coaches and fight for a chance to win the title of being named “The Voice.” Carson Daly (“Last Call with Carson Daly”) hosts.

Tonight’s “Season 6 premiere” is going to be an exciting one, which you won’t want to miss. So be sure to tune in for our live coverage of NBC’s The Voice – tonight at 8PM EST! While you wait for our recap, hit the comments and let us know how excited you are about the return of The Voice.

First up is 19 year old pop singer named Christina Grimmie who is hugely popular on YouTube with 2 million subscribers, her family is very proud of her and believe she can be successful; Christina loves the concept of the voice and that’s why she has finally decided to audition for the show.

All the coaches hit there buttons to turn around for Christina, Adam says that he loved seeing how comfortable she looked on stage and believes she could be a huge star. Shakira says that she is back and is ready to focus on her, Usher says that he is prepared to to unlock her full potential and believes she is amazing and thinks he could win it all with her. Blake says that it isn’t about him or them and wants to help her figure out who she wants to be as an artist.; Christina says that she is going to choose Adam as her coach.

Next up is TJ Wilkins who grew up in a bad are with lots of gangs and drug dealing; his father was never around and his mother really helped him keep a good life style. He was once held up but lucky for him he was actually broke and they couldn’t take his money; after high school he went into college for a major in music. T.J. is singing Benny and the Jets by Elton John, he is here to prove that he can be a winner.

Adam, Blake and Usher hit their buttons right away.

Adam says he likes his jacket and loves how he took an R&B approach to Elton John; Usher says that he took it to a place that nobody could have thought of and loved his falceto. Blake says that his falceto is amazing and that he can just use it with no strain is amazing; Shakira says she didn’t turn because he wasn’t great. She thought he was amazing but feels like she should wait off on turning, hoping to find more talent later.

T.J. chooses Usher as his coach.

Next up is 29 year old Kristen Merlin who found her love for music when she was a good and won a contest to sing with Sugar Land and found out that it was what she loved and quit her job to pursue music; she came out to her mom as being a lesbian at 16. She is aiming and hoping to work with Blake because she love s country.

Adam turns right away and so does Shakira.

Adam says that it was so awesome to hear her instincts in her voice and that her voice is so pro; he loves her mind set and wants her on his team so bad. Shakira says that social media is going to be critical for votes and mentions having over 20 million followers. Blake never hit his button because he thought Shakira would be the perfect coach for her; Kristen decides to pick Shakira.

Next up is 16 year old Tanner Linford from Utah, his mom convinced him to do a talent show and he did it; his peers loved it and it really motivated him to pursue singing. His father is proud of his son for stepping out and doing what he loves; Tanner’s greatest role model was his uncle who past away last year and it made him realize that he has to go for this; he is so excited to just see the coaches.

Next up is Biff Gore and he is 45 years old, he is a father to five kids and has number six on the way; this is a once in a life time opportunity and he believes he has to take this shot. Biff explains how his brother saved his life in the army; his brother took him away from the front lines and went instead. Biff is glad to have his brother there, his family give him a videos message encouraging him to do his best; Biff says it is good to be loved. Biff is singing “A Change Is Gonna Come” and Adam hits his button right away; Blake following shortly after.

Shakira then hits her button.

Usher then decides to hit his button near the end.

Shakira asks if she can be his date to the Grammys when he wins; Biff explains he is expecting to have his sixth child. Usher says that Sam Cook is a classic and really loved how he hit the notes with his originality; Adam loved his super high kick at the end. Adam says that he loved it and wanted to be a part of it, Blake says that has been taken to church and believes he needs Biff to help him. Biff decides to choose Usher as his coach.

Next up is the first duo called Dawn and Hawkes, they performed together on a tour and believe they have gotten closer performing together; they play anywhere possible. It’s only the two of them and would love to be able to work with one of the coaches; they are singing “I’ve Just Seen A Face”.

Adam and Shakira hit their buttons right away.

Adam says that it was one of his favorite songs and that was his favorite performance on The Voice; it will crush him if they don’t choose him and it is special to him. Shakira says they have an amazing chemistry that just have everyone fall in love with them too; she was captivated with them. Dawn and Hawkes pick Adam to be their coach.

Next up is Leo Gallo from L.A. and he is 27; he has been performing all his life and has been doing tap dance all his life. He was approached at 13 to be in a boy band put together by Quincy Jones; they never broke out so he started focusing more on dance. Right now he want to do singing; he has always been in groups and finally wants to go out as himself alone. Leo is singing Blurred Lines.

Nobody turns for Leo and Adam loves his outfit; he says there was a lot of energy but they were all focusing on his voice and he should not have danced as much. Leo does some dancing and Adam says that he is great and believes he should come back and sing more than dance.

Next up is Jeremy Briggs who loved baseball as a kid; it was all he did in high school. Jeremy even got a coaching position and after a year it wasn’t working for him financially so he got a full time job, but he wants to be a full time musician; he is a lead guitarist and vocalist for his band. Jeremy is singing “Bad Company”.

Blake hits his button. Shakira then hits her button.

Blake says his last note was just amazing and was sold on him from the beginning in his first verse; Shakira says that she started off doing a little rock and would love to work with him and she is hungry to win this show. Jeremy decides for Shakira to be his coach.

Next up is Jake Worthington who didn’t get the chairs to turn last time he auditioned but he is ready to go ahead and get them to turn for him this time; he learned from the coaches calling him out on his flaws and worked hard to improve. This time he is singing “Don’t Close Your Eyes” and when he broke his back all he did was sing and play guitar.

Blake and Adam are glad to see him back again; Blake is so happy and Adam says that he knew Jake was waiting for Blake to turn for him. Shakira says it was perfect and Jake calls Shakira perfect; Blake says she is the perfect woman but a crappy coach. Blake says that he loves how he was strong throughout the song and praises Jake on his song choice; Jake chooses Blake to be his coach.

Next up is Karina Mia who is 22 and did a lot of violin playing as a kid but sang a solo in a recital and it made her want to be a singer badly; Karina went to a college for music and still works a day job even though she wants to pursue music so much. Karina chose her song to show how much passion she has for music; she wants to do this more than anything. Karina is singing “Beneath Your Beautiful”.

Nobody turns for Karina; Blake says she has a very tender voice though her notes got a little crazy when she went for the big notes but loves her sound. Usher did agree that he wanted a more powerful not at the end but still loves her sound; Shakira agrees that she has a beautiful sound but didn’t feel the magic right there. Adam says her voice filled the room and says she has more to work on but should not give up.

The last person tonight is 17 years old Bria Kelly and she started music at 11 years old; she sang the national anthem for sports teams. Bria says it’s hard to balance school and her performing; but her dad helps he so much and believes he is the perfect band manager. Bob says he is glad to help her in any way he possibly can and her mother is very supportive of her. Bria is singing “Steamroller Blues”.

Blake and Adam hit their buttons right off the bat.

Shakira then turns around.

Usher then hits his own button to turn around

Usher believes that they have heard The Voice; Bria says she is 17 and Adam says he is as well. Usher says that destiny has brought them together. Blake says she is a stud; such a powerful presense. Shakria says that it was perfect and reminded her of herself and loves her powerful energy; Blake says he is her fan no matter what she decides. Usher says he wants to be a part of her music career and even shows her his grammy; Usher shows it to her and tells her that determination and hard work will get her on herself with him. Bria decides she wants Usher to be her coach.