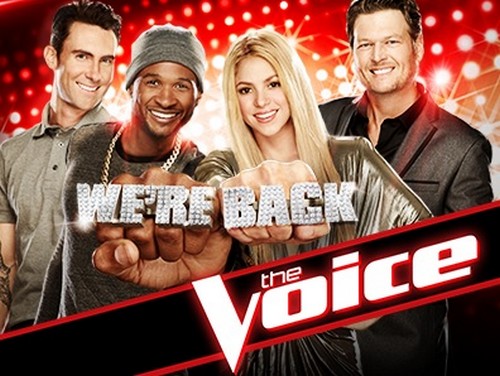 If the ratings are to be trusted then The Voice is hands down the best singing competition on television these days and NBC’s Emmy-winning show is back tonight for a brand new episode. In THE BEST OF THE BLINDS Carson Daly hosts a special recap of the blind auditions including never before seen moments and a sneak peek at next week’s battles.. Did you watch the last episode of The Voice? If not then you’re in luck because we recapped all of the detailed action right here for you.

On the most recent episode of The Voice the “blind auditions” continued and were held in front of a celebrity panel of coaches, including Adam Levine, Blake Shelton, Shakira and Usher. The strongest vocalists from across the country competed in the hopes of being selected by one of the coaches and to then fight for a chance to win the title of being named “The Voice.”

Tonight’s episode is going to be great because now that the blind auditions have ended it’ll be interesting to see if any of the coaches are regretting their choices after the fact. Adam Levine, Blake Shelton, Shakira and Usher take a look back at their decisions as they head into the battle rounds.

The Best of the Bands looks like it’ll be a lot of fun to watch and we’ll be recapping it live for you all right here. While you’re waiting for our thoughts you can always hit the comments and let us know your thoughts on the season of The Voice so far!

RECAP: First up we see team Adam and he is confident his team will win again this year; Usher thinks he is very focused and will once again do very well. His first four chair turn and artist to audition was Christina Grimmie; all the coaches were amazed by her talent. Adam believes that she is a huge star and has potential to win the competition; he is so amazed that he got her on his team.

Delvin Choice returned after not getting any chairs turned last season; the coaches were all very impressed with him this year and his song choice. Blake believes his performance was flawless, he also received four turned chairs; Adam believes Delvin is one of the most improved artists to ever come back.

We now see folk singers Dawn & Hawkes who totally stole Adam’s heart in their audition; it was one of the most real and genuine performances he has ever heard on The Voice. Adam was so happy that they chose him.

Adam, then won Cary Lane another of his 4 chair turn wins; he on average won all of them this season in the blind auditions. Blake believes she was a great singer and deserved the 4 chair turns; Usher would have done anything to have her but Adam out played him totally. Adam let her sit in his chair and really sweet talked her into picking him.

Next up we see Josh Kaufman who blew Adam away with his amazing and different voice, Blake said he belonged on this show perfectly and was sad he wasn’t on his team. Adam was excited to get him on his team because Josh was everything he wanted on his team; his performance was flawless.

We know take a sneak peek at Adam with Aloe Blacc to help his team in the battles round; Aloe believes mentorship is very important to teach these artists things he has learnt in his life.

We now take a look at team Shakira; she is excited to be back and wants to win this year of The Voice so badly. Adam says that Shakira plays the woman card a lot with every female artist; Usher says that she is very intelligent and that she can really do anything she wants. Shakira’s first artist was Kristen Merlin; Adam says she was a cool and unique country singer with a lot of skill. Adam fought really hard for her but Shakira won Kristen in the end having been chosen as her coach; Shakira believes her voice is one of her favorites and it felt good to beat Adam.

Next up was Deja Hall who was the youngest artist on the show this year; Shakira believed she was so angelic with a beautiful voice. Blake and Usher fought hard for her but in the end she chose Shakira; Shakira believes she is going to do so well in this competition.

Next up was Emily B and she once realized that she had an abnormal growth on her eye; having to get two brain surgeries and she felt like she had to do this after getting through that part of her life. Shakira believes Emily is really good and is glad to have her on her team; Blake says that he still is upset she lost Emily to Shakira.

Shakira believes her team has got this year in the bag; he is using Miranda Lambert who is Blake’s wife as his advisor. Miranda is really glad to be there with Shakira and working with other great artists discover themselves.

We now get a look at team Blake and he is hoping to beat Adam this year for ruining his win streak; one of his first artists were Ryan Whyte Maloney who turned 4 chairs. Each coach fought hard for Ryan, but Blake easily wins him over with his compliments and charm. Blake believes Ryan will be around for a long time on the show and that he has the drive.

Blake also got Sisaundra Lewis on his team after being amazed by her audition; he loved how she went back and forth from her main voice to her falceto so flawlessly. He even said he would have bought her record if it came out tomorrow; the coaches fought hard but Blake won in the end.

We now see Jake Worthington who came back this year after having failed to get a chair turn last year; Blake loved seeing Jake going home and actually taking notes. He was impressed with hearing how much he changed; Adam worked hard to steal Jake from Blake. But in the end Blake won Jake’s heart with his charm; it totally crushed Adam.

We now see Blake and The Band Perry to help him advise his team; he likes having the three of them to help his artists really discover not only their voice but their own confidence when performing

We now take a look at team Usher; he didn’t go for styles but incredible voices this year and wants to win. Usher’s first artist was Bria Kelly and she just amazed the judges with her amazing vocals; Usher believes when he heard her voice he knew that Bria could just be the winner of the show. He got Bria on his team after taking out his Grammy and saying she could win one with him.

T.J. Wilkins came from a bad neighborhood and wants to give his family a better life; Usher loves how his energy filled the room with his amazing voice. Usher believes that T.J. has the total package to win the show; Adam fought hard for T.J. but in the end Usher is victorious.

Next up is Jake Barker and it was his first time ever performing live on stage in front of people; Usher won him after turning first and believing he is one of the greatest voices on his team.

We now get a look at Usher coaching his team with Jill Scott and believes that he feminine touch is very important; she decided to come right away right when Usher called her.