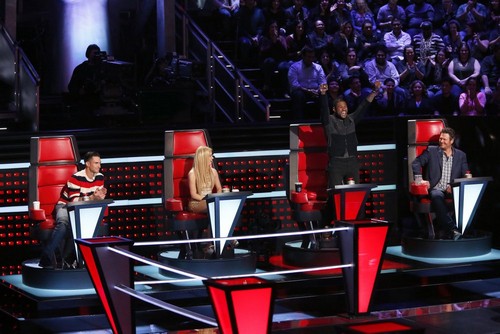 Tonight on NBC the Emmy award winning music competition The Voice is back with yet another round of completion. Tonight the battles continue with part 4.  Team members will be duelling in duets and the coaches will be enlisting help from fellow artists Aloe Blacc, Jill Scott, Miranda Lambert and the Band Perry to prepare their artists for battle.

On last night’s episode after a frenzied first week of battles the battles continued with the second week of battle rounds.  This season, the show will send the battle winners on to a second elimination round. And with only one steal remaining among all the coaches (Usher’s), Tuesday could be the most difficult night for the contestants yet as they fight to stay on The Voice.  Did you watch last night’s episode?  We did and we have a recap, right here for you.

On tonight’s episode The “battle rounds” continue and the coaches enlist the help of the music industry’s top recording artists to offer their knowledge and skills as advisers. Adam Levine teams up with Aloe Blacc, Blake Shelton with The Band Perry, Shakira with Miranda Lambert and Usher with Jill Scott. In this phase, the coaches pit two of their own team members against each other in a dueling duet. After the vocal face-off, each coach must choose which artist from their team is the strongest, and has the option of stealing losing artists from an opposing coach. Each coach has two steals during the battle rounds.

Next week rather than go right to the live shows we will have ” The Battles: Round Two” it will pit the remaining artists from each team—all previous winners and stolen artists—against one another to perform an agreed-upon song. Both artists will sing for their coach’s approval in hopes of moving forward to the Playoff Rounds.

Tonight’s Battles are going to be just as exciting as last week’s were. It will give viewers a good idea of who may actually be in serious contention to win THE VOICE this season so you’re not going to want to miss even a minute of the fun. We’ll be blogging it right here for you. In the meantime hit up the comments section and tell us your thoughts on part one and two of the Battle!

The first pair of tonight is from team Adam, Cary Lane and Sam Behymer:

Cary came to The Voice because he family supports her love for music and Adam fought hard for her. Sam came to The Voice wanting to prove to her family that she can make a career out of music. Adam gave them the song “Give Me Love” by Ed Sheeran; he believes this song will really high light their strong points. Aloe thinks Sam has a habit of giving a little breath in her singing and needs to make sure it doesn’t sound like a gimick; though he feels Cary is being a little pitchy. At the last rehearsal Aloe feels like Sam is doing a little yodle and wants her to quit it a bit; Sam realizes it herself and feels like she can stop it. Aloe feels like Cary is performing really well but she isn’t showing enough emotion; he wants them to stand out as individuals.

Blake says they both did really good and captured the mood of the song well; though Sam and Cary got pitchy at certain parts. Usher says it’s a matter of taste of who wins; they both have unique voices and can do well in this show. Shakira said they had really great moments and loved Sam’s unique voice more. Adam says that she hears a similarity in Cary’s and Sam’s tone; Adam believes the winner of the battle is Sam. Cary thanks Adam for stepping out his comfort zone to help her improve.

Next up is team Blake with Kaleigh Glanon and Noah Lis:

Kaleigh has been a duo with her father for a long time and really caught Blake’s attention with her voice. Noah was inspired by his grandfather to audition for The Voice who was his biggest support. Blake is making them sing “Everything” by Michael Buble; Noah is really happ of the song choice and feels like it could play to his advantage. Blake believes that Kaleigh has some amazing notes that just catch you; Noah feels like he needs to find places in the song where he himself can exploit himself. Keligh though is having trouble with being off beat; at the final rehearsal they only have to find a way to work on their harmonies.

Usher says it was a little showy from Noah’s part; he pulled it around and showed a great upper range. He liked Kaleigh’s tone and didn’t hear it till the end; though he would give the performance to Noah. Adam thinks they are both great, though he knows that this song was easy for Noah; he felt it was even but would choose Kaleigh. Blake says they took his notes and it was great; though some of the notes Kaleigh does at certain moments was great. Blake decides the winner of the battle is Kaleigh; he believes in her talent. Noah says thanks Blake for the great advice and it has been a honor to work with people as great as them.

Last up tonight is team Shakira with Cierra Mickens and Emily B:

Cierra traveled from Alaska to pursue her music career and decided that The Voice would be her best chance at success. Emily went through brain surgery and it was a hard time in her life; but got through it to pursue her love for music on The Voice. Shakira has them singing “Brave”, Emily is confident with this song and feels like she can really let loose her emotions into the song. Shakira feels like Emily is stuck in her melody and volume keeps changing. At the final rehearsal Shakira wants them to sustain a little more with their voices.

Adam says that was a bold song to since and felt the most challenging parts of the song was great though they had some problems; though Cierra really impressed him. Blake felt like Emily had a power note that really makes him give her the edge; Usher feels like they did a good job and splits the victory to both of them. Shakira loves Cierra’s voice though Emily has the determination in her voice and felt they were impressive; though they had the same mistakes. Shakira decides the winner of the battle is Emily, Cierra thanks Shakira and had the best moment of her life; Usher decides to hit his button right when she was going to make her way off the show. Usher says that Cierra in her blind audition and impressed him; he belives she has an incredible talent and now has the opprotunity to pick up where Shakira left off.