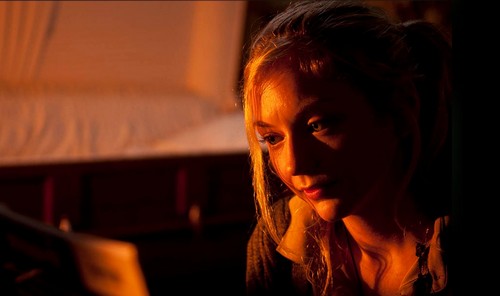 Tonight on AMC THE WALKING DEAD returns with all its gory goodness and a new episode. Tonight’s episode is called, “Alone” and on tonight’s show one group finds what may be an ideal shelter, while others realize protection is all around them..  If you happened to miss the last episode, don’t worry, we’ve got you covered. Click here for a full recap of the last episode to find out what you missed!

On last week’s episode it was all about Daryl and Beth – we got lots of background.  The show did not really move much ahead tonight.  We just got to see how Daryl and Beth grew close.

On tonight’s episode Maggie, Bob, and Sasha are in trouble.  Remember someone is suppose to die by the end of the season, I wonder if it will be Maggie.  Sasha is pretty sure that Glenn is dead.  Maggie hears her telling Bob.  Maggie still believe he is alive and writes him a message and leaves it at the Terminus.  Bob and Sasha go their separate ways.  Beth learns how to track and gets separated from Daryl.  Will her new tracking skills help her?

Tonight’s The Walking Dead Season 4 episode 13 is going to be exciting, and you won’t want to miss it. So be sure to tune in for our live coverage of the new episode of The Walking Dead — tonight at 9PM EST! While you wait for our recap, hit the comments and let us know how know how excited your are for the mid-season premiere of TWD and what are you hoping will happen this season. Check out a sneak peek of The Walking Dead “Alone” below! Don’t forget to come back at 9PM.

RECAP: Bob is walking with a machete in a forest; he is by himself and is hiding behind a tree now with zombies around him. Bob continues to walk and finds a little bunker; her closes it off with some branches and part of a fence; securing him inside. A walker tries to grab him from the branches and he just watches it; Bob is now walking down a road and finds a truck. Bob gets on top of the truck and just lays on top of it as a horde of walkers pass by, Bob just sits there after and gets off the truck. Bob is now walking down the road as he sees a motorcycle and car drive p to him; it’s Daryl and Glenn. Daryl walks over and Bob says hi; Daryl asks if he’s alone and Bob says he is and mentions being in several groups but survivng alone. Bob asks if they have a camp and Daryl asks him how many walkers he killed; Bob said over a dozen. Daryl asks who he killed, Bob says only one and it was because she asked him too. Daryl asks if he wants to go with them and BOb say yes; Daryl asks if he has questions. Bob says it doesn’t matter who they are; he gets in the truck and they drive off.

Bob, Maggie and Sasha are in a bunch of fog; they hear walkers but have no idea where they are coming from. They are back to back fending off a walker from any direction it may come; Maggie is close to being bitten but Sasha shoots the walker in the head. Bob got bit on his bandage and it’s only his bullet wound bleeding.

Sasha says they should wait till the fog is gone to do anything; Bob says that they will be fine and should take it easy. Daryl and Beth reach a cemetery; Beth needs to sit down. Beth looks at a tombstone; Daryl places a flower on top of it and it just says “Beloved Father”. Daryl holds Beth’s hand. Maggie and the gang find a poster talking about sanctuary if they follow the rail round; Bob mentions he heard a broadcasting from the place before and Maggie says they should go. Maggie believes Glenn would have went there for her; Bob says it’s smart to make way there.

Daryl and Beth head inside of the house nearby; Daryl leads the way inside checking if everything is safe. Beth is surprised it is so clean; Daryl believes someone has been keeping it clean and might be around. Daryl heads downstairs and finds bodies just laying around; Beth says it’s beautiful to see someone cared to give these corpses around a funeral.

Daryl and Beth find a bunch of canned food in the house; Daryl notices there is no dust on the food at all. He feels someone could be alive; they take some of the food and leave the rest. Beth says she knew there were more people; outside Daryl makes a trip wire incase some walkers come by; Beth is playing the piano and singing in another room. Daryl comes in and says he has the place secured; Daryl lays in a coffin and says it’s the best bed he has ever had. Daryl also tells Beth to sing for him since there is no jukebox.

Sasha wakes up and Bob is reading a message that Maggie left to not risk their lives for her. Bob saysthey can still catch up to her and that they should hurry; Sasha takes her time but decides to follow him. Maggie is on her own walking down a rail road, she finds another poster leading to the sanctuary and decides to mark it with a knife; a walker comes out of nowhere and Maggie kills it.

Sasha asks why Bob is so happy to be alive; Bob says it’s not about him being alive but it’s because he isn’t alone this time. Bob says that he was alone after he lost his first and second group; Bob says that Sasha is bullheaded like Maggie at times. Bob and Sasha find a walker dead with blood on a wall saying to Glenn that Maggie is in Terminus. Daryl and Beth are up and are going to have eat but Daryl hears something outside; Daryl looks outside to see a dog with one eye at the door; Daryl goes to touch it but he runs away. Sasha is listening to the walkers in the night, Bob gets up and tells her he is awake now; he asks if she sees anything. Bob mentions there are a lot of animals at night and it scares him; he mentions how he never slept when being alone. A walker is being too loud and Bob just can’t sleep; Sasha asks what the hell they are doing out there. Bob asks why she thinks Tyreese is dead; Bob tells her that Tyreese would go for Terminus and wonders if she is too afraid to find out the truth. Beth is leaving a thank you note to the owners of the place when they come back; Daryl says she doesn’t have to leave it and maybe they should stick around for a while to say hello to who ever comes back. Beth asks what changed Daryl’s minds; Daryl says that he doesn’t know and they then hear a sound outside. Daryl goes to open the door and there are a bunch of walkers; Daryl tells her to run and the whole group come in. Daryl tells her to get her stuff and get to a window; telling her he will meet her up the road. Daryl lures all the walkers further into the building and is now trapped by him self. He ends them off and starts stabbing all that he; Daryl trues ti escape from the basement and gets out just in time. Daryl is now running into the forest and finds a walker that he kills on spot; Daryl finds a car driving off with Beth and he runs off chasing it.

Bob and Sasha find another sign with blood telling Glenn to go to Terminus; Bob says they are close and should keep going. Daryl is now on his own running down a road trying to find the car that took Beth; Daryl is stuck at a three way road and has no idea where to go. Bob and Sasha find a nice building; she says that they can set up a lot of things to live there. Bob says he is not stopping since Maggie is alone; Sasha says she didn’t want them to go and Bob says he doesn’t care. Bob says when he got to the prison he wondered when everyone would die; Bob says he didn’t have to be afraid and hat when they get to Terminus it doesn’t mean Tyreese is dead if he isn’t there. Bob says this is it, Sasha says it doesn’t have to be; Bob gives her a kiss. Bob then walks down the rail road; Sasha then goes on her own to look inside of a building. Sasha goes up stairs and starts to cry; Sasha looks out the window and notices something. Maggie is sleeping with some dead walkers as disguise; Sasha runs out to Maggie.

Sasha  is killing all the walkers around her; Maggie comes over with a sign and helps kill them as well. Maggie asks where Bob is and Sasha says he is gone looking for her; Maggie says she heard what Sasha said at the camp. Maggie says she heard Sasha say the odds are Glenn is dead; Maggie says Sasha is wrong and then she asks Maggie why she is here. Maggie says she was waiting for Sasha; she isn’t giving up but needs the help. Maggie says that Sasha is afraid; Sasha admits it but says they have to go get Bob first. Daryl is by himself sitting down and all of a sudden he is met by a group of people; Daryl punches the guy and aims a cross bow at him. The guy tells them to hold up and starts to laugh; he gets up and Daryl keeps it focused on him. The guy says he respects Daryl with his bow; he wants a weapon like Daryl’s but doesn’t like how there isn’t much ammo. The guy says that if he pulls the trigger than he will be killed on spot; the guy introduces himself as Joe and Daryl tells him his name. Bob is on his own again walking down the rail road; Bob gets called out by Sasha and i surprised to see her with Maggie. Bob gives them both a hug; the three then keep on moving for Terminus. We now see Glenn looking at a sign for Terminus.