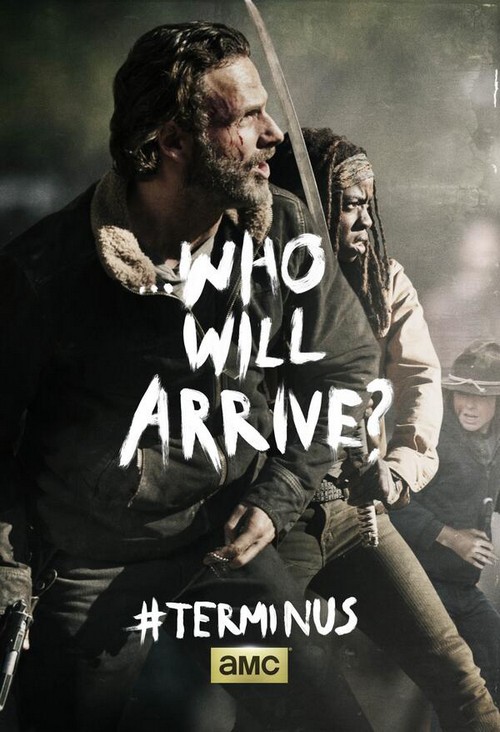 The Walking Dead returned to AMC tonight with its penultimate episode and on tonight’s episode Glenn got confirmation that Maggie was alive and on her way to The Terminus, by the end of the episode they reunited.  I cannot wait till next week’s episode when everyone starts to meet up at The Terminus.  Good news, we have have managed to get our hands on two sneak peek videod and some insight for you below on what is going on next weeks finale episode called, “A.”

On tonight’s episode Glenn was very excited as he walked on the train tracks he came upon a message from Maggie that told him she was going to The Terminus.  Daryl was still with the nasty  survivalists and the leader wanted Daryl to join their group. (this is the group that Rick escaped from in the house)  The survivalists have rules and Daryl is not interested in playing by their rules.  Meanwhile Glenn and Tara split from Abraham, Rosita and Eugene to take a more dangerous, but faster way to The Terminus.  By the end of the episode Glenn and Tara get into trouble and Maggie saves the day.  More happened!  Did you watch tonight’s episode?  We did and we recapped it right here for you.

Spoiler alert: If you’re one of those people who doesn’t like spoilers, stop reading now! We have some juicy spoilers for you about the season 4 Finale of AMC’s “The Walking Dead.”

On next week’s episode creator of the series Robert Kirkman described the finale as Savage and the biggest show TWD has ever done  and people will be talking about it for a long time.  Robert also revealed the finale will be a huge cliff hanger and will make waiting for season  5 even harder.

After tonight’s episode we know that Glenn, Maggie, Tara, Bob, Sasha, Abraham, Rosita and Eugene have all arrived at The Terminus. Meanwhile, Rick, Michonne and Carl are headed there in one group and Daryl and the vicious Survivalists in another.

In the first sneak peek released for next week’s finale there is not much.  We see Rick, Michonne and Carl and Rick is teaching Carl how to hunt.  Then a voice screams out yelling for help and Carl gets up and starts running.  Rick gets up and tries to catch Carl.  On our second sneak peek there are just a lot of scenes that flash by but nothing concrete.  Check them out.

In good news, on next week’s Talking Dead Andrew Lincoln who plays Rick on The Walking Dead will be on the couch answering questions after the finale.

The Walking Dead Season 4, Episode 16 Finale “A” airs on AMC on March 30th, 2014. People familiar with original comic book series written by Robert Kirkman claim that the show is sticking more closely to the original story this season. Check out the preview videos from the season  finale below and let us know in the comments below what you think!