Thunder From Down Under Stripper Shot While Fighting Thief 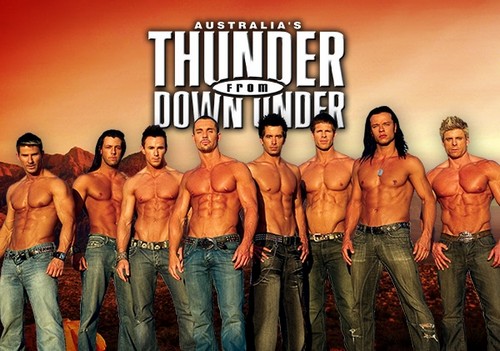 Australian male revue group Thunder from Down Under lived up to their name when they tackled an armed assailant who was attempting to rob their dressing room in Las Vegas, Nevada. Apparently, several of the dancers caught the assailant rifling the through the belongings of the dancers no doubt looking for bills covered in baby oil and pheromones. Once caught by the cast members, the robber was tossed outside, where he promptly pulled a firearm and fired a shot Into the air probably in an attempt to unravel himself from the oily mass of muscles and knuckles.

Security held the assailant until the police arrived. Only one of the members sustained any injuries after being hit by stray bullet fragments… but I bet he’s still hot so you know, all’s well that ends well.

Allow me to preface my commentary by saying good LORD those dudes are obscenely attractive. When I first saw then the word ‘yummy’ popped into my mind, and I absolutely abhor that word on the lips of grown women. We’re not dealing with the dolts from The Full Monty here, these guys are committed to entertaining drunk bachelorettes and desperate housewives. Their bodies are sick, but sick in the best way possible. All together they have like a 48 pack. That being said I’m just gonna go on record and say that I do not feel comfortable sharing the earth with people this attractive. They are like unicorns…too beautiful to exist and us normal people have to compete with them. It’s not fair I tell ya. The playing field definitely needs to be leveled here, I’m gonna need one of these guys to have an offensive body order or at least be aggressively stupid…like forget-to-breath stupid.

Anyway, according to the authorities, the assailant was under the influence of some illicit substances, and that makes sense considering he picked the wrong guys to rob. If I wanted to rob someone it definitely wouldn’t be a group of guys In the best shape of their lives. No, I’d rob the overweight asthmatic with low self esteem. I would steer clear of the guy who lives in the gym and makes his hard earned money tweaking for crazy women who have imbibed too much liquid courage. Bad move crazy unnamed assailant, bad move indeed.