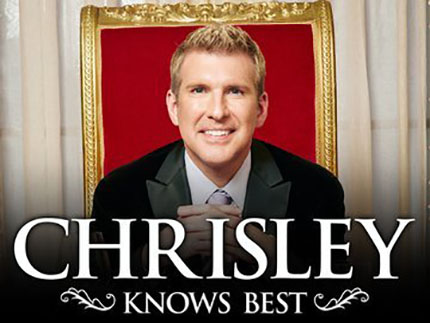 USA’s new reality show Chrisley Knows Best has been doing unexpectedly well since it premiered last month. Just today the network announced it has already ordered a second season. Viewers across the country are raving about the series, which follows the lives of Todd Chrisley, his wife Julia, and their five children. What’s to rave about? The hilarious family of millionaires dripping with Southern Charm that march to their own drummers have even been labeled as the new wave of Kardashians. It turns out the Chrisleys actually have a lot more in common with the Kardashians than we all realized: Much like the Kardashians, their show is also ridiculously fake and scripted.

Todd and Julie Chrisley’s oldest son Kyle battled a drug addiction recently. He currently is getting his life back together and clean and sober (living with his 70 year old Grandma has probably helped a lot). Todd has referenced Kyle’s drug problems more than once on Chrisley Knows Best, and has also mentioned more than once that he “spent millions of dollars” on Kyle’s rehab treatment and various facilities. On the very first episode of their family’s reality show Todd blatantly said, “I have spent millions of dollars trying to help Kyle find himself.”

It turns out Todd is completely full of it and, as he would say, “talking out his ass.” He never paid for Kyle’s rehab. Kyle Chrisley went to rehab and Todd never paid the bill. So, the “millions of dollars” Todd brags that he paid on the show to help his son, is a total lie! According to Radar Online, Todd apparently paid Creative Care a total of $18,000 (not millions). And, after a few months of treatment, he checked Kyle out of the rehab and never paid the rest of the bill. Creative Care Rehab actually sued Todd Chrisley for the $24,000 that he still owes them.

So, in a nutshell, Todd totally bragged that he spent millions on Kyle’s rehab when he actually spent $18,000. And he apparently still owes the rehab an additional $24,000. That sounds an awful lot like the Kardashians showing pictures of a mansion that they don’t even own on their reality show…am I right?

Update: Radar Online reports this morning, April 15, that not only did Todd not pay the rehab bill but that rehab failed for Kyle. Two years plus after graduating from rehab Kyle was arrested for beating up a woman!

[Kyle was charged with] misdemeanor simple battery, or intentionally making harmful physical contact, against an African-American woman named Tracy Gordon. Further details of the incident were sealed by the court.

Chrisley was placed on probation, and after six months of good behavior the case was dismissed on October 8, 2013. But Gordon refused to accept the verdict, filing her own application for a subsequent warrant against Chrisley — a practice that is permitted in Georgia.

After several hearings, her application for a warrant was finally denied in February of this year.

Add this to the Chrisley mix and the family is looking more and more unsavory each day. In any case CDL will be live recapping the ‘Chrisley Knows Best’ reality show tonight! Why do I think we won’t be seeing much about Kyle’s assault of a woman on the show?