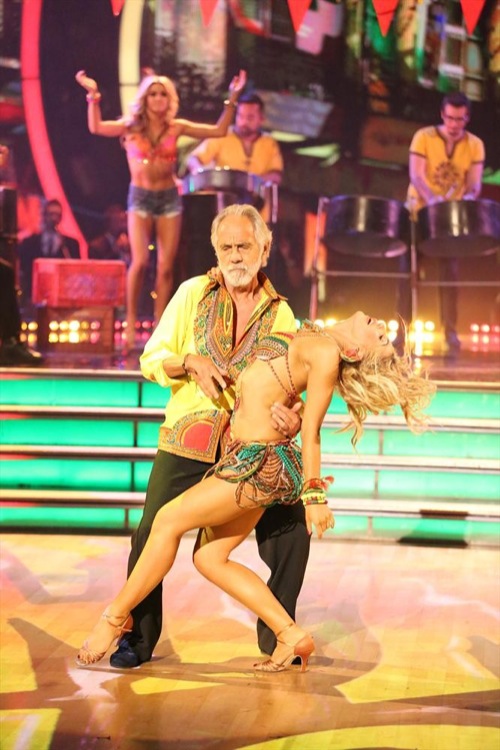 Tonight on the season 19 week 6 of Dancing with the Stars Canadian comedian, actor, writer, director, activist, and musician Tommy Chong & his partner Peta Murgatroyd danced a Foxtrot routine to “September” by Earth,Wind & Fire.  On tonight’s episode the the nine remaining celebrities performing to a mix of his hits and personal favorite songs. Dance styles will include Salsa, Rumba, Foxtrot, Tango and Jazz. At the end of the night, one couple will face elimination. Did you watch tonight’s performance episode?  If you missed it we have a full and detailed recap, right here for you.  If you missed any of tonight’s videos we have them all for you too!

On last week’s episode and the switch up Sadie performed a Mambo routine and Carrie-Ann like it saying,“I think the song choice was too slow for the mambo. You got the groove going on though.”   The judges scored Tommy a 23/40.  If you want to see his Mambo from last week, you can check the video out here.

Tommy Chong and professional dancer Peta Murgatroyd: dancing a Foxtrot routine. Tommy has been getting ready for his dance and tweeted about this week dance, “Who’s ready for DWTS? I’ll be trotting out with the foxy ms Peta, make sure to vote afterwards”

Judges’ comments: Carrie Ann: “I love when you dance the whole room gets behind room, great job.” Pit Bull: “You are the most interesting man in the world, I really enjoyed it.” Julianne: “That was so awesome, Tommy from week 1. I think that you could be in the competition for a long time.” Bruno: “The old magic is back again, you were better on hold though.”