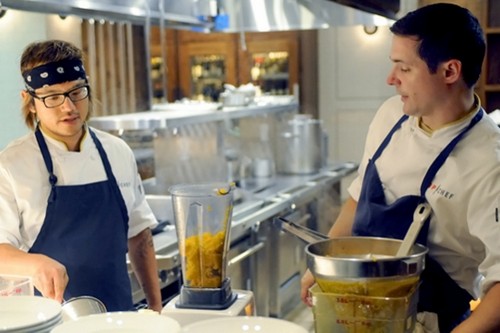 Tonight on Bravo TOP CHEF continues with an all new episode and the season finale.  On tonight’s episode the final two chefs face-off in Hawaii as they vie for the title of Top Chef.

On last week’s show the final chefs headed to Hawaii for the big finale. In Maui, the Final 3 learned which chef from Last Chance Kitchen will be rejoining the competition. Their Quickfire featured a Hawaiian staple. . . Spam. The pressure was on to create the best dishes with Hawaiian canoe crops since the double elimination will send only two chefs went to the finale. Guest judges: Peter Merriman — Chef/Owner Merriman’s Kapulua and Sam Choy — Chef/Restaurateur.

On tonight’s show after a long journey competing in 30 challenges from New Orleans to Maui, the final two chefs must execute the best service of their lives while opening pop-up restaurants to win the title and the bragging rights to be “Top Chef.”

Don’t forget to join us for our live recap tonight at 10:00pm when Top Chef Season 11 finale  airs on Fox.  While you wait for the recap, let us know how your enjoying this season of Top Chef.  Check out a sneak peek of tonight’s finale below.

when he worked, but coming here has truly tested his skills. Padma introduces them to their final challenge, they will be taking a restaurant under their wing and make a four course meal to serve; they will have two group that eat at different times. Padma says that Nic has an advantage from winning the last challenge.

Nic mentions how he left his job to be on Top Chef, to win the money would help him own his own business; he doesn’t want to work for anyone anymore. The old contestants are brought back, Nic’s advantage is that he gets to choose his three to work with him; he takes Jason, Louis and Brian. Nina chooses Shirley, Stephanie and Travis. Nina believes her team is much stronger; the remaining three get to go to the beach with Padma. Nic is creating his menu for his restaurant, he is confident it will be great.

Nina and her team are deciding what to do; she is dedicating the menu to her father and will be using Caribbean ingredients and is deciding to take some risks. The teams go to Whole Foods to pick out their ingredients for their planned menus, they buy several ingredients.

Travis gets to the kitchen and there is no ice cream machine for her desert, she is pretty screwed right now trying to figure out what she is going to do with her already bought ingredients.

Nic is planning out what everyone on his team will be doing, he is telling his teammates exactly what he wants done and making it clear he’s the boss. Nina gets to cooking right off the bat and is planning to make Zeppole instead of her ice cream; she gets her team in order and prepares them for what they have to do.

Tom and Emeril come to check out Nic’s team, Nic tells them what he’s got planned and will win with his technique and taste. Nina says that Tom was playing a mind game with her telling her she doesn’t need to do a desert; but she makes it clear even though she hates deserts she wants to give a try at her weakness.

As the time is being count down Nina is slightly worried because she doesn’t know if her goat will be tender enough, both kitchens are finished cooking and are being driven out to go have dinner with Tom and Emeril; they actually had their family members come out and surprise them. They all eat dinner together; Nina says that winning would be an achievement for her but even her island is supporting her a lot.

It is now service day, Nic is really pumped and is ready to give it all; Brian believes he is a great leader. Nina notices her goat is not tender enough; she continues to keep cooking it to get it to her standards. Both Nic and Nina tell their staff what to do, Nic is missing some servers and feels it is annoying to him; he tells others to tell them what they missed.

The guests start coming in and they are preparing their meals for the judges; Nina starts them off with her bread service; the judges love it.  The first course is a tuna tartar; the judges believe it is a food start.

Nic is nervous because Miyamoto is eating his fish and he believes he can’t impress him; the judges like it quite a bit but felt it could use more sea salt. They next scallop and noodles kind of gives the judges a confusing saying it’s good, but the scallops don’t work.

Nina serves the judges her goat and they all really enjoy it, next she gives them swordfish and they think the kale doesn’t really work that well. Nic tasted the duck and felt it was a bit tough so they cooked it mor, he gives it to the judges and they feel that it was really good. He gave them a panna cotta which he struggled with in a previous challenge; they actually really like this one.

Nina gives them some her chocolate covered zeppole and the judges like it but it’s not an incredible ending to the meal; but it was good.

Nina is serving her last dishes and the judges are not completely impressed with her two final dishes; they felt she could have ended it with a bigger bang as well.

The judge’s says that his fish could have used more salt, but his noodles were Tom’s favorite. They felt the duck was pretty good as well; the judges felt his desert could have had a little more to it. They now mention that Nina’s first dish was really good to start off the meal, they all love d her second dish as well.  The judges tell her that the desert wasn’t the best though; it just didn’t feel like it was enough.

The judges say that Nina gets the first course and the second course goes to Nina as well; they give Nic the third course since Nina’s fish was too salty. Nic then wins the desert and they have ended up at a tie for the chefs. The judges are really conflicted on who to choose as the winner, it’s the hardest choice they have ever had to make.

The judges bring in Nina and Nic, Padma says that one of them will be the winner of Top Chef and Tom says the best thing about the competition was getting to know them and that it was the most difficult choice they ever made. Padma says that Nic is the Top Chef; he can’t believe it and is just so excited and speechless. Winning means a lot to him and his family; Nina says she is disappointed but is still proud of the work she has done.