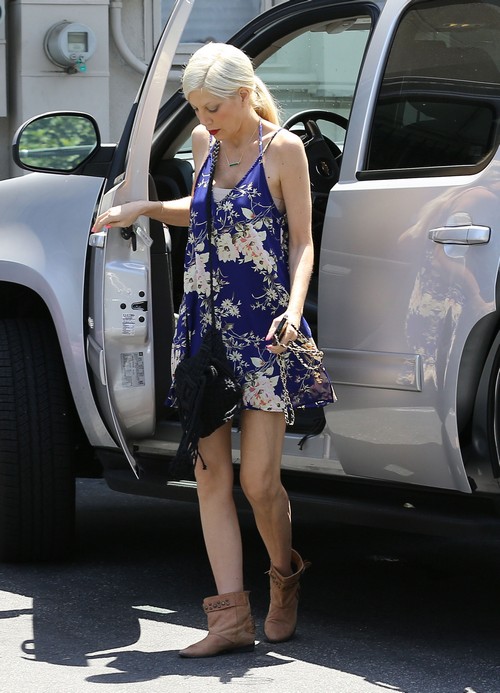 Man, this is getting ridiculous. Tori Spelling is such a terrible actress that she can’t even pull off faking emotion for her own show, True Tori. AS IF the whole world didn’t already know that Dean McDermott was a serial cheater, but Tori had to come to this ‘realization’ on national television. Sure, Tori, sure. You didn’t know that Dean cheated on your like a hundred times before this. Sure.

For those of you who haven’t been watching the train wreck that is True Tori, Tori and Dean have been going to couple’s therapy sessions to work out their issues. Obviously, this has been chock full of [fake] drama and [made-up] fights, but on the most recent episode, Tori decided to open up to the therapist after Dean stormed out, saying, “Maybe the truth is that he’s been doing this all along, and we would never even know. Maybe this is just the one time he got caught.”

Again, it’s hilarious seeing Tori pretending as though this was new information to her. First of all, she’s a bad actress and seeing her pretend to figure this out was funnier than it should have been. Second of all, Dean’s cheating has been an open secret for many years now, and we’re supposed to believe that his own wife didn’t know about it? Sources close to Dean and Tori aren’t exactly tight-lipped about their marriage situation, and we already know that this whole TV show is just a sham for them to make money. By staying together and making it seem as though they’re fighting about Dean’s infidelity, they’re able to maximize the publicity on their sham marriage, and dupe as many viewers as possible in the process. Well, we ain’t buying it, but nice try.