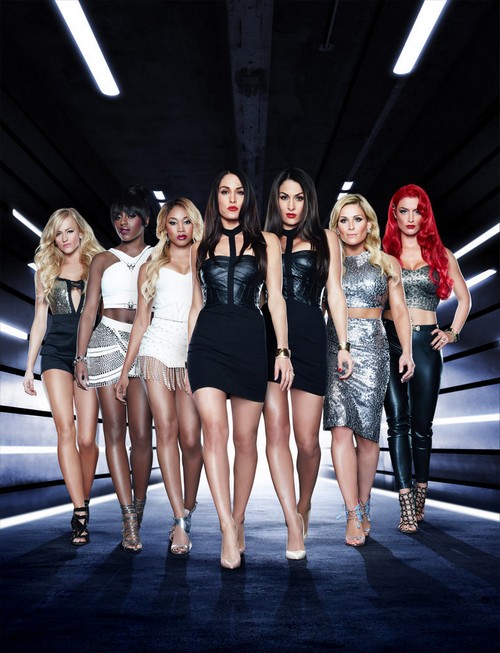 Tonight the second season of Total Diva’s will premiere on E! at 9PM EST. In the Season 2 premiere, Nikki faces life without John Cena as her boyfriend; Summer Rae debuts on the main roster; and Eva Marie deals with her parents’ reaction to her elopement. Did you watch the season 1 finale of Total Diva’s? If not don’t worry because we recapped it in detail right here for you!

On the season finale Brie Bella got engaged to Bryan while her sister Nikki’s relationship with John Cena hit a major snag. She wants to eventually get married and have kids and neither of these things interest John. In fact he has told her point blank it’ll never happen if she stays with him. Also Eva Marie surprised her family with engagement news and they were livid.

On tonight’s season two premiere: Nikki faces a life without her boyfriend, John Cena. Summer Rae joins the main roster and Eva Marie faces her parents after they find out about her elopement.

Tonight’s premiere of season two of Total Diva’s is sure to be great, especially since we were left hanging by just about every cast member! Tune in at 9PM EST to E! and we will also be recapping the episode right here for you! In the meantime, should Nikki stay with John and give up her dream of having a family in favor of his admitted selfish lifestyle? Tell us your thoughts in the comments below!

The new season begins with the ladies meeting with Sean Cleary and Mark Carrano to discuss PR. They tell Summer Rae that she’ll be traveling with Eva Marie. Summer Rae talks about being paired with Fandango and enjoying having more time to perform. Summer Rae talks to Eva Marie after and seems to already be on the wrong foot with Nattie. Eva Marie comes to check on her costume with Sandra and ends up having to give up the details that she eloped with Jonathan. The twins are shocked and Sandra tells her how a parent would feel about an elopement after Eva Marie shares that she has not told anyone. Nikki talks about seeing John at work and how difficult it is. She has been staying with her mom. Nattie is brought up to speed on Eva Marie’s marriage. Nattie understands why Jonathan wanted to lock her in.

Nikki and Brie are celebrating their thirtieth birthday together. John texts Brie asking her to wish Nikki a happy birthday for him. She doesn’t seem too shaken when Brie tells her about the text. At the club, Nattie tells the ladies how drunk she is. Ariane and Nattie get into it because Nattie was dancing on her man. After they go outside to discuss it in an animated convo, police come and tell them to calm it down or they will go to jail. Nattie hauls ass inside and the girls giggle after ditching the officer.

Eva Marie and her hidden hubby are driving when her mom calls saying that she wants to visit. Eva Marie tells Jonathan that he will have to stay in a hotel when they come, and he gets upset telling her that she needs to be honest and tell her parents the truth. Even though he opposed, Eva Marie is having him go to a hotel. They are packing everything of his up and moving everything out. Too bad Eva Marie just told him he cannot take the car!

At Wizard World Comic Con the twins sign autographs and meet fans. John comes over and gives both girls a hug, but a much more meaningful one to Nikki. Later, Brie and Brian ask Nikki to go shopping for their wedding registry. After a short while Nikki leaves..she cannot take all the wedding stuff. Later they have a good talk and Brie tries to offer some good advice. Nikki may be regretting that she walked away from someone she loved because of marriage.

Summer Rae is up against Nattie and there is some underlying beef there as Nattie is not a fan of Summer Rae. She said there should be one chief in the ring, not two and Summer Rae is trying to act like a chief. Nattie is clear that she is stronger and is all smiles when she is names winner of the match.

Eva Marie opens up to Trinity about how worried she is about her big lie and how it could affect her family. Back at home she awaits her family and decides that she has to tell them when they arrive. Once they are all talking, Eva Marie is dropping hints about her marital status, but no one bites. Jonathan arrives (as if he is only visiting) but he forgets to take off his wedding band. Nervous, he ends up fidgeting and playing with the ring. That was all it took! Finally..the question…”Did you two get married?” Her parents are so sad and it brings tears to her eyes. Upset, they leave shortly after with her dad saying he is tired…tired of all this.

Nikki is at home and gets a text from John asking her to dinner. She calls Brie to get her opinion. He begs her to see him in two hours from the time of the text. He is coming to San Diego just to see her.

Eva Marie and Jonathan are on the way to see her family. When her brothers share how upset they are, Jonathan defends his wife and his marriage. The brothers asked if she was confirmed before marriage and she tells them she was not, but questions the family’s religion and beliefs when she goes right back to her brothers about living with girlfriends before marriage. Her dad storms off saying she disrespected the family and Eva Marie is heartbroken.

Nikki arrives to meet John. He is waiting on the end of a pier at the ocean with two wine glasses in hand. He is dressed in a suit and looks as though something serious is coming….but sadly…the first episode ended right here leaving us with a cliffhanger. Tune in next week for all the details on next week’s episode!