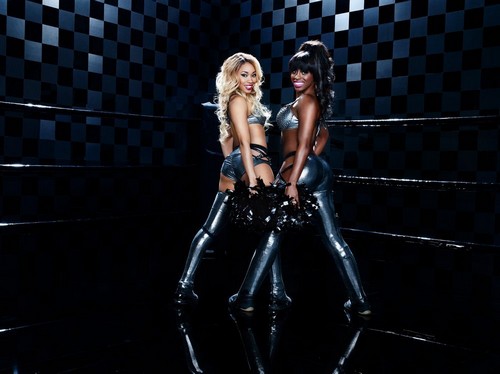 Tonight on E! TOTAL DIVAS continues with a whole new episode called, “For Better or For Worse.”  On it,  Nikki and Ariane help Nattie get back into dating. Eva has health problems. Trinity discusses getting married.

On last week’s episode Nattie faced surgery after a nasal injury, Nikki suspected John Cena of lying, and Trinity made a music video.  Video vixen Trinity dropped it like it’s hot for her music video on “Total Divas”–and ended up ripping her skin-tight jumpsuit.  Did you watch last week’s episode?  We did and we have a recap, right here for your enjoyment.

On tonight’s episode Trinity wants to get married but not without Jon’s father’s blessing; Eva faces a serious health issue, while Nikki and Ariane help Nattie get her groove back.  WWE Diva Brie Bella shows what she’s working with on “Total Divas.” Plus, you won’t believe Nattie’s embarrassing moment!

Tonight’s Season two Episode 5 of Total Diva’s is sure to be great, especially since we were left hanging by just about every cast member! Tune in at 9PM EST to E! and we will also be recapping the episode right here for you! In the meantime, should Nikki stay with John and give up her dream of having a family in favor of his admitted selfish lifestyle? Tell us your thoughts in the comments below!

Tonight’s episode begins with Trinity and Jon talking about marriage and Trinity pushing Jon to get his father’s blessing. She is worried that her dad may object because she is not Samoan. The couple runs into Jon’s father later in the day and Jon is visibly nervous. Trinity wonders if he knows his dad will be upset and he is just not telling her about it. Jon tells him the plan that they plan to get married the next week. Trinity jumped in and shared that she wouldn’t feel right if he didn’t know. He is really surprised and caught off guard..he just finished a match and wasn’t expecting to hear that his son was planning to marry in a week! He takes a few breaths, shares his shock, and then shares his happiness because he simply wants them to be happy.

They all hug and are all very relieved. Later, they happily arrive in Hawaii and are super exited to see their luxurious place as they prepare for their wedding. At the dinner the evening before their special day, the two families are interacting and everyone is having a great time. Trinity can’t help but notice that Jon’s dad still did not arrive. They go out for a walk on the beach and Jon shares that he is not coming. He looks really torn up, trying to hold in the pain he is obviously feeling. The twins then share a nice, sentimental conversation as Trinity comforts Jon and he begins to feel better. The next day, it is the day the couple has been waiting for. Trinity comes down the steps to meet her crying dad who is so happy for her. He proudly walks her down the aisle to the beautiful spot right on the beach. They share some emotional vows that brought tears to everyone’s eyes, and exchange their rings.

Meanwhile Eva Marie is at the doctor’s office describing some strange things happening to her body right now. She is really concerned about her health issues and shares that she has recently peed blood. She ends up finding out that she has a cyst on her ovary. She has to stay bedridden and is really upset because she’s worried about how this may impact her job. She learns she has a misshaped uterus and will have to have more testing done. Later, Eva Marie is driving and gets a call about her test results. She begins to cry and shares that the news is so bad she doesn’t even want to tell Jonathan. Later, when he gets home she shares the news that there is a good chance she won’t be able to have children. Eva Marie knows that is something that is very important to her husband.

He is shaken, but comforting and tells her that they can go to a specialist and reassures her that they, as a couple, are okay. She is also sad because she doesn’t have her family around since they are not speaking because of the whole husband cover-up. Despite Jonathan wanting her to call her mom, Eva Marie won’t. He ends up calling her mom. Eva Marie then gets on her phone but ends up in tears when her mom isn’t as nurturing as Eva Marie had hoped. After she shares what has been going on, her mom softens and vows to get through it with her daughter. Later, her mom and dad come to see her. She is nervous but they greet her with a big hug. They start talking about the past a bit but the focus is more on the future and they all seem quite content and much better than where they left off the last time they saw each other.

Ariane, Nattie, and Nikki are working out together. Ariane calls her sex therapist for Nattie and tells her that she believe her friend could benefit from her services. Nattie reluctantly agrees so she can hopefully ass some spice to her sex life. Later, Nattie and TJ meet with the sex therapist. TJ is not happy about it because he sees no problem. Nattie is more open to it, but both seem a little intimidated when the therapist walks around the home with them, sharing all of the different encounters they can have. The therapist started asking about how they met and their first night of sex together. They begin reminiscing and it ends up being therapeutic and sweet. The next day, Nattie’s girlfriends want to know all the details from her night after the therapist’s visit.

Tonight’s episode ends with the the wedding party getting down dancing and celebrating the marriage of Trinity and Jon. Visit us here next week because the Bella twins will be working on a video shoot with Trey Songz, and TJ gets into trouble with Nattie. You won’t want to miss it!