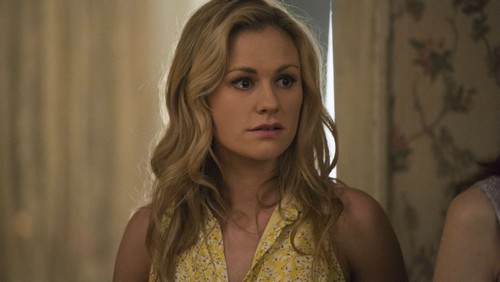 Tonight, TRUE BLOOD returns for its fifth episode of season 7 called “Lost Causes.”  On tonight’s episode, Eric and Pam go to Dallas for a fund-raiser, but are also on the lookout for an elusive foe, Sarah Newlin.

On the last episode, in the aftermath of yet another bloodbath, Sam (Sam Trammell), Sookie and Jason found themselves the bearers of bad news in Bon Temps and beyond. Pam recalled the events that led her and Eric to Shreveport and Fangtasia. Bill (Stephen Moyer) and Jessica (Deborah Ann Woll) got nourishment from unexpected sources. Following a new lead, Sookie enlisted a band of vampires and humans to track down the H-Vamps. Did you watch the last episode? If you missed it we have a full and detailed recap, right here for your enjoyment.

On tonight’s show, Eric and Pam go to Dallas for a fund-raiser, but are also on the lookout for an elusive foe. Meanwhile, Sookie is a reluctant host for a mainstreaming party in Bon Temps; Andy carefully considers an important decision; and Bill recalls his human history.

Tonight’s new episode is going to be a bloody exciting one, which you won’t want to miss. So be sure to tune in for our live coverage of HBO’s True Blood’s fifth episode of season 7 called “Lost Causes,” tonight at 9PM EST! Remember also to bookmark Celeb Dirty Laundry and check back here for our live True Blood recaps, reviews, news, and spoilers! In the meantime, check out a sneak peek of tonight’s episode below.

Tonight’s episode opens with where we left off last episode with the aftermath of the fight at Fantasia.  Willa does not want to go with Eric and she is ranting about Eric did not pay attention to her and she only learned anything because of Tara.  Willa things that Eric was a terrible maker.  Eric tells Willa that he agrees he was a terrible maker.  Eric lets Willa know he is going after Sarah Newlin.  Willa tells Eric she won’t go with him but if he releases her she will tell Eric and Pam everything she knows.

Eric releases her and is in pain, Pam says, “It’s like getting hit in the kootch isn’t it?”  Willa tells Eric and Pam that Sarah is with her sister Amber that is a vampire.  Eric and Pam are shocked that Sarah could have a vampire sister.  Willa lets them know she thinks that Sarah is in Dallas.

Eric and Pam head off to go to Dallas.

Sookie comes home and sees Alcide’s coat she looks upset.  Lafayette and James show up to see how she is holding up.  Sookie feels the house is so empty, she is heartbroken.  Sookie wants to clean-up because Jackson is coming in the morning.

Lafayette is not having that and puts her upstairs to bed, Sookie asks him not to leave.  Lafayette promises to be there when she wakes up.  He wishes her goodnight.

Sookie wakes up she hears a noise.  She comes downstairs and her living room is full with food and candles lit.  Jackson walks in and tells her when she is ready to go through Alcide’s things he will help her.  Sookie asks Lafayette why there is so much food.  It seems the whole town is coming over.  Sookie is upset because they want to throw a party and Alcide just died yesterday.

Meanwhile Bill knocks on the door with flowers.  He did not have alcohol to bring so he brought her flowers, “His mother taught him never to show up empty handed.”

Eric and Pam show up at Sarah’s sister Amber’s house.  Amber swears that Sarah is not there.  Amber’s man Jeremy died of Hep-V and Amber is infected too.  Eric tells Amber that Pam and him are going after Sarah.  Amber asks if they are, “going to kill her.”  Eric tells her yes and she says you can count her in.  Pam decides that she likes Amber.

The party is rocking at Sookie’s house with DJ and all.  Everyone is drinking up a storm.  While Bill is watching all the fun he starts to have flashbacks to when he was a human in Louisiana.

Tara’s mother, Lettie Mae shows up at the party.  Lafayette tries to get her out but Sookie invites her to say something about Tara.  Lettie Mae tells them all that Tara was a hero too because she saved her.  She asks everyone to raise a glass to Tara.

Meanwhile Jessica is outside and Andy comes up to her and asks her to come inside.  Jessica tells Andy she cannot.  Andy lets Jessica know that her guilt is making life very difficult for her.  Andy tells her he is moving forward and he is going to need her help.  He wants a ring he can borrow.  Jessica realizes that he is going to propose to Holly and needs a ring.  Jessica says she knows where there is a ring and goes to see Sookie and asks for her grandmother’s ring.  The ring was left to Jason but Violet tells Jason she does not need a ring she knows Jason is hers.  Jason gives Andy the ring.

Andy comes downstairs to the party and finds Holly.  Holly asks him, “what is wrong.”  Andy gets down on his knee, “Holly I don’t know what I am about to say, I have been waiting for the perfect moment and something keeps getting in the way.  It wasn’t till you went missing I realized it was me.  I don’t deserve a women that is beautiful like you and kind like you.  Please wear this ring.”  Holly, “YES!”  Andy, “I didn’t ask you yet.”  Holly, “Sorry I jumped the gun.”  Andy, “Holly I love you with all my heart will you marry me?”  Holly, “YES!”

Arlene sees that Sookie is upset and takes her upstairs to talk to her.  Sookie tells Arlene that she cannot believe that Alcide is dead.  As  Arlene and Sookie are talking Jackson is eavesdropping.

Meanwhile Lafayette and James are outside talking.  James is frustrated he feels Jessica is stringing him along and just gives him enough to keep him around.  Lafayette tells him he gets it and then he starts playing with James’ hair and kisses him.  They both keep kissing… oops..

Over with Pam and Eric, they are going to the Gala and Pam has a sparkly dress on she looks in the mirror and says she is a, “republic c*nt.”  Eric takes his shirt off and she gets upset she tells him he is stage 2.  Eric tells Pam he is going to die and asks her to cover the veins that will show so they can go to the Gala.

Back at the party the vampire who saved Arlen comes over and Arlene says he keeps looking at her.  The Vampire tells Arlene she is the most beautiful women he has seen in 300 years.

Meanwhile Jessica is looking for James he goes outside and sees James and Lafayette making out in the car.  Jessica starts screaming that James is an, “incredible asshole.”   Jessica comes in the house and asks Jason to rescind James’ invitation to the house she tells him that James was f**king Lafayette.  Jason rescinds his invitation.

Jason ask Jessica why it never occurred to her that James was gay after all he is a sensitive musician.  Jessica tells Jason that James is not gay he is just confused.  Lafayette knocks on the door and lets Jessica know that James is not for her, that Jessica never took any time to find out anything about James.  He tells Jessica that James is, “a good man” and if she does not want him she should let him go and Lafayette will take care of him.

Back to a flashback with Bill during the civil war time when he was human.

Sookie sees Bill outside and she asks him if it is safe to come outside.  Bill is leaving and Sookie grabs him, hugs him and thanks him for, “seeing her the way she cannot see herself sometimes.”

Sookie heads back to the party and hears all the voices.  She hears Lettie May says she is going to have to stab Willa to get vampire blood to hear what Tara needs stuck on the other side.  Sookie runs over and sees Lettie Mae going after Willa and stabs her.  They pull Lettie Mae off Willa.  Lafayette takes Lettie Mae out of the party.  Then Sam’s pregnant girlfriend has a meltdown because people have died and they are celebrating.  Sam takes her home.

Jason and Jessica talk, Jessica thinks that maybe Lafayette was right.  Jason tells her that he is having second thoughts about Violet.   He tells her that Violet is not the person he wanted to put his grandmom’s ring on…  Jessica tells him he is the sweetest man in the world and starts kissing him…..

Pam and Eric are at the Rebulican Gala and Pam tells Eric that the Gala is one of the most disturbing thing she has ever seen.

Then we are over to the bathroom of the Gala and Sarah walks in and says, “Mama.”  Sarah tells her mother she is in big trouble and she needs help, now.  Sarah asks her mother if Laura Bush is there.  Her Mom tells her once the book came out saying she created the bad blood that infected the vampires Laura stopped taking her calls.  Sarah admits she was the one who did it but she needs help the Yakuza, Japanese gangsters are after her.

Back at the party Jessica and Jason are having sex and Violet overhears them.

Back at the Gala Eric glamours Sarah’s father and asks if he knows where his daughter is.  Just as he is talking the Yakuza breaks in and starts shooting.  Sarah and her Mom start to run and the Yakuza runs after her as she gets to the end of the hall Eric is there and grabs her by the neck lifting her up.  The Yakuza comes forward and Eric drops Sarah and goes and kills the Yakuza.

Back at Sookie’s house she takes Alcides Jack and lies in her bed smelling it.

Bill is in the tub having another flashback to when he was human,  He is telling his wife he does not want to fight but he does not see a way out of it.  Bill tells his wife Caroline that she is his first love he has loved her forever.  He promises to come back after the war.

Back to current time Bill gets out of the bathtub, wraps a towel around himself and goes to the mirror.  To his surprise he sees veins starting on his chest and he is infected with Hep-V.