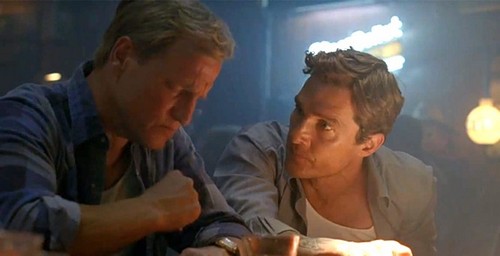 Tonight on HBO their new crime drama TRUE DETECTIVE airs a new episode called, “The Locked Room.  On tonight’s episode Cohle pores over old case files, finding a connection with a woman assumed to have drowned years earlier..  Did you watch last week’s premiere episode?  We did and we recapped it right here for you.

On last week’s episode a hidden image at the burned-out church led Cohle and Hart to Joel Theriot, a tent-revival minister whose parishioners finger a scarred “tall man” seen with Dora Lange. Brought in for interrogation, a sex offender matching the description was quickly dismissed by Cohle, despite offering a confession. Hart got sidetracked after Maggie set Cohle up with a friend at a C&W bar. Looking to establish a pattern of murder, Cohle pored over old case files, finding a connection with a woman assumed to have drowned years earlier.

We will be live blogging True Detectives episode 4 with all the up-to-the-minute details at 9PM EST so make sure to come back to this spot and watch the show with us.   Make sure to refresh often so you get the most current info!  While you wait for the episode you can catch a sneak peek of tonight’s episode BELOW!

After a two-week break, we finally get to see our favorite nail-biting show on HBO! We left off with the last episode giving us a peek at who we believe is Reggie Ledoux, the man the boys have been desperately trying to find. Wearing a gas mask, carrying a machete, wearing only underwear in the middle of the woods, we were left with this creepy episode until tonight, when we hope we’ll learn more about the psychotic animal.

Questioning a Ledoux cohort currently in prison, Cohle and Hart question the tatted-up creep about Reggie Ledoux and their relationship. Because they were in jail together, the incarcerated man started giving up all the dirt on Ledoux once Cohle and Hart get under his skin by telling him Ledoux was responsible for murdering the girl he told him about during their prison time together. Cohle and Hart learn that Ledoux has the same symbol the Cohle had seen on the victims. They also learned Ledoux was heavily involved in the church.

Lisa corners Hart after a he provides testimony in a case she is the assigned court reporter on. Hart blows her off and wishes her luck with her new boyfriend. Back at the station, Hart and Cohle give direction to the team on their assignments. Questioning a dancer that was involved with Tyrone doesn’t get the Hart anywhere except into a strip club. He questions the bartender for what he cannot get out of the dancer.

Hart regrets dismissing Lisa as he gets home to a note from Maggie and learns she knows about Lisa. Hart calls Lisa to find out what he told Maggie and screams obscenities at her. Desperate, he calls her family begging to speak with her. Hart takes a long drive, alcohol in his hand, to an underground club laden with drugs, sex, and the Tyrone he’s been looking for. Tyrone, gun to his head, gives up the little detail he has on Ledoux.

Marty shows up at the hospital to try to talk to Maggie. She breaks down telling him Lisa came over to tell her about the affair while their daughters were there. She is too angry to give him the time of day. Hart is asked to leave after the discussion gets heated. He has to be taken out by security until Cohle comes to get him out. Cohle takes Hart to a bar where they get personal.

As Hart moves his items in to stay with Cohle, he finds out a little more than he may want to know. After a deep discussing, he finds Cohle Injecting a mixture of ink and cayenne, stating that he needs some cocaine. Later, in the evidence room, he makes good on his intention. Later, he meets with Maggie and tries his best to rationalize what Hart did. He ends up walking out the moment Maggie brings up his past marriage.

As Hart hangs in the car, he watches Cohle joins a rough biker crew at a bar as he attempts to locate Ledoux based on the lead from Tyrone. As Cohle gets deeper into the team’s new undercover operation, the bikers he talks to are a little skeptical. Cohle is pretending to be a biker from the past and after they both snort some strong cocaine, they begin to believe him. Cohle, acting as Crash, says he wants to start up a good business deal with them after returning from Mexico. Hart’s radio goes out and he is forced to go in after Cohle to make sure all is well. As Hart tries to make his way in, the tight-knit group of bikers throw him out, but not before he sees Cohle leaving on a boat with a group of bikers. Back in a small room, Cohle is forced to snort line after line so his cover isn’t blown. Cohle sees the bikers have police uniforms and they tell him their plan. Cohle plays into it, giving his advice and going along with everything. A man, bound and gagged screams to be let go. Once they are dressed in police uniforms, the head out with their kidnapped victim. The group, victim in tow, play police and break in to the man’s house, forcing the victim to open a safe.

After Cohle, still playing along, tells the gang not to shoot their hostages, they don’t listen and a full blown gun battle. The cops and helicopters are heard and Cohle is forced to run. Back at the house, those who were the hostages are now set out to kill as leave head out to find the bikers, guns in hand. Cohle takes off with one of the bikers held by gun and calls Hart to meet him. Cohle and Hart leave the crazy scene as Hart pulls up to pick up Cohle and the biker…the one who will get them to the biker’s drug connection, Ledoux.