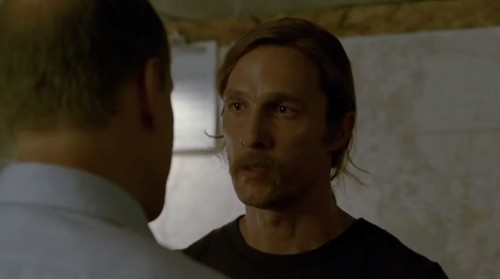 Tonight on HBO their new crime drama TRUE DETECTIVE airs a new episode called,”After You’ve Gone.”  On tonight’s episode Hart and Cohle probe disappearances that tie to the symbology of the Dora Lange murder and the Tuttle family..  Did you watch last week’s episode?  We did and we recapped it right here for you.

On last week’s episode Maggie (Michelle Monaghan) shed light on Cohle’s activities in 2002, when his relationship with Hart fractured and he quit the force.  Their relationship fractured because Cohle slept with Hart’s wife and he was not pleased.

On tonight’s episode  Hart (Woody Harrelson) and Cohle (Matthew McConaughey) forge a truce to probe a murky string of disappearances that tie to the symbology of the Dora Lange murder and the Tuttle family.

We will be live blogging True Detectives episode 6 with all the up-to-the-minute details at 9PM EST so make sure to come back to this spot and watch the show with us.   Make sure to refresh often so you get the most current info!  While you wait for the episode you can catch a sneak peek of tonight’s episode BELOW!

Tonight’s episode opens with Cohle and Hart talking over a beer. Cohle is telling Hart what he’s been doing since they’ve last seen each other. Cohle tells him he has been working on something the past two years that they need to work together to finish. Hart gets upset telling Cohle he has no desire to team up with him or help him after the way he left things. He clues him in to the shadow of doubt that was cast by the detectives about Cohle’s whereabouts and his secret storage shed. Hart tells Cohle that if he was drowning, he’d throw him a barbell. As Hart begins to storm off, Cohle tells him he has a debt. He reminds him about what happened in 1995, and now Hart feels compelled to go see what Cohle has to show him.

Off to the storage facility, the two leave the bar. As Cohle opens his secret storage shed, Hart sees that it is crammed with evidence and research he has been putting together. Cohle starts sharing some of the findings and questions the fact that Tuttle was concerned with the Lange case. Cohle reminds Hart that Tuttle recognized the scene and brought a task force. Cohle is raising a lot of speculation.

Cohle shares a story of when he met with Toby (who now goes by Johnny) and talked to him about Tuttle. Johnny tells Cohle that all he remembers from back then is weird things would happen when he was sleeping. At least he thought he was sleeping because he couldn’t move. He remembers men in animal faces taken pictures of him and doing “other things” but he decided it must have been a dream because of the fact the men had animal faces. Johnny told Cohle of another witness, a girl, but he cannot remember her name. He told him about a man with scars around the bottom of his lip, like he’d been burned.

Cohle tells Hart he needs him because he still has connections in the police department to have access to records. He thinks the Tuttle family needs to be researched even more. Hart is very skeptical. Cohel tells Hart he needs to look at what happened to Billy Lee Tuttle.

Hart visits Maggie and they talk about the kids. He asks her what the detectives asked. Maggie tells him that she didn’t share any information and what they asked about. Hart tells her that Cohle asked him for help and he has decided he is going to help him because he has to.

Back at the storage shed, Cohle shares more of what he has been doing the past few years. He shows him things he’s uncovered including pictures of little girls blindfolded, along with a video. Cohle puts the video on for Hart. The disturbing video shows a little girl being tortured, and men walking towards her, all masked. Cohle had to watch the entire video to see the men after they took off their masks. Cohle assures Hart he didn’t kill Tuttle. He believes Tuttle found out someone stole the video from the safe and thought he’d be blackmailed.

Back to the scene with Maggie and Marty. She questions why he came after not seeing him for 2 years and asks if this is his goodbye. He thanks her without answering her question.

Hart meets up again with Cohle and brings items that will help with their case. Cohle asks about Hart’s personal life and how he’s been. They both share that they are alone , not seeing anyone. Hart said he stayed in the force another 4 years.

Hart asks Bobby for some case files without giving any details as to why. He is given access to the archived case files. Hart reports to Cohle with his findings. There is no file on the girl from the video-it is missing. Ledoux had a cousin, Jimmy, but his record came up clean. Cohle and Hart question a man who knew Ledoux. He tells them about how strange he was. Cohle and Hart ask if they have seen a man with scars. He remembers him. When he was young at camp, a man with scars was there and kept watching him all night. He said it was very creepy, and he never ended up seeing him again.

Cohle and Hart visit Delores, a woman who knew the Tuttles well under the premise they are private investigators who were hired to find out information about the Tuttles and tell the woman’s niece the information may get her some money. She shares that he had kids from all different women. Cohle asks if Tuttle had a son with scars. She says that it was Mr. Sam’s grandchild. His dad did it to him. She stops and says she should not be talking to him about this. Cohle shows her pictures in a book of the branches he keeps finding. She becomes very tense, as if in a trance, and keeps repeating, “Death is not the end.” They are forced to leave because she is too agitated and her niece asks them to go.

The boys are back at the bar and may be on to something. Steve Gerasi, may know something that he may have hidden from them in 1995. Cohle tells Hart to talk to him so he sets up a golf game. Ted Childress is the name Steve gives Hart as the one who spoke with the family about the girl. Hart calls Cohle and tells him he knows Steve is lying to him.

Maggie shows up to the bar where Cohle works and asks how he is doing. Maggie asks what Hart is doing with him as she is concerned he might get hurt.

Later, at Hart’s investigation firm, Cohle and Hart catch up. Cohle asks Marty why he left the force. Hart tells him he quit after seeing a horrifying incident where a woman tried to microwave her baby. He said he couldn’t stand to see anything like that again.

Hart is back with Steve-the two were fishing. Hart starts asking a lot of questions and Steve tells him they should forget about it because he doesn’t remember much about it. Cohle comes from the back and holds a gun to Steve. They force him inside the boat and tell him they need to discuss a few things.

Meanwhile, Papania and Gilbough are driving around trying to find the church Hart and Cohle were at a while back. After feeling lost, they stop when they see a man mowing the lawn. It is someone familiar to us viewers, as we have seen him before. He calmly gives them directions back to the freeway after telling them the church is no longer there. He tells them he is contracted to handle maintenance on lots of places, churches, cemeteries. He assures them he knows the area well. The man no longer has the beard from before and as the guys drive off, we see a close up of the tall man…with a scarred face. “My family has been here a long time,” he says before hopping back on his lawnmower and giving a creepy look that leaves us cringing.