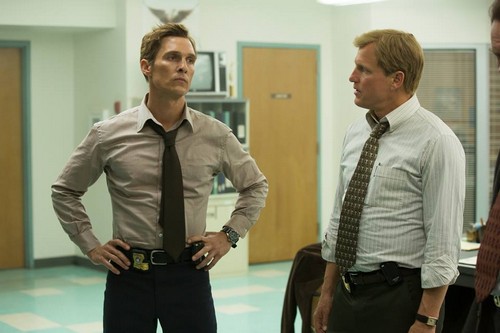 Tonight on HBO their new crime drama TRUE DETECTIVE airs its first episode called, “The Long Bright Dark.”  On tonight’s show  the lives of two detectives, Rust Cohle and Martin Hart, played by Matthew McConaughey and Woody Harrelson, collide and entwine during a 17-year hunt for a serial killer in Louisiana. True Detective, an eight-episode drama series, comes to HBO in 2014.

The show is about Louisiana State Police Detectives Rust Cohle and Martin Hart who are brought in to revisit a homicide case they worked in 1995. As the inquiry unfolds in present day through separate interrogations, the two former detectives narrate the story of their investigation, reopening unhealed wounds, and drawing into question their supposed solving of a bizarre ritualistic murder in 1995. The timelines braid and converge in 2012 as each man is pulled back into a world they believed they’d left behind. In learning about each other and their killer, it becomes clear that darkness lives on both sides of the law.

On tonight’s episode investigators take another look at a 1995 murder when a similar case occurs in 2012 in this drama, which begins with Martin Hart and Rust Cohle, former partners in Louisiana’s Criminal Investigation Division, looking back on the original crime and its effect on their personal and professional lives.

We will be live blogging True Detectives premiere with all the up-to-the-minute details at 9PM EST so make sure to come back to this spot and watch the show with us.   Make sure to refresh often so you get the most current info!  While you wait for the episode you can catch a sneak peek of tonight’s episode BELOW!

RECAP: We see a man in the dark in a grassy plain and burns the field; we now see Martin in an office talking about how Rust. He mentions how when Rust came to his home came over like he was on his way to a firing squad. Rust goes to take a smoke in the room and they tell him he can’t do it anymore; he lights the cigarette any ways and smokes.

We now see a young Rust and Martin together taking a look at where the fire happened in the dark scene before, they find a naked corpse of some girl. Rust walks on over and puts on some gloves; she has moos antlers on her head and is put in a praying position near a tree; there is even a symbol on her back.

Rust mentions the marks on her wrists and knees; she has stabs in the stomach and even some hemorrhaging; Martin takes pictures and Rust goes ahead and takes some notes.

Back to the older Martin and Rust; Martin mentions that any type of person could be a good detective or incompetent; he personally believes he is a regular dude. He feels a smart person who has a steady mind is hard to find; just like Rust was.

Martin mentions seeing where Rust lived, Rust’s house was completely vacant of any furniture; it had the bare minimum of what he needs, a mattress and some books was all he had.

Martin feels that Rust is assuming a lot; Rust tells him to wait and see because he believes the whole murder wasn’t the first of its kind. Martin tells him that he has to come to dinner to his house; his wife wants to meet his partner. Rust tells him alright and walks off; Rust thought about Martin’s family and felt bad because he could do nothing for his daughter’s birthday.

Rust comes over and Martin answers the door; Rust looks very intimidating and scares Martin’s children. Rust and Martin are now in a car; Rust says he is a pessimist and that he is really bad at parties. Martin tells him he isn’t great outside of parties either; Rust says human consciousness is what sets back the humans so much and that they are creatures who think too much for themselves.

Martin says he picked the wrong day to get to know him and now begs him to shut the hell up; he tells Rust that the car should be a place of silent reflection. Rust mentions he does not drink; Martin says that when in his house he has to chill and not talk about his crap he did.

Martin shows a superior the pictures of the murder and mentions how it’s not some prank; his superior offers a conference about the whole thing and that Martin should do the briefing tomorrow.

Rust gets up and leaves the office; Martin says he will take care of the paper work and lets him go. Rust is in his car now; he figured he would work the case when he left the office. He goes to some truck stop and goes inside the bar; he goes over to some women and asks them some questions.

Rust mentions that he talks about a woman and wants to know if any girls they know have gone been missing; he lets them he is a murder police and wants to find out who died. Rust gives one of the girls some money for more drinks at the bar; he sits down with other one named Lucy.

Martin fell asleep in a chair in the living room of his house; his wife comes over and wakes him up with some coffee. Martin mentions that he couldn’t sleep last night and that he’s been stuck on a case; his wife says the kids miss him but Martin gets up saying he has to hurry up and get to work.

Rust brings Martin a file about the girl they found dead, she had marks on her wrists and ankles; there was even sign of rape. She took LSD and meth as well.

Rust and Martin leave the morgue; Rust believes the murder was psychotic and that it was not personal at all. Martin tells him to stop saying crap like that; all his sense about psychos and murderers. The two get in the car; Martin asks Rust if he slept and Rust says he never sleeps just dreams.
Martin gives the briefing on what they know on the case right now; he mentions that she was on drugs and the weird way she was positioned when killed.
Rust and Martin are driving again; they arrive to the scene of a crime. Martin and Rust question the locals, they asks about a girl who has gone missing; they ask a priest about it. Rust walks into the church and the priest mentions that cats have been collected and nailed to doors; Rust asks the priest if the symbols look familiar to him. The priest says that the thing he has drawn are some bird traps; that he learned to see.

Superiors announced that the crime is something that won’t be revealed to the public; that detectives are on the case. Martin and Rust go and talk to some criminal in prison; he says he knew the woman who died and she was hugely into drugs. He mentions how the girls made no sense; she was always high and didn’t have a phone.

Martin mentions how Rust was drunk when coming for dinner and that it’s weird that he would do that; Rust says that he drank because he was checking out a lead and drank too much at the bar. Martin’s wife says it is nice to meet Rust, one of the kids asks if Rust fired his gun before. Rust said he has; Rust mentions it’s not good to shoot people.

Martin gets up from the table to leave; Martin’s wife asks Rust about his marriage and says he used to be but not anymore. She asks about children and Rust says that his daughter died and that is what made the marriage fail; Martin tells Rust that someone is on the phone for him.

We now see Rust slaps a person in the face for talking crap about him in the office; the man gets pissed off and leaves. A Reverend comes in and says that a lot of people are quite afraid of their case; thinking it’s some satanic cult. The reverend thanks them; Rust says it’s a load of crap and doesn’t like this guy.
Martin and Rust go meet a man who used to be a good pitcher in pro baseball but he now has a bad disability; they ask about their niece who is dead. Rust asks about the girls birth father, they heard about her running off with him and wondering what happened. Rust asks if they know where the birth father is or where their niece Debby is at. They say they don’t know and that Debby is in Vegas last they heard; Rust leaves the house. Rust goes looking around outside; he looks into a shed and notices something. Martin goes walking over when Rust calls; Martin looks in and finds the bird traps they found at the crime scene inside. They take it as evidence; though the family denies ever seeing it.