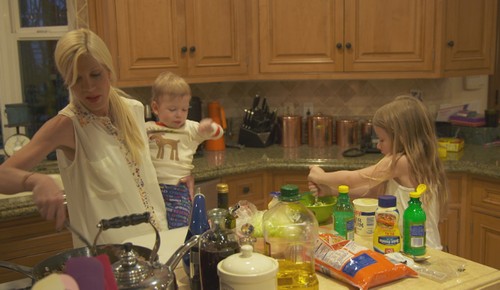 True Tori premieres on Lifetime tonight, on tonight’s first episode called “The Fairytale Falls Apart” the marriage of Tori Spelling and Dean McDermott is chronicled, as tabloids speculate about the couple’s future.

Growing up as part of Hollywood royalty, Tori has always lived her life in the public eye.  The world watched as Tori and Dean fell in love and became parents to four beautiful children.  But Tori’s fairytale life came crashing down when reports of Dean’s infidelity hit the tabloids last December, throwing their marriage and family into crisis.

On tonight’s episode in a unique television event, Tori Spelling has made the courageous decision to allow the audience to witness the most difficult and unpredictable period in her life. Intimate, raw, emotional and completely real, Tori will tell her story for the first time as it should be told—by her. Since viewers will be seeing events almost immediately after they occur, nobody knows how the drama will unfold—not Tori, not Dean—and only time will tell if Tori and Dean’s marriage survives.

We hope you stop by for this cool new show! We loved Tori & Dean: In Love and are really excited to see how this show further explores their relationship. Make sure to come back here later tonight at 10 PM EST for your LIVE recap. In the meantime hit up our comments section and tell us your thoughts on the about this new show!

Tori Spelling is finally ready to talk and boy has there been tons of questions since last December. The actress/ author sat down for her first interview as recently as April 1st . Like it was promised the taping of her new reality show will be occurring in near real time.

Growing up as Aaron Spelling’s daughter, Tori has always had to deal with people’s misconceptions. She’s had to deal with these fake stories about herself and people connected to her all her life, but then the magazines got it right the last time. That story they ran with was about her husband’s affair with a young woman in Toronto.

It was her publicist that first told her about the story. Tori was called one day and she immediately dismissed the story as yet another rumor. At the time she even joked with Dean about it. Then her publicist called again because the story became more than merely a rumor. The mistress had put her face and her name to the article so that’s when Tori started to question her husband’s fidelity.

It was during their children’s holiday performance that she got the call so she calmly asked Dean to step outside for a minute. At first he was playing it off as a rumor, but Tori saw his tell – his eyebrows was shaking. So she mentioned the girl’s name and that’s what made Dean confess to his affair.

It didn’t all come out at one time though. Dean had to drag it out with more lies like saying the girl was in his hotel room although nothing happened. It was only after he was pushed that told the whole story.

Then Dean checked into rehab leaving his wife and four children behind. The rehab was supposed to help him get better, but he still left his family to primarily fend for themselves. Once it was revealed that he was staying away from home then that’s when the paparazzi started harassing Tori. So Tori was at home raising three kids with the media outlets all watching to see what happened next.

The kids weren’t used to paparazzi before and then all of suddenly it became part of their daily routine. Tori says the younger ones have adjusted, but her older two and especially Liam are finding it tough.

But Tori does have people to lean on. One of her best friends since they were kids has come out to help her. He put his life on hold to do so and thankfully he’s able to inject some much needed common sense.

Prior to his arrival, Tori was looking at Dean’s affair as if it was her fault. She wanted to know what she did wrong in the marriage. And her friend told her she was wrong. The only person that is responsible or how her marriage is now is Dean!

Tori was with her other friends Kate and Jess when she got a text from Dean. He said he couldn’t look at someone right now. Yet Tori doesn’t know who the hell he’s talking about. Was the text even meant for her as in did he send it to Tori by mistake.

Tori didn’t know what to do and her friends were riling her up. They wanted her to be done with Dean and so they began to speculate on who Dean was talking about. Tori managed to calm down, but did she have the same question. Who is this mystery woman her husband can’t face?

Dean eventually got back to her. He said that he was texting with someone else and that the encounter he was mentioning was completely innocent. It was just someone at the rehab.

Though he appears to have forgotten that Tori has already heard a similar story before so she was on high alert before the clarification and despite Dean trying to talk her down – she still doesn’t trust him.

Tori and Dean have not discussed the affair or their relationship since Dean’s been in treatment. And so when Tori got to see Dean with his therapist – it was eye-opening for the both of them. Dean has demons that Tori never knew about. He was facing addiction and depression. Plus on top of that he admitted to mostly lying his whole life to get out of trouble.

Dean also has an alter ego. His name is Deano and he was the one that had to be tough and the man’s man. And it was only hearing him admit to his alter ego that Tori also confessed that she saw signs of it early on in their relationship. She would be with Dean and everything was fine then it was like dealing with a completely different person. During those times, Tori has even stated she felt bamboozled. Yet she married anyways.

Dean says it’s because Tori never actually gets confrontational. While she’s finally talking to him about the affair – he noted that her voice got quieter as she spoke. And Tori said she didn’t want to cause an issue.

That’s how marriage their worked. Tori would try to change Dean for the better and it would never work. So she got disappointed, but never told him how much his actions were hurting her. It’s only now she’s telling him.

Dean wanted to know if he could come home and Tori said no. She knows that if he did then they were going to sweep all their marital problems under the rug. And that won’t accomplish anything. She’d expect him to change and he wouldn’t.

It’s what Tori is used to, but she wants something different.

Later as she’s going over the conversation with friends, Tori says she feel like she can’t be mad at Dean. He had a rough upbringing and she understands that he’s self-sabotaging. Jess on the other hand says that’s not an excuse. Dean hurt his wife and he can’t blame it all on childhood issues.

Jess is firmly in the camp that Tori should walk away. She sees how much Tori wants to forgive Dean and she feels like the cheater doesn’t deserve it. But she’s not the one making decisions – Tori is. And she’s not ready to sign off on her family.