BY Amanda Austin on May 29, 2014 | Comments: one comment
Related : Recap, Television 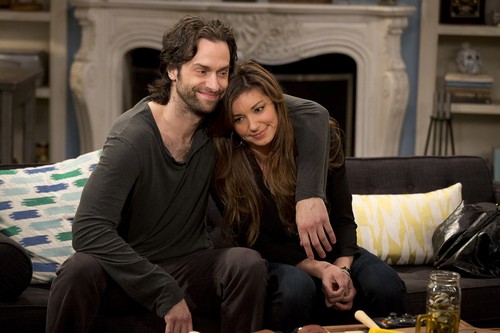 On the last episode when confident slacker Danny Burton (Chris D’Elia) took Justin (Brent Morin) on as a roommate, Danny unwittingly inherited Justin’s group of romantically challenged friends. Seeing himself as the ultimate player, Danny decided to teach them everything he knows about “the game of love”.  Did you watch the pilot episode?  If you missed it we have a full and detailed recap, right here for you.

Tonight’s second episode is going to be great and you won’t want to miss it. So be sure to tune in for our live coverage of NBC’s Undateable tonight at 9:30PM EST! While you wait for our recap, hit the comments and let us know what your thoughts on Undateable so far?

Tonight’s episode of Undateable begins in the bar Black Eyes, Dan and Justin are making plans for their 1 week anniversary of living together. Danny says he can’t he has a date, and then proceeds to explain to Justin what a date is, since he never has any. Danny offers to help him with Nicki, after Dan awkwardly bumps into her and then proceeds to do the Harlem Shake.

The next morning Danny runs into Justin in the kitchen where he is singing Backstreet Boys. Brett, Burske, and Shelly arrive and they reveal to Danny that every Saturday they have a “Brew And Stew.” Danny tries to sneak the girl out of his bedroom, but Justin embarrasses her and says she is doing the “Walk Of Shame,” and then he invites her to stay for breakfast. Danny is furious.

Later Dan heads to the bar and demands that Brett, Shelly, and Burske hand over the keys to his apartment. Then he sits down with Justin and tries to explain to him the meaning of “personal boundaries.”

A “hot chick” moves in to Burske’s apartment building and Danny tries to give him some advice on how to talk to her, or not talk to her. Danny thinks his best bet to win over his new hot neighbor is to not talk to her. The Little Mermaid got the Prince to fall in love with her without talking. Burske says he is going to “Little Mermaid that chick so hard” and runs out of the bar.

Meanwhile Justin is embarrassing himself and runs out of his office and bumps in to Nicki on purpose to that they can do a “which way dance.” Danny follows him back in to his office and takes his cell phone and texts Nicki and invites her out to the movies with Justin so that he will stop making a fool of himself.

Justin rushes out and explains to Nicki that the text was actually meant for his blind, alcoholic friend Nick. His friends are baffled as to why he invited a blind guy to the movies. And, how the blind guy can read text messages.

At his apartment Burske runs in to the hot girl in the elevator. He carries her grocery bags for her, but never says a word. She thinks he is slow though because whenever she says something to him he just shakes his head “no.” He runs back to Danny and tells him that he “Little Mermaided that chick so hard that he got a date.”

Meanwhile Justin is on the phone with a nursing home trying to rent out an old blind guy. Danny makes fun of him and Justin yells that he isn’t a loser like Burske and Shelly, and he doesn’t need Danny’s help. Burske and Shelly overhear Danny and their feelings are obviously hurt.

Justin feels like crap that he just called his friends losers, they always have each other’s backs. He tries to talk to Danny about why he is so weird about Nicki, but Danny clearly doesn’t want to have a heart-to-heart. Danny breaks down and says he can never be the friend that Justin needs him to be because he has a penis.

Justin heads to the bar and apologizes to Shelly, Burske, and Brett for calling them losers. They accept his apology, and Leslie overhears what happened and storms back to the apartment and yells at Danny for treating them so badly. She tells him he needs to “outgrow this,” and stop floating through life without making any real connections.

Danny heads to the bar and catches Justin practicing asking Nicki out. He tells Justin that he is going to “start opening up” and offers to grab a booth with him and start talking about their feelings. Nicki comes out of the office and says that she is going to the movies and asks Justin to come with her. Danny offers to watch the bar for him so that he can go to the movies with Nicki. Justin hugs him and thanks him and runs out the door.