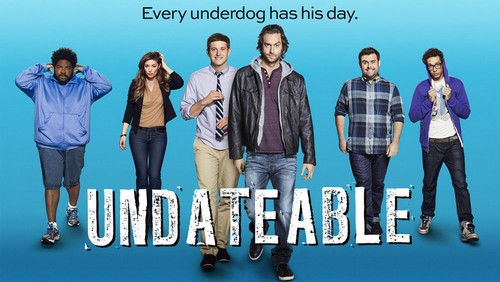 Tonight Undateable premieres on NBC with it’s first episode called, “Pilot”. This new underdog comedy is from executive producer Bill Lawrence (“Scrubs” and “Cougar Town”). In tonight’s episode, two new roommates move in together in this season opener, in which a confident man tries to instill dating skills in a group of romantically challenged friends.

Undateable is a multi-camera comedy that was created by Adam Sztykiel and is based on the book Undateable: 311 Things Guys Do That Guarantee They Won’t Be Dating Or Having Sex by Ellen Rakieten and Anne Coyle

On tonight’s episode when confident slacker Danny Burton (Chris D’Elia) takes Justin (Brent Morin) on as a roommate, Danny unwittingly inherits Justin’s group of romantically challenged friends. Seeing himself as the ultimate player, Danny decides to teach them everything he knows about “the game of love”.

Tonight’s premiere looks like it is going to be great and you won’t want to miss it. So be sure to tune in for our live coverage of NBC’s Undateable tonight at 9PM EST! While you wait for our recap, hit the comments and let us know what your thoughts about this new show?

The pilot episode of Undateable kicks off in a bar called Black Eyes, which is owned by Justin. Danny begins flirting with the bartender Nicki, which doesn’t float well with Justin. Afterwards they head to Dan’s house (aka the “Dan Cave”) and Justin informs Dan that he and Nikki are “kinda a thing,” as in someday he is going to get up the nerve to ask her out. Dan decides he is going to take Justin under his wing and be his “papa bird,” and teach him how to get girls. He declares Justin has just been accepted to “Danny Burton University.”

They head back to Black Eyes. Justin sneaks up behind Nicki and tries to give her a massage, she jumps and yells at him and tells him to “be careful because she almost bitch-slapped him.” Somehow he begins rambling about her Dad, who Nicki never met. Dan declares that the situation is much worse than he realized, and he is going to take Justin “out.”

Dan takes Justin and their Black Eyes gang out to a party. Burske jumps right in to the dating scene and hits on a woman and asks her when her baby is do, unfortunately she’s not pregnant. Brett just came out of the closet, but when he is approached by a cute guy he begins rambling about fallopian tubes.

The next day Burske, Shelly, Brett, Nicki, and Dan all gather at the Black Eyes to hear the details of Justin getting lucky. While Justin is describing his hook-up, he mentions that the girl used the phrase “hurd of turtles.” Justin begins yelling, “No!” He pulls out his phone and shows Justin a picture, he confirms that was the girl he hooked up with last night. Apparently he slept with Dan’s sister Leslie.

Leslie barges in to Dan’s apartment and asks him what the emergency is. Dan yells, “You slept with my roommate!” Leslie confesses that she knew he lived with Justin, but she didn’t want her good bra to go to waste. Dan says he understands, and he “hopes he taught Justin enough to please her.” Leslie breaks down in tears and confesses that Justin wouldn’t even sleep with her because she seemed too sad and they just spent the night lying next to each other like “two paralyzed people.”

After a pep-talk from Burske, Justin heads back to the apartment to apologize to Dan. He hands his keys over to Dan and tries to leave. Dan confesses that he isn’t good about being alone, and all of his friends have moved on with their lives. Justin feels guilty and tells Dan to come back to Black Eyes. Dan is moved and cries, and they head back to the bar together.