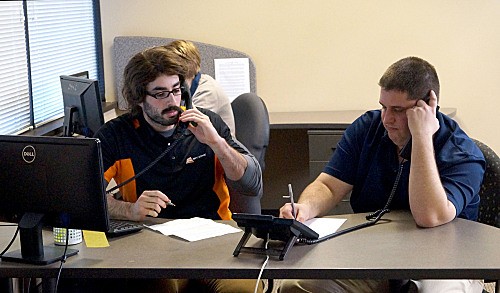 A whole new episode of the two-time Emmy Award-nominated reality series UNDERCOVER BOSS returns for another new episode tonight called “Sky Zone.”  On tonight’s episode Sky Zone CEO Jeff Platt works undercover at his indoor trampoline park. He referees a children’s dodgeball game and has trouble hiding his in-depth knowledge of the company while working in community relations.  Stay tuned as we live blog the episode with all the up-to-the-minute details.

On last episode for the first time on UNDERCOVER BOSS, three previously featured bosses – Amit Kleinberger, CEO of Menchie’s; Randy Dewitt, Co-Founder and CEO of Twin Peaks; and Steve Greenbaum, CEO and Co-Founder of PostNet – send an employee undercover for a second look inside their companies.

On tonight’s episode  Jeff Platt, CEO of Sky Zone, the world’s first indoor trampoline park, jumps into action as a referee for a children’s dodgeball game. On another assignment, the 29-year-old boss – the youngest in the show’s history – has trouble hiding his in-depth knowledge of the company when working in community relations.

On tonight’s episode of Undercover Boss, Jeff Platt the CEO of Sky Zone and the youngest boss ever featured on the show suddenly finds himself forced to deal with his inner child. The 29 year old works at the company he and his father founded back in 2002. They started Sky Zone as a fun way to get fit but during the early planning stages Jeff’s mother was diagnosed with cancer. Unfortunately Mrs. Platt was unable to successfully fight off the disease and she passed away in 2009.

At the time this episode was recorded it was the fourth year anniversary of his mother’s death. Since her passing Jeff has taken over most of the running of the company and Sky Zone as it is now, it’s currently expanding into worldwide brand. That’s why Jeff wants to monitor the company’s progress. Before they go ahead with the expansion though he wants to make sure there aren’t any faults in his brand. With 52 million dollar revenue depending on the company’s good name, then there better not be any faults to find.

On Day One of his assignment, Jeff goes in posing to be on a reality show (to explain away the cameras following him around). His first supervisor is a friendly young man named Cam. The two men started off refereeing the kids playing around. And before long they were tired out by the kids but still had hours on their shift.

Cam told him about how people think this job is all fun and games when in actuality really it’s pretty hard to be on your feet for 8 hours at a time. And it’s harder on Cam because of his condition. He used to play a junior league hockey but had to quit after an accident.

Since the accident Cam has had multiple surgeries on his hip and his dad’s has been helping him keep up to date with the payments. Yet at the very first opportunity he could he chose to leave the house and go back to work. As he told Jeff, he just didn’t see himself staying inside and sinking into a depression. Not while he can still walk seeing as his doctors weren’t even sure that could be option for him.

For Day Two of the assignment, Je had to work with the suppliers. He met Keith and Keith was kinder to him that he deserved. Jeff was given the simple task of tying knots to keep the trampoline in place. Yet he kept failing to tie a strong enough knot. All Keith had to do to unravel them was just to play around with the strings and then whoosh – all of Jeff’s handiwork is gone.

Normally a boss would have lost his cool by then but Keith kept his composure. Later Jeff asked him about his cool headedness and Keith explains how it didn’t come easy to him. He went wild during his younger days and was in prisoned from the time he was 19 till is early twenties. Then on top of though he recently lost a child last year. His daughter was born stillborn and it was hard to keep going.

He eventually did but the pain from that loss is still with him.

Meanwhile Jeff might have made a mistake in picking his third position. He chose to work at the customer service area with Miles. But he’s met Miles a couple of times before so at first he did everything he could to try and throw him off. And then he forget to keep up the persona. As in Jeff came pretending to be a trainee yet he knew more than what Miles taught him.

That made Miles suspicious enough that he started questioning who Jeff really was. So Miles began to closely watch him until Jeff accidently revealed himself ( he knew the company’s motto without being told). With the truth out on the table Jeff asked to speak to Miles alone. Jeff came right out and asked him what did he think needed to be changed with the company and he was surprised to learn his behavior was the first thing Miles could think of.

When they first met, Jeff was a little rude to Miles. He asked him to mop but not in a way that was comfortable with Miles. When funnily enough these two men have so much in common. Miles sees himself as one day buying into the franchise and he knows what’s it’s like to lose a parent. Although Miles has faced other and tougher challenges. Like he was a drug addict and if he hadn’t met his current boss then he would still be at a halfway house.

So you see, Jeff didn’t know all of that and that could be why he misjudged Miles in the beginning.

The last job Jeff had to do was maintenance. He met with Breckin a transgender young man who dreams of turning maintenance into a career for himself. Breckin was born a girl but coming out as man made his early years hard. The one thing that got him through it was his mom. He was able to sympathize with Jeff because he honestly couldn’t imagine life with a mother.

This whole working experience has opened Jeff’s eyes to what’s going on with his employees. Before there was just 2,000 number and now he can connect these people to life stories. So when all of his supervisors were brought in for the “reality show”, he came clean with all of them and then told them each how they inspired him.

Miles with his ambition received enough money to start up is own franchise.

Keith with his strength was given enough money to take some time off of work. He needed to focus on his family.

Breckin with dream was given money to complete his surgeries.

Whiles Cam not only received money for physical therapy but his own personal brand of good cheer will be used worldwide in commercials for Sky Zone.