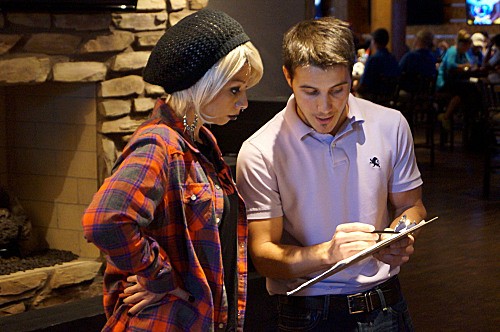 On last episode Utah Jazz CEO Greg Miller became CEO not only of the Jazz but the head of the Miller family’s massive business conglomerate after his Dad passed away five-years ago.  Greg attempts to make halftime history when he works undercover with their infamous Dunk Team. Also, the boss’ team spirit is put to the test when he is asked to become a human basketball hoop as a member of the Interactive Team.  Did you watch the episode?  We did and we recapped it right here for you.

On tonight’s episode for the first time on UNDERCOVER BOSS, three previously featured bosses – Amit Kleinberger, CEO of Menchie’s; Randy Dewitt, Co-Founder and CEO of Twin Peaks; and Steve Greenbaum, CEO and Co-Founder of PostNet – send an employee undercover for a second look inside their companies.

On tonight’s episode of Undercover Boss, a few of the most memorable bosses have decided to take another once over at their companies and their companies’ performances. Although to do so they can’t exactly go back undercover. The employees have caught on to that ploy so this time the bosses are sending in employees in the first ever edition of Undercover Employees!

Amit Kleinberger, the CEO of Menchie’s wants to take another inside look seeing as after the last time he had to fire an employee. This time he brought back the effervescent Jenny. He had met her though his first run on Undercover Boss and she had impressed him. That’s why he paid her way to go to college. Now that she’s in with college; Jenny is seriously considering going into marketing and Amit has promised to find her something.

But he also wanted her to a favor for him. He wanted to send Jenny into his busiest store dressed as a shy and reserved young geek a –complete antithesis of her real personality. However she was able to pull it off and then some. She played her part so well that the manager of the store – Cristina – the poor manager thought she would have to work extra hard time getting a new staffer prepared.

Not that Cristina let Jenny’s ineptness ruined her professional cheer. She kept her smile on and her voice at regular level. Which would have been hard for anyone else if they had to deal with the way Jenny was acting. All in all if there was main concern about the store then it would have to be the equipment that needed some serious updating but that Cristina still found a way to do without.

That’s why at the end Amit was so very proud of his staff. He gave Cristina a college fund for both her and her toddler on top of giving her family a vacation. Amit did no less for Jenny. He’s willing to pay for several trips back home so that she can see her family more regularly while she’s attending school. Why? Because Amit believes in treating great staff well in hopes of only keeping the great staff.

While the Co-Founder and CEO of Twin Peaks, Randy Dewitt, brought back Marissa to help him. Marissa it seems was on the show during Randy’s earlier stint but didn’t quite make a good impression. But she’s given a chance now to redeem herself. Randy had heard from the managers that Marissa’s behavior had changed since she was featured on the show and bringing her back will allow Randy to see how much she’s improved.

Marissa had to go from flaunting her body to be fully clothed punk rocker named Ramona. This was even harder to do after she noticed the cute assistant manager named Jeremy that was supposed to be overseeing her performance. Marissa’s natural behavior was coming through so much that Randy had to warn her about it.

Though she did help pick up on things that needed to be fixed. The ladies at the bar were supposed to help clean up but they don’t. Randy is willing to overlook that because it is a new policy and the General Manage should have been the one to tell them what to do – so it’s not Jeremy’s fault.

Jeremy is a good assistant manager and Randy tells him so once their little ruse is over. Randy assured Jeremy that there’s room for him to climb the corporate ladder and in the meantime he’ll pay for Jeremy to vacation wherever he wants to with his girlfriend.

There’s a bright future awaiting and Jeremy and even Marissa wasn’t forgotten. Marissa had mentioned her father. She’s been waiting for him to retire and enjoy old age but they never had the means to. Well, Randy overheard her and decided to give her an extra 5 grand towards her dad’s retirement fund.

As for Steve Greenbaum, the CEO and Co-Founder of PostNet, his plan for undercover employee fell through because of who he chose to go in. he used a very well-known face from his past to pretend to be a slacker and it wasn’t long before “Jeremy” was caught out.

His boss saw through his ruse and he quickly came up with a story to throw her off the Undercover Boss stench. He told her how he wanted to open up his own store and wanted to learn the ins and outs. In doing so he found out more about his boss and Amanda opened up about losing her husband recently. She and her husband had dreamed about opening a second store but couldn’t afford to do so.

Steve chose to give her that dream. He gave Amanda 50 grand to open a store just like she and her husband wanted. And he gave his old friend, Belton, a trip with spending money. Because that’s what you do for friends even if they made a couple of mistakes.