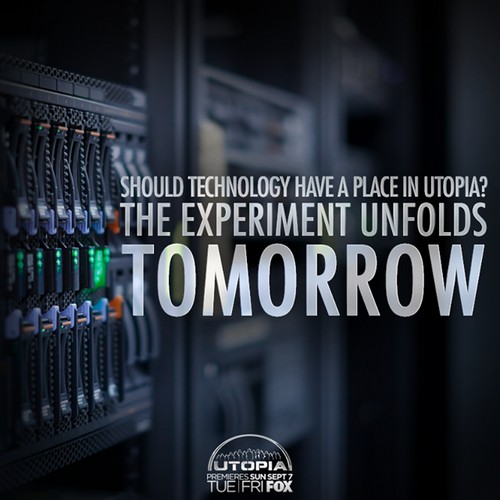 Tonight on FOX, Utopia premieres with a two hour special. On tonight’s episode Part 1 of the three-part premiere of a one-year social experiment involving 15 people who try to create their own civilization from scratch by deciding on a system of government, what food they’ll eat and how they’ll interact with the outside world.

For those of you who don’t know about the show, get ready to witness the birth of a brave new world. On the daring unscripted series UTOPIA, 15 pioneering Americans wave goodbye – for an entire year – to the lives they’ve known, move to a remote location and set out to create a society from scratch. They’ve got limited supplies, wildly diverse backgrounds and zero bathrooms.

On tonight’s show, from unscripted mastermind John de Mol, and based on the hit Dutch television series of the same name, UTOPIA asks the question: “If you could restart the world, what would you do differently?” This unprecedented social experiment follows 15 pioneering Americans who choose to leave their everyday lives and move to a remote location, where they come face to face with the ultimate adventure: creating their own civilization from scratch. This is not a game. There is no prize.

The premiere episode of Utopia airs tonight at 8PM and you don’t want to miss it. Celeb Dirty Laundry will be live blogging the show, so don’t forget to come back to this spot at 8PM EST for our live recap!

RECAP: Tonight’s series premiere of Utopia kicks off with host Dan Piraro giving a tour of Utopia, where the pioneers will be living with no laws and no church, and no money or power. Utopia isn’t a game, the only prize is something invaluable, being a part of the biggest social experience ever televised.

Hex, a Midwestern huntress is the first to arrive in Utopia. Tennessee native and 44 year old pastor Jonathan is the next pioneer to arrive, followed by Bella, Rob, and Dedeker. Josh, a general contractor from New York City arrives shortly afterwards. All fourteen of the pioneers assemble in the barn to learn what is in store for them. A hologram forms on the table and reveals that they have $5,000 in the safe and they have to use it wisely. They all brought their own possessions, but they have to pool their items together in one crate and only take what they need. The automatically begin bickering over who’s stuff is coming and who’s is staying. Ex-convict Dave begins freaking out because he doesn’t want to leave his stuff behind, after ranting and screaming the other pioneers cave and let him put all of his stuff in the crate. During the commotion, Aaron realizes that Amanda is pregnant, but she begs him not to tell anyone.

Josh and Red, handymen and contractor find a power box in Utopia, but none of the power has been ran into the buildings, they will have to connect it themselves. Josh and Bella get in a fight over the sewage and toilets, she wants to use their human wastes to fertilize the garden, but Josh refuses to eat “vegetables with pooh on them.”

As evening approaches on night one, Aaron a professional chef has taken over managing their food supply. They all gather around for dinner, and Red says grace. Josh refuses to say grace and eats while everyone else is praying, Josh tells Pastor Jonathan that “Jesus isn’t going to bring him a hamburger.” Chef Aaron announces during dinner that because of food supply they will only be able to eat twice a day, Amanda says eating is a deal-breaker, and she refuses to only eat twice a day. Nikki manages to calm everyone down with a Yoga routine, and Dave makes an announcement and apologizes for his outburst earlier.

After dinner the pioneers decide to have a party at the lake and go skinny-dipping while they get drunk. While Josh is flashing everyone at the lake, Red and Pastor Jonathan hang behind at the house and discuss how annoying Josh is. Josh is a drunk mess and orders Amanda to make his bed for him, but she refuses. After trying to put him to bed, Josh stumbles back to the party. Josh grabs Amanda and tries to kiss her and she freaks out on him and says she will “rip his throat out.” Josh continues harassing everyone, and convict Dave finally snaps and jumps on him and starts choking him. The pioneers all run to break up the fight.

[9:59:32 PM] Amanda Austin: The fight is broken up, and Josh heads to the barn to sleep it off. After the brawl, Dave gets in to a heated argument with Pastor Jonathan over the Bible and whether or not Mary was really a virgin. Meanwhile, sparks are flying out in the field as Bree and Chris are hooking up in their sleeping bags under the stars.
The next morning the pioneers wake up and try to discuss what action they should take towards Josh. Bella decides to start gardening, but her helper Hex is too hung over to function. After vomiting all over the place and passing out, production decides to step in and call an ambulance for her. Meanwhile New Jersey native Rob is trying to figure out how to milk the cows.
Drunken Josh stumbles out of the barn the next morning, New York attorney Mike calls a meeting and says that they should wait until Hex returns to decide his fate. Everyone gives Josh the cold shoulder so he decides to get to work and help everyone out with their projects to prove himself. He even makes amends with Dave, who says he forgives Josh for his outburst.
Hex returns from the hospital, and the pioneers decide to hold a trial for Josh. Mike says that a few witnesses should testify about what they seen Josh do, and then Josh should speak on his own behalf and then they will vote whether or not they should kick him out of Utopia. Before they can even begin their mock trial Rob and Bella get in to a screaming match and he storms out. Aaron leaves as well and says that Josh has his vote but he doesn’t want to partake in the trial. The remaining pioneers vote 7-6 that Josh stays, but they set probation for him and he can’t drink while in Utopia and if physically or sexually threatens anyone else they are going to call 911. Josh agrees to the stipulations, and he is staying. Bella is distraught that they are letting Josh stay, and heads outside to cry.
After the trial Amanda makes an announcement and tells everyone that she is pregnant and plans to have the baby in Utopia, the pioneers are all thrilled that there will be another addition to their new world. Back in the house Josh, Bella, and Mike are planning the garden and discussing building a “chicken tractor.”
Later that night Pastor Jonathan and Hex get in to a heated disagreement over all of the nudity in Utopia, he confesses that he feels uncomfortable when they go skinny dipping. He admits that he has doubts about staying in Utopia, and he didn’t realize what he was getting himself in to.

It’s Day 3 of Utopia and it’s also Dave’s birthday. Nikki spends the morning discussing religion with Pastor Jonathan. Bella heads to the chicken coop and realizes one of the chickens are dead. Hex takes the dead chicken to Aaron and tells him to cook it up for them to eat but Aaron refuses because they have no idea why the chicken died, for all they know it could have a disease. Red freaks out because he wants to eat the chicken and Aaron won’t let him. He heads to the hose to get a drink of water and throws a temper tantrum and runs their water supply all over the ground.

Aaron, Dave, and Chris decide to dig a trench for their electric wiring. While they are working Aaron and Dave argue over their form of government, they think that need to formerly announce that they have a democracy. Later, Red and Bella get in to a screaming match over the water incident earlier. Red screams at Bella and calls her a “dumb bitch” and Aaron intervenes. Aaron snaps at Red and tells him that he is going to respect him and threatens him that he will “put him in the dirt” if he doesn’t respect him. Red storms off and vents to Dave about the water some more. All the women head out to the field for a yoga session with Nikki.

Later that night Red announces that he has had enough and he is going home, Pastor Jonathan follows him to the gate and tries to convince him to stay. Jonathan is able to convince Red to give it another night, he heads back to Utopia and has a drink with Dave, Dave thinks that Red should sit down with Aaron and resolve the conflict. In the barn Bella and Josh are bonding and she gushes that she loves his personality and then notices that his fly is down. He jokes that now she is sexually harassing him.

Red gives Dave an ultimatum and says that if he doesn’t vote Aaron out for threatening his life, then he is going to leave. Dave convinces him to sleep on it and wait until the morning before he leaves. Red sits down with Aaron afterwards and Aaron apologizes for their altercation, they hug it out and agree that they need to set some ground rules for Utopia. All of the pioneers sit down that night and finally make some progress and set some laws for their new society.