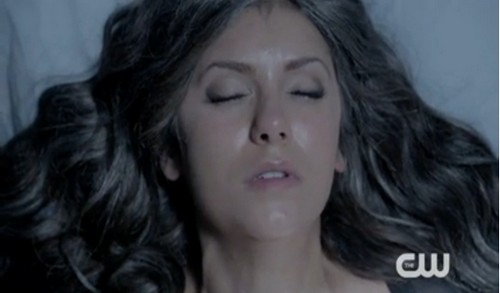 We are counting down the hours until the Season 5B premiere of The Vampire Diaries. But, it’s not just any season premiere, it is also the popular series’ monumental 100th episode. And, Julie Plec and her team of writers have promised to celebrate the anniversary with an unforgettable hour of drama. Here’s what Vampire Diaries fans can expect to see in Season 5 Episode 11 “500 Years of Solitude.”

The vampire we all love to hate has been battling some health problems since she was force-fed the cure and turned back into a human. Katherine has been aging rapidly, and her 500 years of life are catching up to her…fast. In Episode 10 Katherine passed out in the Salvatore house, in “500 Years of Solitude” Katherine will be on her death bed at the hospital, and slowly slipping away. Stefan will hold vigil at the hospital, while the rest of the Mystic Falls gang reminisces about all of the not-so-good memories they have shared with Katherine. No one knows for sure if Katherine will actually die in Episode 11, or if at the last minute the Mystic Falls gang will manage to conjure up a scheme to keep her alive (like they do every other character).

The Original Vampire family has always been a huge part of Vampire Diaries, up until Season 5 when Klaus and his siblings headed to New Orleans for their very own spin-off show. The writers and producers promised to pull out all of the stops for the 100th episode, so Klaus will be paying his old frienemies in Mystic Falls a visit. Rumor has it he will be bringing someone with him to Mystic Falls.

Caroline and Klaus were never technically a couple, but a huge portion of Vampire Diaries fans think they should be. Which is why the writers have managed to sneak in a Klaroline scene just for the fans. You can call it a little 100th episode anniversary gift to the fans for being loyal viewers the last five seasons.

According to TV Guide there will be an emotional scene shared between Katherine and her Doppelganger Elena. A lot of rumors are swirling around the Vampire Diaries community that Katherine will use a “Traveler Spell” to put her spirit inside of Elena’s body before her body dies. No one has confirmed this theory though.

We just learned in Vampire Diaries Season 5A that Nadia is actually the daughter of Katherine, who was taken away from her moments after she gave birth to her. In “500 Years of Solitude” there will be a flashback to the year of 1490, when Nadia was born. Vampire Diaries fans will get a little more insight on Nadia and Katherine’s history.

In Season 5 Episode 10 Caroline caught Stefan and Katherine hooking up. Well, in “500 Years Of Solitude” she will spill the beans to Elena and fill her in on their hook-up. Who knows exactly how the news will effect Elena. She may not care at all. Or, she may refuse to help Katherine because she is jealous that she hooked up with Stefan. Then again, she may help Katherine because she hooked up with Stefan and doesn’t want Stefan to lose her.

Remember Aunt Jenna? She was Jeremy and Elena’s only living relative until Klaus sacrificed her in the Season 2 finale so that he could become a hybrid. According to a spoiler released months ago by E! Online, Jenna will appear in “500 years Of Solitude.” We aren’t sure whether her appearance will be in the form of a flashback. If for some reason they drop the veil to the “other side” and Jenna does return to Mystic Falls, she will be able to catch up with Klaus (seeing as how he is visiting Mystic Falls during the 100th episode as well).

When news spreads of Katherine’s impending demise, the Mystic Falls gang decides to throw a party. She has made their lives a living hell since she returned to Mystic Falls, so it only makes sense. While Katherine lays upstairs in dying, everyone except for Nadia and Stefan sits downstairs toasting to her dying.

Tyler Lockwood returns to Mystic Falls, the last time we seen him on The Vampire Diaries was when he visited Caroline at college to sleep with her and break up with her before he headed to New Orleans. It will be interesting to see how his return effects the Klaroline moment we have all been promised.

Bonnie and Jeremy will appear in “500 Years of Solitude” and Caroline will find out that they have slept together. Her feelings will be a little bit hurt that Bonnie never told her. This will be the first time we have seen Bonnie and Jeremy since their appearance in Season 5A, “Dead Man On Campus.”