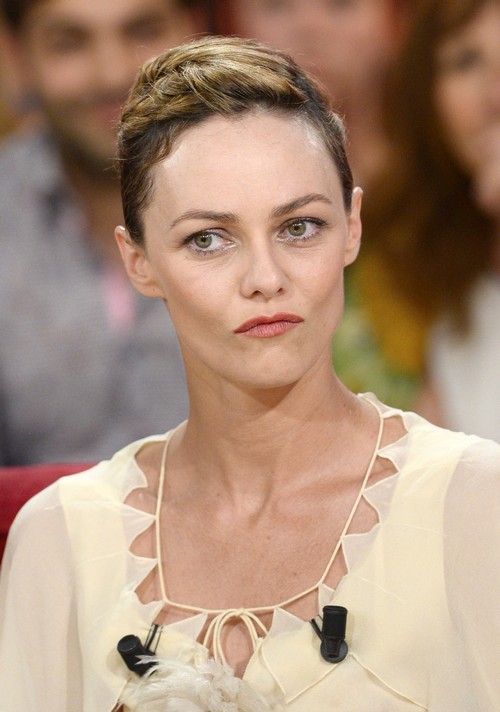 Vanessa Paradis is disgusted and enraged by nude photo phone hacking evidence that Amber Heard is a homewrecking careerwhore who ruined her children’s lives and destroyed her relationship with Johnny Depp.  Amber Heard was one of the celebrities whose hacked nude photos were displayed this weekend in the lastest rash of celeb exposure, but what’s notable about her particular situation is that her photos were clearly meant for Johnny Depp. I mean, you could infer that the other celebs’ nudes were also meant for their significant others, but Amber’s were actually stated in writing.

In several shots, Amber is seen naked in a tub, holding up a sign that reads, “Good Afternoon My Beloved Tonto Man. This Blonde Texan B*tch Will Eat You Alive. I Want. I Need. Give Me What’s Mine.”

Jeesh. Apart from being a terrible rhyme, their whole romance continues to skeeve me out. Naked photos? Naked messages? Amber, go find someone your own age. And don’t tell me that I’m being judgy or that age is only a number, because I’m sick of seeing Hollywood romances where the man is decades older than the woman and the woman acts like gold digger.

After seeing Amber Heard more or less play homewrecker in Johnny’s relationship with Vanessa Paradis, I don’t even know how Johnny’s kids are able to withstand the idea of Amber as their stepmother. Far be it from me to be all judgy, but how does Vanessa Paradis stand it – especially after seeing stuff like this in the media? She knows and we know that Amber’s relationship with Johnny likely started when she was still with him, and probably with photos like this.

Also, ‘Tonto man’? ‘Blonde Texan B*tch’? What are these cliche-ridden sexts? Johnny may be blinded by the age and the blonde hair, but is this crap sexy to anyone else? Anyone?