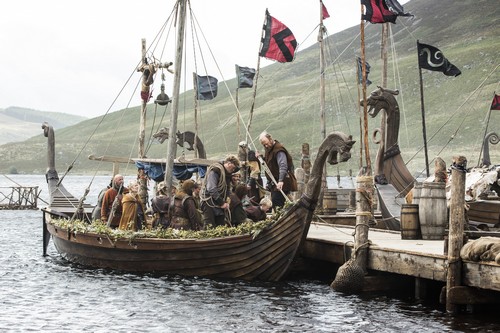 Tonight on the History Channel VIKINGS returns for the season 2 finale, “The Lord’s Prayer.” On tonight’s episode, when safely back at Kattegat with King Horik, Ragnar only trusts those who stood by him.

On tonight’s episode Ragnar and King Horik return to Kattegat and the final showdown between two Viking leaders is at hand. King Horik wants Ragnar out, but how we will he do it? Not by getting his hands dirty, he will use Floki and Siggy.

Tonight’s episode looks like it is going to be great and you won’t want to miss it, so be sure to tune in for our live coverage of The History Channel “Vikings” at 10:00 PM EST! While you wait for our recap hit the comments and let us know how excited you are for the season 2 episode 10 of Vikings tonight.

Tonight’s episode of Vikings begins with Floki and his wife Helga, she introduces him to his newborn daughter. Helga begs him to come home with her and get to know his daughter, but he hands the baby back to her and tells her she has to leave and he must stay and guard the docks.

King Horik’s entire family arrives, a ship full, and he rushes to introduce his wife and children to Ragnar. They prepare a huge feast and Horik gives a speech about his new partnership and reveals that they plan to take over much more land together.

Floki tracks down Horik at the feast and demand he know what the proposition is that Horik has for him. Horik responds that he still doesn’t know if he can trust Floki. Ragnar watches their altercation from a distance.

Floki corners Athelstan and asks him why he came back because no one wants him hear. Floki goes on to tell him that he “betrayed the Gods” and he is going to die. Horik corners Floki and tells him to “kill someone who matters” and prove to him that he can trust him.

The next day Floki sneaks in to Rollo’s room, he sends Siggy away and tells her that he will watch Rollo so she can get some rest. He forces something into Rollo’s mouth and tells him it is “the food of the Gods.” Rollo begins gagging. Later that night at dinner Floki sends a little boy to deliver the poisonous food to one of Ragnar’s men, he tells the little boy that if he tells a soul about the delivery the bad Gods will take him and torment him just like they did to Floki. The man keels over at the dinner table and dies.

Ragnar’s family finds Rollo dead and mourns. Floki promises Bjorn that whoever killed Rollo will be punished. Later Horik meats with Floki and tells him he “done good.” Next he wants Floki to kill Ragnar’s song Bjorn – he says he is difficult to kill because the “Gods are protecting him.”

Bjorn and his girlfriend are fighting. She thinks that even though the Princess freed her Bjorn still doesn’t respect her. She wants him to fight her. They meet up in a clearing by woods and proceed to get in a fist fight. Bjorn begs her to stop, but she continues to hit him so he hits her back. She runs off and he follows her and they have sex in the woods. Floki hides in the bushes watching.

King Horik has a proposition for Siggy. He tells her he will marry her and make her a Queen, if she takes away Ragnar’s youngest sons and kills them.

King Horik takes aside his son and tells him that the “Gods have spoken” and they must “gut and kill” Ragnar’s entire family. If any members of his family live then they will rise again and steal their power. Horik tells him that if he does the God’s work, then one day he too will be king.

Athelstan teaches Ragnar a prayer by the stream, meanwhile Siggy slips away with Ragnar’s two youngest sons. King Horik’s men arrive and begin taking out Ragnar’s guards, the rest of the village is asleep. They begin making their way through the town and killing every one they come across. Athelstan grabs a sword and begins defending Ragnar’s family, Lagertha marches into Horik’s cabin and kills his wife in retaliation.

King Horik arrives at Ragnar’s home, but he is prepared for his arrival. Floki and Siggy sold Horik out and warned Ragnar of Horik’s attack. King Horik begs Ragnar to spare his son. They slaughter Horik’s men and Floki marches his son out, leaving Ragnar alone with Horik. Ragnar literally beats King Horik to death, and takes the sword he had promise to his son.