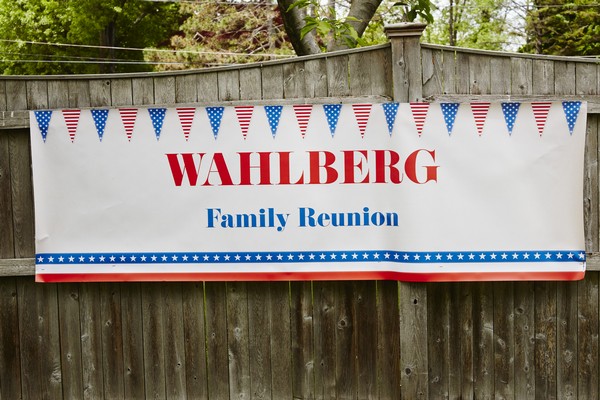 Wahlburgers airs tonight on A&E with a special 4th of July episode. On tonight’s episode it’s summertime in Boston and the Wahlbergs are kicking off the season with their annual family reunion.  This year there is a lot to celebrate at the reunion. It’s also Patriots’ Day and Jim Wahlberg, brother of Mark, Donnie and Paul, is in town to run the Boston Marathon.

For those of you who are not familiar with Wahlburgers, the show gives a behind-the-scenes look into one of Boston’s most well-known families, the Wahlbergs. Brothers Mark and Donnie head back to their hometown to join forces with their professed ‘most talented sibling,’ Paul, in their tasty business venture. A homage to their humble beginnings, the hamburger restaurant is home base for the gang from the old neighborhood, including the real Johnny “Drama” and their spirited mother Alma.

On tonight’s episode it’s summertime in Boston and Mark and Donnie are back in their hometown to kick off the season at the Wahlberg family reunion. This year there is a lot to celebrate; not only is it Patriots’ Day, but Jim Wahlberg, brother of Mark, Donnie and Paul, is in town to run the Boston Marathon. The whole family is eager to rally around and show their support for Jim as well as a couple of Donnie’s New Kids On The Block band members who are running the race this year. Paul plans to help out by preparing food for the big reunion after the race but first he must get Uncle Archie’s secret meatball recipe. Meanwhile, Mark offers to set up his hometown entourage, Johnny “Drama” Alves and Henry “Nacho” Laun, with an acting job, which turns out to be very different than what they had in mind. 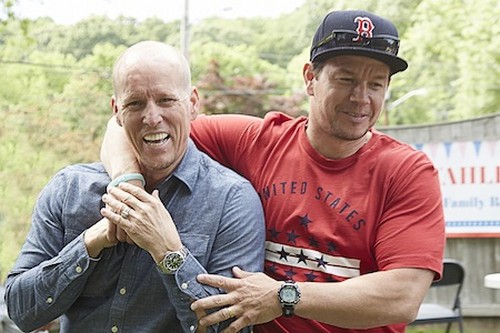 Tonight’s episode is going to be a great one and you’re not going to want to miss it. Whalburgers airs on A&E at 10PM EST, while you wait for our recap hit the comments and let us know how excited you are about this new exciting season!

Tonight’s episode of Wahlburgers kicks off with Donnie and their Mom Alma paying Paul a visit at the restaurant. Donnie says he is only going to be in town for a week, but Alma says that he has to stay for the family reunion and watch his brother Jim run a marathon. Alma and Donnie climb over the counter and decide to make themselves breakfast, much to Paul’s dismay.

Mark is preparing a box for Jim to give to him at his marathon. Mark’s childhood friend Johnny Drama wants to know if he can be in Ted 2. Mark says that it isn’t going to happen but he can get them in to another movie, and says it is a major acting opportunity for Johnny and their friend Nacho.

Paul watches in agony as Donnie cooks breakfast. They discuss the reunion, and their Uncle Archie is hosting it. Donnie complains about how Mark was Uncle Archie’s favorite, and when they were kids he always gave Mark $20 and didn’t give them anything because March was his god son. Uncle Archie always makes his famous meatballs, but Donnie says that he is going to make copies of his recipe so that they can make his meatballs for him.

Jim takes a break from training for the marathon, and visits Paul and Alma at the restaurant. Paul makes fun of his fluorescent orange shorts. But, Alma tells him to leave him alone because he is training for a marathon. Alma jokes about how when Jim was younger and in trouble that she actually was able to run him down and put him in a headlock.
Johnny and Nacho arrive at the address that Mark gave them for their acting job. They aren’t happy when they meet Bob and learn he isn’t a director, and Mark volunteered them to help with a Civil War reenactment for 4th of July. To make matters worse, Bob won’t let Johnny play George Washington. They get fitted with their soldier costumes and head home.

At the restaurant Paul is trying to make Archie’s meatballs. Donnie tastes them and says there is something wrong and they don’t taste like Archie’s meatballs. He thinks that Donnie is putting too much “fancy shit” in the meatballs.
Alma’s other son Bob comes over for lunch, Alma says that she is going to open the box. Bob tells her she shouldn’t, but she does anyways. They start eating the protein bars that Mark sent for Jim’s care package.

Nacho and Johnny Drama pay Mark a visit, and curse him out for sending them to the Civil War reenactment, and complain that they can only play recruits and not George Washington. Mark argues that his first movie he played a recruit. Mark says that if they want to be real actors, they need to suck it up.

New Kids On The Block’s Joey and Danny are both running the same marathon that Joey is running in. They try to convince Donnie to run with them next year while they are rehearsing for their tour. Alma and Paul crash their rehearsal so Alma can see the guys in the band. She reveals that she got a medal and got it engraved for Jim, and one of the guys has to go pick it up. Paul and Donnie argue over which one of them is busier and has time to go pick it up. Donnie finally caves and says that he will go pick up the medal.

It’s time for the Johnny Drama and Nacho’s big acting gig and the Civil War reenactment. They aren’t happy when they learn that they won’t be in the actual battle, and they have to stay behind and “set up camp.” They struggle setting up a tent while all the other guys go shoot their muskets. The guys return from their battle and yell at them for screwing up the tent. Bob screams at them and tells them to line up.

Afterwards Donnie heads over to Uncle Archie’s and he gives him a lesson in making his meatballs. Archie tastes them when they are done, and says that Donnie is “close” to the real meatballs, but he gives him permission to feed them to the other Wahlbergs at the reunion.