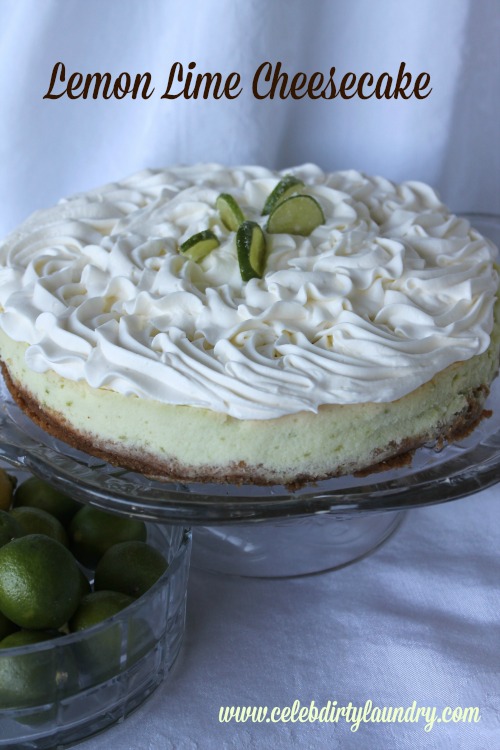 Who doesn’t love cheesecake? If you ask any average Canadian in the country what their favorite desert is, 8 out of 10 times they’ll say Cheesecake. And honestly, can you blame them? The smell, the taste! In fact, one of my best experiences with desert ever happened earlier this year, when I happened to stumble upon a local bakery in Quebec City and tasted the most exquisite cheesecake that I have ever had in my entire life. I mean, I was practically drooling, it was that good. And it was a regular strawberry cheesecake, no muss, no fuss and nothing else added to it. I wish I had gotten the recipe from them, but I doubt they would have given it to me. But it was so incredibly creamy and succulent that I’ve since been back there multiple times, and tried every single one of their cheesecake offerings. Because let’s be real – even the worst type of cheesecake is infinitely better than most other desert offerings, especially if made with the right care and attention.

We also have some exciting news for fans of cheesecake out there, especially fans that are able to bake or create their own cheesecake. The Real Women of Kraft Philadelphia are hosting a contest in which they’ll be searching for the “Philadelphia Cheesecake of the Year.” The contest began on June 2nd, which means you’re free to submit your own cheesecake recipe [with an accompanying image] for a chance to receive $5000 and get your fifteen minutes in the spotlight. The contest will last until June 16th, 2014 at 6 PM ET, and there are several prizes involved for those participating. The grand prize winner will receive the $5000, as well as the “2014 Cheesecake of the Year” title and be featured in a national print campaign. Five other finalists will be flown to Toronto [round-trip] for the Cheesecake of the Year Bake-off, which will be held at Kraft Kitchens. Plus, the first 250 eligible entrants will receive a free brick of Philadelphia Cream cheese, which basically means that you’re winning no matter what. I mean, who’s going to complain about making a cheesecake, right? At worst, you get to eat a cheesecake and win a brick of cream cheese. At best, you have a shot at winning $5000 and flying to Toronto!

Now, to be an eligible entrant, you need to make sure that you submit your ORIGINAL cheesecake recipe made with Philadelphia Brick Cream Cheese, and ideally, the cheesecake should be festive. The recipe should also be accompanied by a photo of your finished cheesecake. It should also not contain more than 20 ingredients, nor should it take longer than 2 hours to prepare.

You can view the full contest details and rules at the Philly Canada website, which is also where you can enter the contest:  So what are you waiting for? Get that $5000 prize!

Personally, we’ll be using a key lime/lemon cheesecake as our entry for the contest, and we’re feeling pretty confident about it. What about you guys? Will you be joining the contest? 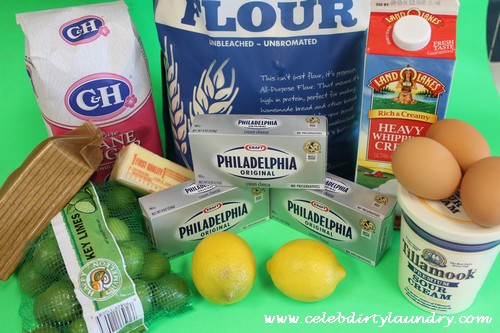 2. Mix together crushed graham crackers, 4 teaspoons sugar, and butter in a small bowl. Stir well or use your hand to knead the mixture together. 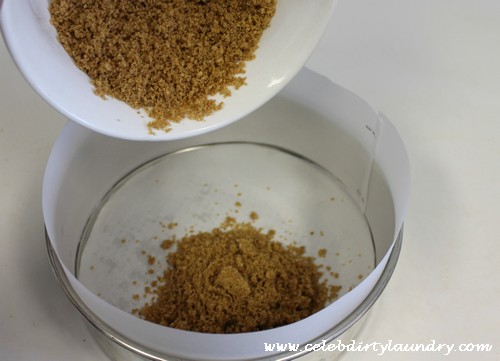 3. Grease the bottom of an 8 ½-inch springform pan lightly. For easiest release, cut a strip of parchment 1/2-inch to 1-inch taller than the sides of the pan and place it inside the pan, along the side. Staple it together at the top to hold it in place.

4. Press the cracker crumb mixture into the bottom of the pan. Make it as level as possible, pressing around the edges with your fingers or a measuring cup. 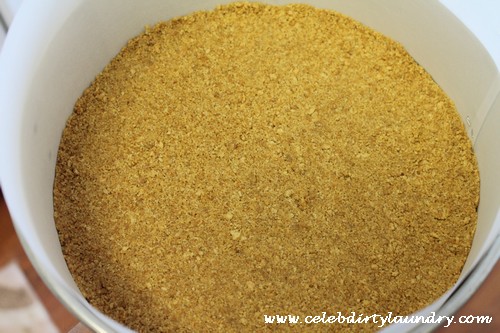 5. Bake for 7 minutes. Cool completely on a rack.

6. Place a pan of water (a cake pan or oven-safe skillet works well) on the bottom rack of oven. Set the other rack in the middle position. Leave the heat on 350 F.

7. Zest the limes finely with a grater. Just take off the green part of the skin to avoid bitterness. You should have approximately 1 tablespoon of zest. A little more or less is fine. Juice enough of the limes to measure 1/4 cup of juice. Combine with the zest in a small cup or bowl. Add a couple of drops of green food coloring if desired. Set aside. 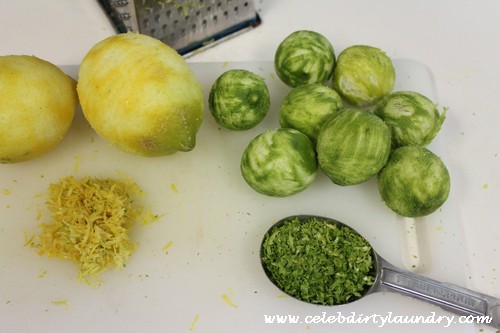 8. Zest the lemons finely with a grater. You should have approximately 1 tablespoon of zest. Juice the lemons. You will need 1/4 cup of juice. Combine with the zest in a small cup or bowl. Set aside. 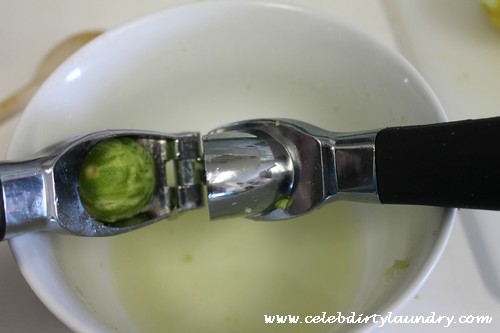 9. In a large mixing bowl, beat the cream cheese on medium-low speed for 3 minutes, stirring down the sides of the bowl and the beaters or paddle often. 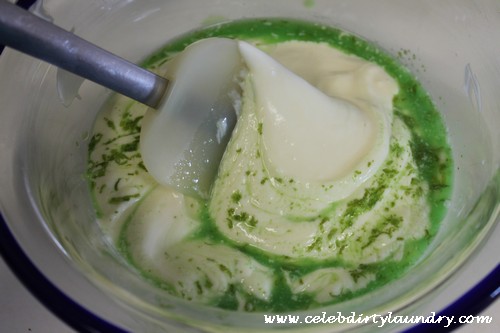 12. Turn the mixer to the lowest setting and add the eggs one at a time, beating just until each is incorporated.

13.Divide batter evenly between two bowls. Gently fold the lime mixture into one and the lemon mixture into the other. 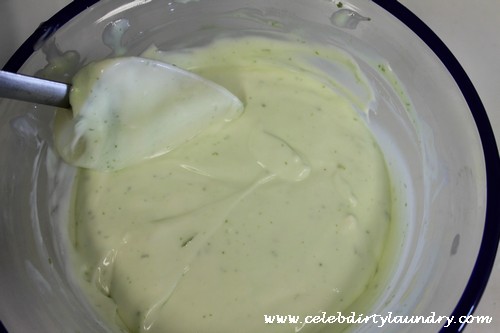 14. Pour the lime mixture into the pan, covering the crust evenly. You can shake the pan gently to distribute.

15. Pour the lemon mixture over the lime mixture. It will combine a little with the lime, settling in the middle and pushing a some of the lime out to the edge.  Shake the pan slightly to even the batter out, and then swirl a few times with a knife. 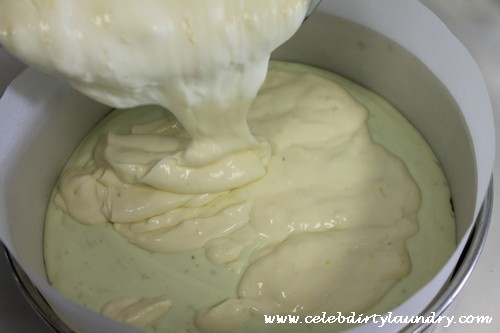 17. Remove cheesecake to a rack and allow it to cool completely. Refrigerate for 4-5 hours or overnight.

18. Release the springform pan and peel the parchment away from the sides of the cheesecake. Slip a long knife between the bottom of the cake and the pan bottom. Slide onto a cake plate. Top with whipped cream and sugared citrus slices if desired, and serve. 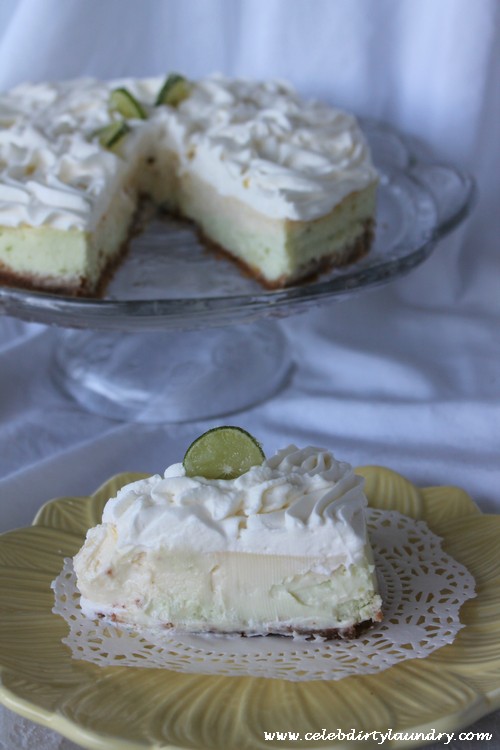 Disclaimer: This post was brought to you by Kraft Canada via SheBlogs. The opinions expressed herein are those of the author and are not indicative of the opinions or positions of Kraft Canada.