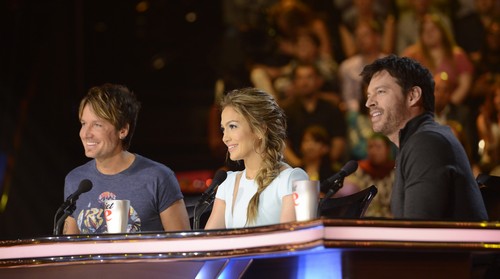 Tonight on FOX AMERICAN IDOL returns with the results show. One finalist out of the top ten is eliminated in a results edition. Also: Jennifer Lopez and pop rockers Royal Teeth perform. Did you tune in to watch the performances last night? If not we did a detailed recap of it all for you right here.

Last night the top ten contestants took the stage and had a chance to own the spotlight. Season 13 is really heating up and the remaining 10 singers performed Top 10 hits from 2010 or later. Ben Briley, Caleb Johnson, Jessica Meuse, MK Nobilette, Alex Preston, Dexter Roberts, Majesty Rose, Malaya Watson and Sam Woolf, C.J. Harris and Jena Irene all performed recent hits.  We also have all the videos of last night for your enjoyment.

On the tonight’s LIVE results show, tune in to find out who will be sent home. Additionally, international superstar andAMERICAN IDOL XIII judge Jennifer Lopez will perform her new single, “I Luh Ya Papi,” and pop rock band Royal Teeth also will perform their breakout single, “Wild.”

On tonight’s episode of American Idol it will be announced which one of the Idol Top 10 singers will be eliminated after America voted.  Ryan Seacrest takes the stage and introduces the American Idol Top 10.

Next Idol judge Jennifer Lopez takes the stage to perform her new single “I Luh Ya Papi” featuring a special appearance from French Montana.

Up next is an up and coming band from Louisiana called Royal Teeth, singing their single “Wild.”  Harry Connick Jr. personally recommended Royal Teeth sing tonight on Idol, he thinks they are great.

It’s time to reveal who will be going home tonight on American Idol.  According to America’s votes Majesty Rose and Dexter Roberts are safe.

MK Nobilette has officially been eliminated from American Idol.