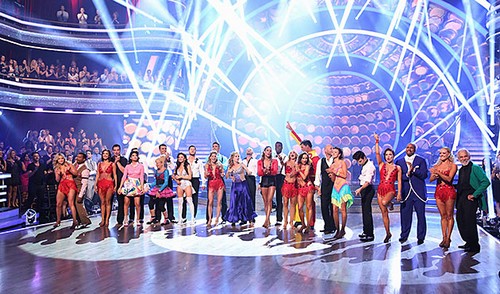 Tonight on ABC it’s the Dancing With The Stars first elimination of Season 19 and we will say goodbye to one contestant tonight. On tonight’s show the 13 contestants performed one of the following dance styles: Cha Cha, Foxtrot or Jivea.  Did you watch the premiere episode? If you missed it we have a full and detailed recap, right here for you.  Did you miss any of the performances? If you did we have all the videos here for your enjoyment.

After last week’s performance at the top of the leaderboard is Alfonso Ribeiro & professional dancer Witney Carson who performed a Jive and were awarded a 37/40 by the judges.  Carrie Ann gushed about their performance saying, “You raised the stakes my friend, excellent.”  At the bottom of the leaderboard is Betsey Johnson & professional dancer Tony Dovolani who had a mishap with a Boa.  The two were scored a 20/40 by the judges.

On tonight’s show one couple will be eliminated by combining the judges’ scores from Monday night’s performance with the public votes. Tonight’s show will feature music legend SMOKEY ROBINSON performing a duet of “My Girl” with ALOE BLACC off of Robinson’s new album, “Smokey and Friends.” The show will also feature a special dance number performed by the three new pros: Allison Holker, Keo Motsepe and Artem Chigvintsev.

Tonight’s results episode of DWTS opens up with a group dance by the DWTS troupe.  The opening number was choreographed by Mandy Moore.

We are getting a review of last night’s show the dances, the dancers, the scores and highlights from the judges comments.

The judges as for an encore of Alfonso Ribeiro & Witney Carson’s dance from last night.

The first results are in: