BY Heather DiPietro on May 21, 2014 | Comments: 3 comments
Related : Dancing With the stars, Reality TV, Recap, Television 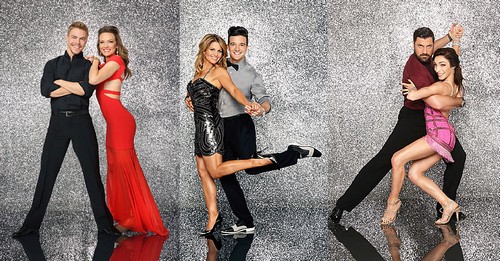 Tonight after weeks of fabulous dancing season 18 of Dancing With The Stars comes to a close and one couple will win the coveted Mirror Ball Trophy.  After last night’s part 1 of the finales James Maslow was eliminated after several rounds of dancing, including a freestyle performances featuring special effects.  Did you watch last week’s episode?  If you missed it we have you covered with a full and detailed recap, right here for you.

On tonight’s finale show, it began with a high-energy performance featuring a reunion of all 12 of this season’s couples as well as the judges. Then, as decided on by a Twitter vote, one of the three remaining couples will perform their Freestyle dance as an encore. The finale will also feature a performance to “Livin’ La Vida Loca,” by Team Loca, giving viewers at home a chance to watch the routine live with Amy Purdy, as she was unable to dance during the original Team Night due to an injury. Additionally, viewers will be treated to encore performances by Drew Carey and Cheryl Burke to “You Can’t Sit Down,” NeNe Leakes to “Grown Woman” featuring six Pro Dancers, Danica McKellar and Val Chmerkovskiy to “Be Our Guest,” and Charlie White and Sharna Burgess to “Supercalifragilisticexpialidocious.” Additionally, Olympic Gold Medalist partners Charlie and Meryl will dance together for the first time. In the last element of competition, the couples will perform a new routine as part of a “24 Hour Fusion Challenge.” The remaining couples will fuse two contrasting dance styles that they’ve performed this season and they’ll have less than 24 hours to prepare that dance for judges’ points.

The finale will also feature last season’s Mirrorball Trophy winner, Amber Riley, who will return as a part of Walgreens’ “Dance Happy Be Healthy” performance of “Do Your Thing” plus her first single “Colorblind.” The finale will also feature musical performances by Christina Perri singing her ballad “Human,” Iggy Azalea featuring Charli XCX will perform their hit “Fancy,” Season 18 contestant Cody Simpson will treat fans to his hit “Surfboard” and Ariana Grande will perform her new single “Problem.” At the end of the night, the public vote from Monday night will be combined with the judges’ scores from both nights to crown the Season 18 Champion. If you missed the finale part 1 performances, we have them all here for you.

Who do you think will win?  Make sure to come back to this spot tonight at about 10:00PM and we will be covering the live recap of who goes home with the Mirror Ball Trophy and is crowned the winner of season 18 of DWTS.   Sound out in the comments below and let us know your thoughts!  Who will win?

WINNER OF THE MIRROR BALL TROPHY and 2014 DWTS