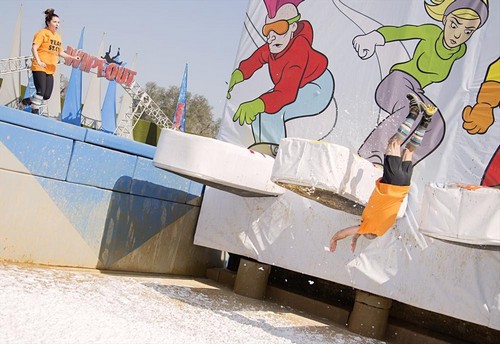 Tonight on ABC thier hilarious game show WIPEOUT is back with a 2 hour special and its seventh season premiere called, “Fall in the Family.” On tonight’s show the 7th season begins with a family edition, featuring 12 teams of two family members. Obstacles include: Big Balls Bonanza; the Shed Zone; and the Classic Sweeper.

For those who are new to the show, Wipeout is a game show series in which contestants compete in what is billed as the “world’s largest obstacle course”. Wipeout is hosted and commentated by John Henson and John Anderson, while Jill Wagner acts as the “on-location” presenter.

On tonight’s show first up on the battle royal of family vs. family, we have the all new qualifier round where our 12 teams will show off their suave snowboarding skills in “The Shed Zone,” where the slopes hit you. As our families continue on their quest for cash, they face the first ever family version of Big Balls Bonanza, where a member from each team will be chosen to compete in the challenge and the farthest jumper will win $5,000 for his or her team. The course continues to dish out discipline as the remaining teams move onto the granddaddy of obstacles, the Classic Sweeper. Only the remaining two teams will take a family trip to the all-new Wipeout Zone for a chance to win the grand prize and earn a spot in the first ever “Tournament of Champions” at the end of the summer.

RECAP: This season of Wipe Out is all about family, the first family up today is Team St. Cyr; they are a father and daughter duo. They sadly wiped out on every course and the clock stops at 7:19. The next guys are from the bike club and they so far have first place, having wiped out on each course as well.

Next we see the mother and daughter combo Sheila and Taylor and they fail fail on the first course; taking up so much time.

We now see Sheila and Taylor at the suckerpunch, Taylor takes a hit in the face and is thrown down; Sheila is taking her time, but also gets a punch in the face. They are now at the big balls and Taylor wipes out right on the second ball, Sheila takes it to the big balls and she gets hit by the motivator and sent flying off the side of the platform. Sheila just quits.

Next up is the sister combo of Caroline and Julia Bonilla; they laugh like birds. The sisters pretty much wipe out before they even make it to the first course and then wipe out again. The sisters are taken out at the sucker punch fast and keep making that weird bird laugh. Next ups the two brothers who are male models Yoshi and Peter Sudaruso, they wipe out on the shred zone fast twice each. The brothers are now at the dino dash and they the brothers actually get the top spot at 5:47.

We now see Kenronte and Courtney who are cousins, Courtney gets destroyed by the motivator on the big balls and she wants to give up; Kenronte is telling her to keep going but they end up dropping out.

The next family up is is brother/ sister who are Brandon and Veronika, Veronika brought Brandon here to get him back for how he always picked on her; they both get knocked out at the punch zone. We now see a father and son team Daniel and Tucker being destroyed by the shredder. They get to the big balls and Tucker almost makes it to the last big ball before wiping out. Tucker keeps complaining on why they never decided to do this the whole time, they fail on the  dino zone and take home second place at 6:29.

Next up is twins, the final family Terrissa and Judith, the wipe out fast on the shredder and on the suckerpunch, the girls are are wiping out on every course trying to beat the current last place team; thought they completely fail. The teams going on too the next round are the male models Peter and Yoshi, Tucker and Daniel, bike club Taylor and Nicholas, Ken and Julie. Matthew and Courtney, Brandon and Veronika, Nathan and Joanie, Julie and Caroline.

Next up is the the Space Race, if both family members get across together gets $1000. The teams start going down and one of the bird sisters slams right into the course and is the first to wipe out; Nick from the bike club is very close to finish though now it’s Matthew who makes it first. Brandon also makes it to the end. Nick makes it the third time, the model brothers are there now also moving on. The final six teams moving on are Matt and Courtney, Brandon and Veronika, Taylor and Nicholas, Peter and Yoshi, Daniel and Tucker, Ken and Julie.

Now we are at the next round called the family version of the big balls bonanza, the winning team wins $5000; each team will choose one member to bounce over the balls and the team that makes it the farthest wins the money. The first team is Ken and Julie, Ken is going to jump this round; Ken makes it to the fourth ball and wipes out. Brandon is up next instead of his sister Veronika, Brandon wipes out farther than Ken taking the lead. Next up is Matthew, he wiped out earlier and Brandon keeps the lead. Next up is Nick from the bike club, he pretty much reached the maximum distance but wiped out. Next person has to land on the platform to win the money, Tucker decides he will do it for his dad and if he fails he walks home. Tucker makes it right across and lands on the platform perfectly, next up is Yoshi and he actually lands on the platform as well making it a tie.

Now Daniel is up to break the tie for his son Tucker, Daniel runs and lands on the platform with an amazing flip. Now it’s Peter going up to see if he can win it for him and his brother Yoshi, Peter makes it right across as well. Now both families are splitting the money.

The next round is a brand new obstacle course called the Purple Beater. The first four teams to make it to the end move on, bike club Taylor is in the lead and wipes right at the end. Brandon also wipes at the end, Daniel goes next and gets destroyed. Daniel is the first one through, while everyone is constantly failing.Courtney slides down and fails like the others, Brandon makes it through for second place. Tucker also makes it through following up with his dad, bike club Nick also makes it right through. Matthew then slides right through as well; following right behind is also Yoshi. Peter is than next making the model brothers take second place. Courtney goes right through making the West sibling take third place, only one more team can move on. Fourth place is the bike club member Taylor giving us our four last teams.

Our final four is Daniel and Tucker, Peter and Yoshi, Courtney and Matthew, Nick and Taylor.

Now we are at the next round, Yoshi hurt his leg last round but has decided to fight through the pain; this round is called the sweeper. the sweeper is going nice and easy now, Courtney is the first one to wipe. Daniel is going down, but tries to climb up; making it completely though falls on his next jump. Tucker is now down and Matthew follows. Peter then goes down, Taylor goes down and the one legged warrior Yoshi has his brother Peter move on to the final round together.

Now the second round is up and the first to fall again is Courtney, Daniel is the second one down. Tucker follows his father dropping as well. Nick drops and it’s between Matthew and Taylor, though Matthew drops and the bike club moves on!

The first person is the bike clubs Taylor, he is in the cannon and is blasted out into the air and wipes out on the shredder right away, next up he is sweeped right off his feet, now at the last part of the course is the fears, Taylor and he drops right at the end.

The second person up is bike clubs second member Nick, he got half way through the shredder but fell right through the jump. He misses his step on the sweepers and drops right into the water, the last obstacle the gears of fear is up next; he has on more jump left but wipes out. their time is 5:04.

Next up is Peter and he wipes right at the half way point of the shredder, he then wipes at the sweepers as well swimming up to the last place. He fails right away on the gears of fear and makes it to the end.

Last up is Yoshi and he is limping a bit from his knee injury, he makes it into the shredder and is the only person to cross through it today; though he wipes on the sweepers. Now it’s the gears of fear, the last obstacle for Yoshi. Yoshi falls and now has a whole minute to climb up the ladder and finish first place; the brothers win it coming in at 4:20. Yoshi showed a lot of courage with his injure leg and even won it, they will be in the tournament of champions at the end of the summer.