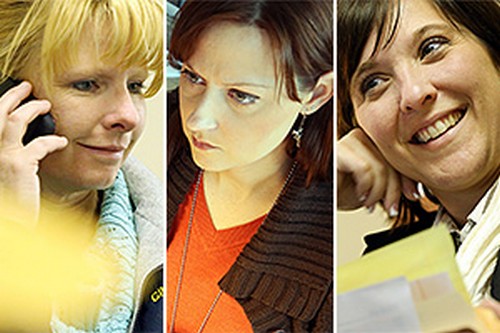 Tonight on TLC their new show Women of Homicide airs with its second episode.  On “Wrong Place, Wrong Time,” a drug deal in Cincinnati leaves one man dead and another paralyzed; an Atlanta business owner is murdered in front of his home.

If you did not watch the season premiere last week Women of Homicide takes an honest and unprecedented look at life as a female detective in the male-dominated world of homicide investigation.  Walk the streets with Cincinnati Detectives Jenny Luke and Jennifer Mitsch and Atlanta Detective Summer R. Benton to get an exclusive look at homicide investigations as they unfold.  The show trails these three determined women as they work relentlessly with their partners to make their cities safer by putting killers behind bars.

On tonight’s episode When a drug deal leaves one man dead, and another paralyzed from the neck down, Detective Mitsch works diligently to find those responsible. Meanwhile, Detective Benton hunts for the person who murdered a business owner in front of his own home.

Tonight’s episode looks like it is going to be a great episode and you won’t want to miss it, so be sure to tune in for our live coverage of TLC’s “Women of Homide” Season 1 episode 2 at 9 PM EST! While you wait for the recap, check out our sneak peek video of tonight’s episode below!

It’s tough for women in the police force. Not only do they have to juggle their careers but then they have to go home to take on the traditional role of a caregiver. So when you think about it there’s never a break for them because at the end of the day there’s not a break from crime or family.

A body was discovered by a neighbor while they were heading out to work early in the morning. Victim #1 was found shot to death on his own lawn. His body showed initial showed signs of having been moved and the ME later said he was shot in the head. Now Detective Summer Benton was unable to find the victim’s car at the scene and so she fears that the victim might have known his killer.

A missing car along with the fact that someone shot him execution style means that this was more than a simple carjacking and that’s why Summers needed to see the cell phone records.

His name was Terry Porter and the only family the police were able to notify at the time was his sister.

Meanwhile in Cincinnati, Detective Jennifer Mitsch had a double shooting. One of her victims was announced dead at the scene, but the second shooting victim was taken to the hospital where he’s currently in critical condition.

The man found dead was in a particularly bad neighborhood to be rocking a Klan tattoo. And at first the detectives thought that must have played a part in his death. That is until they saw the footage – surveillance cameras picked up the shooting and they were able to bag evidence the killer had willfully left behind. Like the jacket the killer tried to discard because they knew blood splatter would be on it.

Back in Atlanta, Summers and her people are beginning to suspect that there may have been more than one assailant. They came to conclusion after the ME told them the victim hadn’t showed signs of a struggle. Well how can that be when he was killed execution style? He would have tried to fight before being forced into the grass.

Porter’s family appears to be of the same opinion. A relative of his came to the station and told Summers that Porter wouldn’t have been surprised like that.

However both cases suffer from one thing – a lack of witnesses. Everyone wants to help, but to a point. Mitsch living victim was asked to identify his killer and he couldn’t. He was unable to speak with a tube down his throat and yet he didn’t want to fully cooperate with the cops either.

And that could be because he doesn’t want to implicate himself. But it’s much too late for that. The detectives know these two guys from Kentucky drove up to their city to make a drug deal and the deal went south for some reason. It could have been greedy drug dealers or maybe the victims with Klan tattoos insulted one of the black guys they were buying the drugs from.

Whatever the case, Mitsch and her people found a valuable suspect. Now Collier is claiming that he had nothing to do with the shootings. Though he will admit he was in the vicinity and that he heard the gunshots.

So Cincinnati has someone while Atlanta has gotten stuck in their investigation. Unlike how these things are portrayed on TV, murder investigations don’t get solved within two days. Sometimes it can even take years to solve and Porter’s murder was beginning to look like one of those cases. And then they found the victim’s car.

Once the car was found; that’s when everything started to fall into place. The person that stole the victim’s car and credit cards had gone for a joyride. He used the card at a nearby gas station. But he appeared to have forgotten about hiding in front of surveillance cameras because the video feed gave Summers a clear view of his face.

Mitsch’s suspect dropped hints here and there yet he refused to admit to the crime. His only saving grace is that he had mentioned a friend during questioning. “Guru” was also brought in for questioning and he too denied taking part. But the victim in the hospital was able to clearly identify his shooter after the detectives showed him pictures of the suspects.

Ryan was picked out and when they told him about it – he claimed to have been part of the robbery, but he swears it was his friend that pulled out the gun. While Guru isn’t saying anything even after he was told that his friend rolled on him.

It doesn’t matter though. Both men will be charged for murder because of their part in the shootings.

Ryan was the first to be convicted for the double homicide. The second victim had died from his injuries in the hospital and Guru is still awaiting his trial.

Summers’s killer cracked during questioning. He had several priors before meeting his latest victims and still Porter tried to help him out. The killer called him asking for help that night and when Porter brought him home – he was killed for being a Good Samaritan.