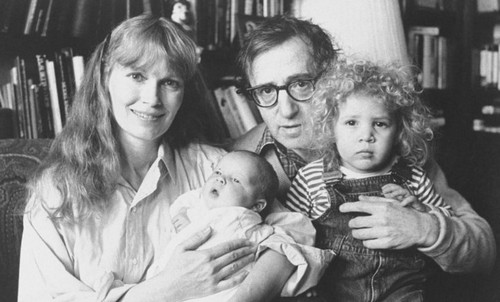 After we reported to CDL readers that Dylan Farrow, adopted daughter of Woody Allen and Mia Farrow, had penned an open letter, published in the New York Times, detailing the years of molestation she was subjected to in the hands of her father, the famed director has finally publicly responded and it is not pretty. In fact, it is disturbing and sickening, to say the least.

An op-ed column released Friday by the New York Times, in a carefully-crafted response, likely with the help of the most savvy PR people he could get his hands on, Allen counters his adopted-daughter’s claims by attacking her mother, Allen’s former wife Mia Farrow. In an obvious attempt to clear his name, show empathy toward his daughter’s pain, and to plant the idea that the accusations made were part of a scheme for his ex to get the upper hand in their bitter divorce battle.

Allen blames his ex-wife for coercing her daughter to make the allegations against him. He goes on to say that he believes his daughter does, in fact, believe the molestation occurred, but later adds that it was a solely as a result of her mother’s years of brainwashing. Not so, counters Dylan Farrow in this battle, now becoming much more public and combative. In her rebuttal, provided to The Hollywood Reporter, Dylan has obviously grown stronger and more confident since her courageous first public admittance of abuse. She challenged every point in Allen’s response and goes on to encourage even his biggest fans to read the Vanity Fair article written by independent, well-respected journalists, whose thorough research support her claims and provide some critical facts that may not have been made public before.

While Allen places all the blame for the contrived molestation story Dylan has shared on his former wife, he attempts to discredit both mother and daughter by offering what he feels is proof of his innocence. However, for every bulleted-point Allen provided in his letter, as what he considers “evidence” of his innocence, Dylan offers a steadfast response that negates every point he made in his public letter. She provides great detail and a sense of sincerity in her response.

If Dylan’s response, along with the article in Vanity Fair is still not enough proof for those naysayers who still believe Allen is the victim here, perhaps an interview Allen gave to People in 1976 will be the nail in the coffin. As reported by TMZ, an interview published by People quoted Allen, then 41, as saying, “I’m open-minded about sex. I’m not above reproach; if anything, I’m below reproach. I mean, if I was caught in a love nest with fifteen 12-year old girls tomorrow, people would think, yeah, I always knew that about him.” He then added, “Nothing I could come up with would surprise anyone…I admit to it all.” Apparently, his feelings toward admission have changed a bit and he still remains firm in his denial of any molestation claims. This war seems far from over and Dylan Farrow is not backing down, so as you continue to deny claims that you’ve molested your daughter, Mr. Allen, you may want to brush up on those acting skills.