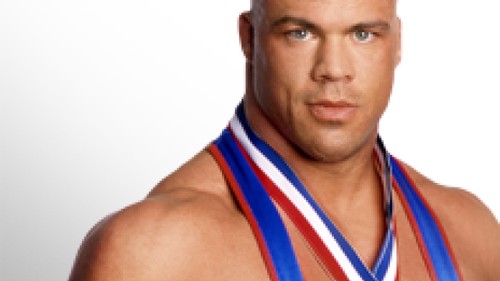 For what seems like an eternity, WWE news has teased rumors that something really big is coming with The Bulgarian Brute, Rusev and his svelte mouthpiece Lana. They have run over some of the best talent in the WWE including Mark Henry, Jack Swagger, The Big Show and countless others. Generally speaking, the WWE has booked Rusev to be an absolutely unstoppable force. They have tried to shove several people into the “American Hero” box that they need to face the foreign threat and none have fit the bill.

The real “perfect fit” for this particular role would be the real American hero that wears wrestling tights… Kurt Angle.

Angle has made it clear that he would gladly return to the WWE to finish out his storied career but so far there have been no bites. That said, we never know what is going on behind the scenes.

If I have learned one thing over the years, I have learned that Vince McMahon will let go of animosity to make money. No bridge is ever too burned with Vince. Kurt Angle was rumored to be tough to handle and he certainly has had his share of personal demons over the years, but his talent and desire are unmatched. Few wrestlers come to the WWE without a little bit of baggage anyway. Why single out Kurt?

By all accounts, the guy has made some positive changes. This could be the ultimate story to bring him back for one last hurrah.

Rusev continues to run over everyone in the coming weeks. At The Royal Rumble he goes into the ring and refuses to leave until someone comes out to face him. Some random jobber comes out and Rusev predictably destroys them. Then, right as he is about to leave the ring, Angle’s music hits.

Angle comes to the ring and cuts a phenomenal promo and they come to blows for a moment.

Instantly, you have a seriously powerful feud and the ultimate build up to a Wrestlemania match that will matter.

If the WWE wants a staple match to really build up to Wrestlemania season, they truly should consider Kurt Angle returning for Rusev. Not only would it send Angle off properly….it would also boost Rusev to the moon.

Kurt Angle deserves this type of send off and only the WWE can truly give it to him. To waste his incredible popularity and drawing power would be foolhardy for the WWE at this point. They need an infusion of wrestling magic and Angle can give it to them with no problems.