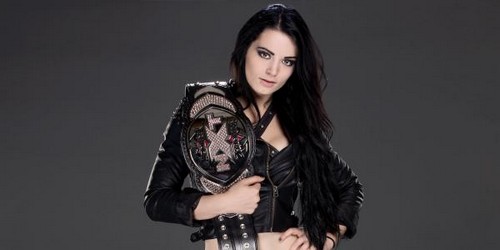 For a very long time, Paige was known as the anti-diva in NXT wrestling. She was the most over Diva on the developmental roster and some might even say on the WWE roster overall. The reason she was so popular and well received was because she was old school. Paige knew what to do between the ropes and cared little about what she looked like doing it. In fact, she was the opposite of everything the other “model’ divas were known for. Eventually, she was moved to the top of the heap and her move to WWE was inevitable.

Then, the night following Wrestlemania 30, Paige appeared out of nowhere and defeated A.J. Lee for the Divas Championship. The pop was humongous and the WWE Universe was thrilled…but something did not seem right.

The Paige that came out and cautiously accepted a match with A.J. was not the Paige that was the darling of Internet fanboys everywhere. This was a watered down, laid back, almost scared Paige.

Many people in the WWE Universe was confused about why they tinkered with her character when they brought her up. There was nothing wrong with her to begin with, so why mess up a good thing?

Then A.J. Lee comes back and Paige drops the belt back to her. Then Paige loses the rematch at Battleground and one had to wonder if the push was over already. The push was over….for the watered down Paige.

Suddenly Paige reappeared on Raw last night as the character we came to know and love on WWE NXT. She turned on A.J. and left her in a mess behind the announce table by the time the pounding was over with. Most importantly, the sweet innocent Paige was gone. In her place was the hot-headed Paige that was known for her in-ring ability and fierceness.

Perhaps WWE had it planned, but this is one relieved WWE fan. I had hoped the real Paige would get her shot at the big time. For a time, it did not appear as though she would. When she attacked A.J. it was as though I was watching her in developmental again. That is a huge compliment because her work down there was some of the best work I had ever seen from a Diva. It brought back memories of ….dare I say it… Lita?

Thankfully, the WWE has gotten it right.