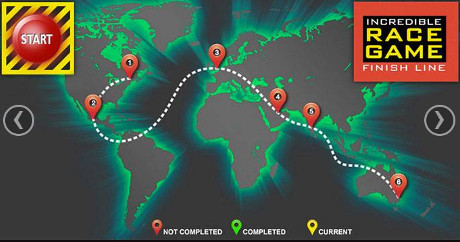 Critics believe that the epoch of reality television has reached a denouement, almost as if we’re watching the final, tragic act of a decade long sociology experiment. The juggernauts like Survivor, American Idol, The Amazing Race, X-Factor, and Big Brother are facing television’s version of Armageddon. If it weren’t for the loyal fans and the atypical personality clashes, reality television would have already been done for.

Zwooper is a prime example of this undying loyalty. The “reality television meets social networking” amalgam might sound foreign and juvenile to some, but don’t judge a premise by its beautiful cover. Although Zwooper follows in the footsteps of other sites like Tengaged and Reality TV Games (RTVGames), Zwooper outwits, outplays, and outlasts its competitors by focusing on replication and emulation instead of schoolyard popularity contests.

Zwooper launched with The Incredible Race Game as its main focal point, but instead of emulating The Amazing Race, Zwooper focused more on Kongregate-type flash games and offered players the opportunity to build up “points” (ranking system) and “chips” (currency) in preparation for the launch of Zwooper’s magnum opus, Survival. Players use these chips to buy new accessories for their avatars, effectively upgrading the avatar to match their personalities, ranking, and popularity.

“We began work in September 2012, and after 8 months of coding and design, launched the ‘Beta’ site on May 27 2013, with a full launch 2 months later on July 27. The first game was The Incredible Race Game, which was well received and kept players amused while we continued to develop our biggest game – Survival. I have worked closely on many projects for a number of years with Pawel Martuszewski (Ghoku) who is a highly talented coder, and once we realised there was a gap in the market for a serious gaming website based on some of the most popular TV shows in the world, the idea of Zwooper was born,” said Steve Harris, one of the creators of Zwooper.

“The original idea really came from Trishy (Trisha Harris – my wife) who is also the Avatar artist. She and I then devised the concept. We both designed the look and feel [of the website], we both came up with the name and she designed the avatar style. Then it was all handed to Ghoku to begin coding. The 3 of us are equal partners in Zwooper and have contibuted equally to its success.”

Zwooper’s adaptation, titled Survival, replicates the show with scientific precision. There are immunity and reward challenges, tribal councils (evictions), hidden immunity idols, a merge and seven jury members. The entire game lasts just over 10 real days (21 game days – 12 real hours per day), but don’t let the duration intimidate you — it is almost impossible to reach the finals. Survival is an emotional rollercoaster filled with blindsides, alliances, backstabbing, flushed idols and camaraderie. It is exactly like the show, sans the hunger and emotional isolation found on a nowhere-island.

Harris and his team are rewriting the future of reality television by eliminating the proverbial fourth wall and giving loyal fans the opportunity to experience the shows firsthand. Thanks to ubiquitous moderation and fair character judgment, Zwooper also manages to steer clear of the neo-sexist mentality found on similar sites.

Let us know what you think about this new platform!