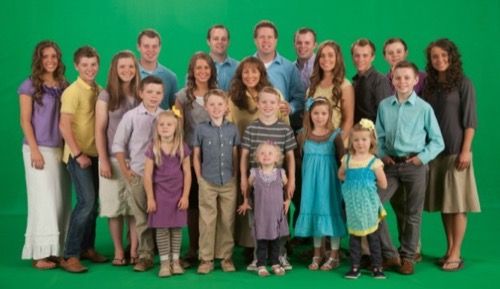 Tonight on TLC 19 Kids and Counting starring the Duggar Family continues with an all new Tuesday February 17, season 9 premiere episode called, “Jill’s Secret,” and we have your recap below. On tonight’s episode, in the season premiere, Jessa and Ben’s wedding is on the horizon. Did you watch the last episode? If you missed it, we have a full and detailed recap for you right here.

On tonight’s episode as per the TLC synopsis, “In the season premiere, Jessa and Ben’s wedding is on the horizon, but time is running short to get everything ready. Meanwhile, Jill surprises her family with a big announcement.”

Jill and Derick are enjoying married life. He says she cooks a lot of food and yells loudly in the house as she’s so used to living with so many people.

Everyone is excited for Ben and Jessa’s wedding, which is being planned just two weeks after Jill and Derick’s wedding happened. They have two and a half months to get this wedding planned, slightly less time than Jill and Derick had.

Ben and Jessa are working together to plan the wedding. For the reception they want ice cream and ice tea. They don’t want cake.

Michelle says that unlike Jill’s flowery wedding, Jessa’s will be more “simple and to the point” according to her personality.

Jim Bob and Michelle are helping Jessa and Ben by letting them start out in the same house Josh and Anna spent the first five years of their marriage, where their children were born. They are finding a lot of mold in the house.

Jessa likes the idea of a smaller house because it takes less work to maintain than a large house like Jill and Derick’s.

Jill’s little sisters are coming over for a sleepover. Derick says in confession that he definitely has a lot of respect for Jim Bob for having nine daughters.

Jill is going shopping for dress up clothes. She says in confessional that since the two of them aren’t preventing pregnancy, they know she could get pregnant at any time and she thinks this will help him prepare for fatherhood.

Joy gets her wisdom teeth removed, and she is showered with gifts.

Jill and Derick play dress up with the girls. Afterward, they move into the kitchen and have a chocolate fondue party and paint the girls nails. They end the party by having a bible study session.

Jessa is getting bridesmaids dresses from the Internet. She says if they arrive and the ladies don’t like them, she may make them wear them anyway. She’s still looking around for wedding dresses. She hasn’t decided on the style or kind of dress that she wants. She is going to have ten bridesmaids: some her sisters, some Ben’s sisters and some her friends.

For the dresses, she wants something “modest” that already has sleeves and falls below the knee.

Jim Bob says their family believes modesty is important for everyone, male and female. Unsurprisingly, one of the sons says that there are basically no modesty requirements for men, but there is a limit. Michelle says you don’t have to worry about the boys as much as the girls, but tight pants may not be so appropriate for a wedding.

Jill and Derick are going to her family’s house to join in on Bible time and surprise them with some news. When they arrive, Jill says she has a confession to make. She tells them that yesterday she was over here and stole something from her mom’s bathroom cabinet. Derick says that they had taken a couple of negative pregnancy tests earlier, and then took another one yesterday which turned out positive.

In confessional, Derick says that if it’s God’s plan he could definitely see them with 19 children. Jill says it’s crazy to think that less than a year after they met in person, they’re having a baby.

The couple calls Josh and Anna. Anna says they’re a little jealous, but so happy for them.