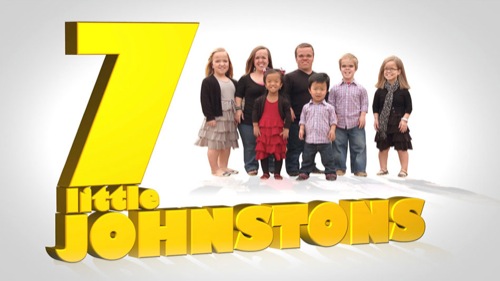 Tonight on TLC 7 Little Johnstons returns with an all new Tuesday January 6, special episode called, “A Little Home Improvement,” and we have your recap below. On tonight’s episode, the Johnston’s are an average American family of seven except everyone is a little person and they are in the middle of renovations.

For those of you who don’t know about the show, on paper they might seem like your average family…yet in person, they attract a lot of attention…. because all seven members of the Johnston family – Amber, Trent, their two biological children, Jonah and Elizabeth, as well as their three adopted children, Anna, Emma and Alex – happen to have Achondroplasia Dwarfism. Together, these spunky seven make up the largest known family of Achondroplastic dwarfs in the world, and even describe themselves as “the real life seven dwarfs.”

On tonight’s episode as per the TLC synopsis, “the Johnston’s are an average American family of seven except everyone is a little person. Distinguished from others as they only depend on each other to prove size doesn’t matter. They juggle family and health issues in the middle of a home renovation.”

Tonight’s episode is going to be great and you won’t want to miss it, so be sure to tune in for our coverage of the show tonight at 9 PM EST! While you wait for our recap hit the comments and let us know how excited you are for this special episode of 7 Little Johnstons.

Tonight’s episode of 7 Little Johnstons kicks off with a typical morning in the Johnston house – their house is still under construction, so they only have on bathroom to share. Amber makes her rounds and get all the kids up for school, and drops them off. Then, she heads home to take care of her daughter Anna, who is 14 years old. Anna jut had surgery on her spine and isn’t able to return to school yet.

Amber takes Anna to her doctor’s apartment to get a check up – on the way to the hospital she reveals to Anna that she won’t be able to go to her brother’s football game that night. Anna meets with Dr. Fletcher and Amber explains that Anna wants to go back to school and she misses her friends. Dr. Fletcher explains that the screws they put in her spine are really strong – and she would have to do something “really heroic” to damage her spine. He agrees to let her start going back to school for half days and to work her way up to a full day.

Later that night the Johnston’s get ready to head to the football game to watch Jonah perform in the marching band. Trent calls sister Heidi and tells her to pick up some food for the kids on her way home. She’ll be watching the smaller kids while Trent and Amber head to Jonah’s football game. Amber arrives with Anna, and get her settled in before she leaves.

Trent and Amber arrive at the game and Elizabeth rushes off to see her friends. They head inside to check in on Jonah – this is his last halftime show of the season and Jonah is determined to end on a high-note and make it the bet show of the season. Trent, Amber, and his sister make it up to the top of the bleachers so that if the crowd gets excited and stands up they can still see.

The next day the Johnston’s get to work on remodeling the girls’ bathroom – Amber thinks it is important for the girls to have their own bathroom because they are becoming young ladies. And, since Anna’s surgery she hasn’t been able to take a shower by herself – so they want a more handicap accessible bathroom. Amber and Trent are doing all of their own home repairs – they don’t want to hire anyone to do something that they can do themselves.

The kids are not thrilled about it, but Anna finds jobs for them to do because it is their house too. She gets them all masks, and get them to work sanding down a wall that they are preparing to paint. Meanwhile, Elizabeth heads outside and helps Trent while he is working on the pipes underneath the house. Later that evening, Amber and Trent surprise the kids with a fire in the fire pit outside and they all make smores, to reward them for all of their hard work.

The next morning it is Trent and Amber’s 16th anniversary, Trent decides to try and do something special for Amber. He tells her that he has to go run a few errands, and she needs to pack a bag while he is gone. Trent heads to a lingerie store, and decides to buy Amber a silk robe and arranges to get alterations done so that it will fit her properly and isn’t too long. While Trent is gone that girls help Amber get ready and do her hair and make-up.

As soon as Trent and Amber are out the door, the kid get in to a massive pillow fight in the livingroom. Meanwhile, Trent surprises Amber and takes to a honeymooner’s suite that he has rented at a bed and breakfast. He gives Amber her silk robe and reassures her that he stayed within budget. Amber tries on her robe while Trent lights candles in the bathroom and draws her a bubble bath.

In the morning Trent and Amber head back home, and they have to prepare the food that they are taking over to his sister Heidi’s house for Thanksgiving. This is the first time that Amber hasn’t hosted Thanksgiving, but unfortunately they can’t have it at their house this year because it is still under construction. They pack up the food and head over to Heidi’s house to meet up with their other relatives for dinner. They all gather around the table, and say what they are thankful for this year. After dinner everyone goes to the backyard to play football.

After the Thanksgiving festivities, Trent and Amber head home to work on the girls’ bathroom and put the finishing touches on it. Amber is ecstatic to have a second bathroom in the house, they put on a bow on the door to surprise the girls and then they have the big reveal. The girls are thrilled to finally have their own space to get ready for school every morning.