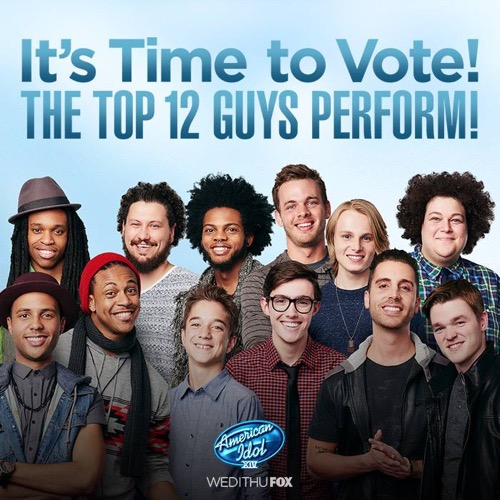 It’s another exciting night of American Idol 2015 on FOX with an all new Wednesday February 25, season 14 Episode 15 called “Top 12 Boys Perform,” and we have your weekly recap below. On tonight’s episode, the Top 12 male vocalists perform.

On tonight’s episode as per the FOX synopsis, “the time has finally come for America to be heard! The Top 12 guys take to the stage for the very first time in hopes of winning over viewers, who will then vote for the first time this season!.”

Adam Ezegelian is up first with a rendition of Twisted Sister’s “I Wanna Rock.” Jennifer Lopez gushes that Adam’s performance was “crazy and contagious.” Keith Urban jokes that he loves when Adam sings “heart-aching ballads.” Harry Connick Jr. agrees that Adam “embodied what rock—n-roll is all about.”

Up next is Nashville’s Michael Simeon, he won over the judges during his audition when he asked Jennifer Lopez to slow dance with him. Tonight Michael performs “How Am I Supposed To Live Without You” by Michael Bolton. Harry says that he thought Michael’s performance was good and he did a good job, but he warns him to try and stay in tune with the music. Jennifer agrees that she really enjoyed Michael’s performance, Keith says that he thinks they are going to be hearing a lot more from Michael.

This is Savion Wright’s second attempt at American Idol, last season he never made it past Hollywood Week. Tonight Savion is playing Train’s “Soul Sister.” Savior gets the audience rocking, afterward the judges praise Savion’s style. Jennifer warns him not to get too caught up with the audience, he needs to start looking in to the camera and “touching hearts at home” so that he can get votes. Keith Urban wasn’t a fan of Savion’s song choice, he doesn’t think that it displayed all of his talents.

Mark Andrew takes the American Idol stage next performing “The Weight” by The Band. Harry Connick Jr. praises Mark and says that he “is in the zone” much more than any of the remaining contestants. Jennifer Lopez agrees that his style is unique – and it is going to carry him a long way in the competition.

Fan favorite Trevor Douglas performs a rendition of “Best I Ever Had” by Gavin McGraw for the American Idol judges next. Keith says that Trevor’s “visual performance and energy is palpable.” Jennifer Lopez disagrees and thinks that Trevor’s performance didn’t showcase his vocal talents. But, the judges agree that Trevor is “very lovable” and will probably get a lot of America’s votes.

Clark Beckham takes the American Idol stage next and performs a soulful rendition of “When A Man Loves A Woman.” Afterwards Jennifer raves over Clark’s performance and says that he gave her “gooseys all day.” Harry agrees that Clark is “talented to withstand some really good critiques that will accompany the praise he receives.” Keith Urban keeps it light and shots “Nashville Representing! That was killer!”

Rayvon Owen performs Nick Jonas’s song “Jealous” next for the American Idol judges. Harry Connick praises Rayvon and says that his performance was “likable and a great song choice.” Jennifer reminds Rayvon that he needs to work the cameras and not just the live audience, because it is the viewers at home that are going to be voting for him. Jennifer tells Rayvon that his song could have used a “little more attitude especially during that song.” Keith Urban praises Rayvon’s voice and his falsetto, but agrees with Jennifer that he could have used a “little more edge.”

American Idol’s youngest competitor, 15 year old Daniel Seavey, he sings Jason Mraz’s hit song “I’m Yours.” Keith raves that he loves the way Daniel looked, and it was “interesting hearing his voice tackles that song and the really high notes.” Jennifer reminds Daniel that he is “beyond adorable” but he needs to make sure the song matches that. Harry laughs that he feels sorry for America tonight because there is some serious talent performing on the American Idol stage tonight.

Riley Bria is up next, he performs “Homeboy” by Eric Church. Jennifer gushes that Riley is the “perfect combination of sweet and edge.” Harry says that he can’t help but notice that Riley reminds him so much of Keith, he is going to start calling him “Keith Suburban.” Keith praises Riley for choosing to do an Eric Church song and gushes that “it was really cool.”

New Orleans native Quentin Alexander takes the American Idol stage next and performs a rendition of “I Put A Spell On You.” Harry Connick Jr. says that he “really hopes America gives Quentin a chance to stay on board because there is a real artist in there.” Jennifer gushes that Quentin’s performance was on of his best yet. Keith Urban laughs that Quentin “hasn’t even made a record yet and that was a Grammy performance.”

29 year old Nick Fradiani is up next, he performs an Ed Sheeran ballad for the American Idol judges and woos the audience. Keith Urban praises Nick’s songs choice and the fact that he played a guitar while he sang. Jennifer Lopez agrees that Nick’s performance was one of the best of the night and whines that she doesn’t want any of the Top 12 guys to be eliminated and sent home.

Tonight’s final performance is Qaasim Middleton with “Uptown Funk,” he gets everyone in the audience rocking, including the American Idol judges. Jennifer Lopez squeals that Qaasim “makes her want to get up there and dance and sing with him.” She raves about how much she loves him. Harry Connick Jr. agrees that Qaasim “gave it everything he got on stage,” and Keith Urban agrees that Qaasim “killed it!”