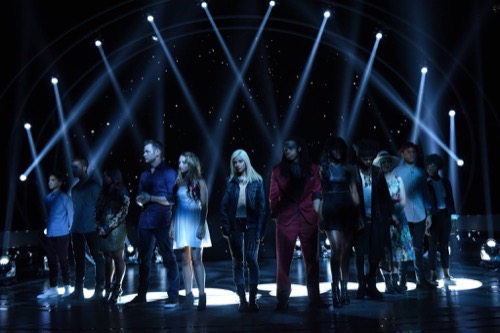 It’s another exciting night of American Idol on FOX with an all new Thursday March 19, season 14 Episode 21 called “Top 10 Perform” and we have your weekly recap below. On tonight’s episode, the top 10 will perform.

On the last episode, the top 12 finalists performed. They kicked off the evening with the contestants walking the red carpet, preparing for their live performances in Hollywood. Empire’s Taraji P Henson joined Ryan Seacrest on stage for a surprise appearance, and delivered the live vote results from America. One by one Ryan called up each singer that was safe tonight to sing. The last contestant to not have their name called was Sarina-Joi Crowe and she had to sing for her life. Did you watch the last episode? If you missed it, we have a full and detailed recap right here for you.

On tonight’s episode as per the FOX synopsis “and then there were 10! Two finalists’ journeys will end as America’s votes are revealed and the Top 10 perform! Tune in to the all-new “Top 10 Perform” episode.”

Tonight’s episode of American Idol kicks off with host Ryan Seacrest taking the stage, he introduces the judges: Jennifer Lopez, Keith Urban, and Harry Connick Jr. On tonight’s episode of American Idol, it’s “Soundtrack Central” and the remaining contestants will be performing iconic songs from some of our favorite class movies. Special guest star Jeff Gordon heads out on the stage and gives Ryan the official envelope with tonight’s results in it. There are eleven contestants remaining – and only 10 of them will be called up to sing tonight. The contestant that received the least number of votes will not be called up tonight and is officially eliminated.

The first singer to take the stage tonight is Adanna Duru with “I Love You, I Do” by Jennifer Hudson in the movie Dream Girls. After Adanna’s performance Keith Urban kicks off the critiques with, “It was hard to hear you in the beginning. But, first of all you sounded great. You look amazing.” Jennifer adds, “What I notice is that you are singing “I love you I do,” and I don’t want the fake excitement I want the real emotion. It needs to come from a real place.” Harry says, “I have been watching you over the last couple weeks and I notice that you look right down the barrel of the camera. Sing to the audience, you gotta preach to them and I think that will make the connection better at home.”

Up next is 15 year old Daniel Seavey, he has decided to sing Adam Levine’s hit “Lost Stars” from the movie Begin Again. Jennifer Lopez comments, “I think you did an okay job, it wasn’t your best one. But I actually felt a lot of emotion coming from you.” Harry agrees, “I think rehearsal is actually imperative, but not at the cost of spontaneity.” Keith was more impressed and noticed that Daniel added his own falsetto. Keith critiques, “ think what you need to do now is dig in a little more, especially with a song like that – I think you got it in you.”

The next member of the Idol Top 10 to sing for America’s votes is Rayvon Owen. Rayvon is singing “Staying Alive,” from the movie Saturday Night Fever. Harry Connick kicks off the judges’ comments and says, “I rally admired the arrangement, it was surprising to me. The biggest question that enters my mind, is how do you remain interesting is this competition. There’s not a tremendous amount of substance there, I think you can interpret a lyric with some depth.” Keith agrees, “From a performance stand point I felt a bit lost because you were loitering around there, you need to take command of the stage.” Jennifer agrees, “When you were playing the back I didn’t know how to feel. When you came forward, you got us. It’s about how you capture the audience every single time.”

Nick Fradiani is the next American Idol singer to take the stage, tonight he will be singing “Danger Zone,” by Kenny Loggins from the move Top Gun. Keith Urban tries to talk over the squealing crowd, “This is good, I think you are getting more comfortable up there. Keep going in that direction, keep loosening up.” Jennifer laughs, “You know you’re hot right? I feel like that song, the tone was perfect, I see you still in your head though. You just gotta own your hotness. Get out of thinking, just sing and have fun. Be that!” Harry agrees, “Honestly speaking, that song doesn’t give you any justice. Do a song that you can be sexy on. I love Kenny Loggins, but that was the wrong song.”

The next singer to take the stage is Joey Clark, she has decided to sing the song “Mad World” from the movie Donnie Darko. Jennifer kicks off the judge’s comments, “Joey! That was so beautiful, it was a different side of you. This was like paired down and serious artist – it felt really beautiful.” Harry agrees, “You always seem to stay in your lane, and you’re finding ways to widen your lane. It really allowed you to chew on the lyrics, there are so many great movie songs!” Keith Urban adds, “You are such an artist, you always delver something unusual. And I love the way you bring attention to the song and I hear it in a way I never heard it before.”

Tyanna Jones is called up on the American Idol stage next to sing “The Circle Of Life” by Elton John, from the movie Lion King. Harry kicks off the judges comments with, “You always have this ability to achieve the greatest results with seemingly the least amount of effort, until tonight. Tonight it looked like you were trying really really hard, there was some intonation issues and it sounded like t was yelled the whole way through.” Keith disagrees, “From my own personal tastes you may be the best singer we have, but tonight we had some serious pitch issues with the track.” Jennifer adds, “It was a very powerful song, I know you’ll do amazing next week. No worries!”

After America’s votes were tallied, the next singer to take the American Idol stage is Quentin Alexander. Quentin is singing “You’re The One That I Want” from the movie Grease. Kith Urban kicks off the judges critiques with, “I have heard that version before, that was an interesting performance. There is part of your talent that is still coming through. I actually think f you loosen up it will be there more.” Jennifer agrees, “It was very haunting and very beautiful, I don’t know if it translated as much as you felt it.” Harry agrees, “It was a very adventurous interpretation. You have to think about the pitch. That was hardly out of tune. You have to be thinking about what you are singing.”

The next American Idol contestant to take that stage and sing for America’s votes is Maddie Walker. Maddie is singing, “Let’s Hear It For The Boy” from the iconic movie Footloose. Jennifer comments, “I’m glad you sang that song because it was my mother’s favorite song when I was growing up. It was good, it was cute, your twang on t actually made me like it a little bit more.” Harry says, “I didn’t think it was good. I don’t know who you are. It felt very pageanty to me, are you a country singer or a pop singer. It wasn’t good to me.” Keith adds, “I think it is all about song choice. If you chose a ballad tonight I think you would have really really hit.” After Maddie’s performance, Ryan Seacrest announces he has a special surprise for soundtrack night – legendary singer Kenny Loggins takes the stage and performs the theme song from the movie Footloose. Harry Connick Jr. is ecstatic that Kenny Loggins stopped by for a surprise performance.

Clark Beckham is the next American Idol singer to perform tonight, he takes the stage and sings “Sunday Morning” by Maroon 5 from the movie Cheaper By The Dozen. Harry comments, “A lot of times I use the words and viewers don’t know what I mean. You know what arrangement means right? Basically you just put your arrangement on that song and knocked it out of the park.” Keith agrees, “And you are such a good singer! Just put a little bit of smile in there too man, that’s it.” Jennifer comments, “That song was so you, we have heard that song a million times, and you put a whole new spin on it.”

There is only one spot remaining in the Top 10 – according to America’s votes that spot belongs to Jax. So, Qaasim Middleton received the least amount of votes this weeks. Jax heads up on the American Idol stage and performs “I Wanna Grow Old With You” from the hilarious movie The Wedding Singer. Keith kicks off the critiques with, “I love that you did that song, I have only ever had Adam sandler sing it. It was beautiful.” Jennifer agrees, “I think it played in to the quirkiness in your voice. Over all tonight there was some interesting choices.” Harry adds, “I think it paid off tonight, it was everything that it should have been – lovely and sweet and personal. But, when the guitar stops – make sure you are in time.”

Qaasim Middleton has a chance to sing for the judge’s one last time to see if they will use their one save of the season on him. Qaasim takes the stage and performs “Come Together” by The Beatles. When Qaasim finishes his performance, it is time for the judges to deliberate. While Jennifer, Harry, and Keith discuss their decision – the crowd chants for them to save him. Harry says that it was arguably the best performance of the night – and the judges have decided to save him. So, no one is eliminated tonight and next week will be double elimination.