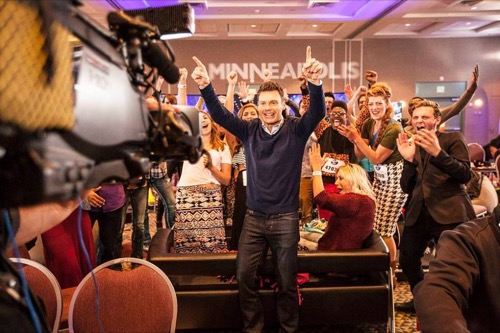 It’s another exciting night of American Idol on FOX with an all new Wednesday January 21, season 14 Episode 5 called “Auditions #5” and we have your weekly recap below. On tonight’s episode, auditions are held in Kansas City, Mo.

On tonight’s episode as per the FOX synopsis “the search for a superstar continues onto it’s fifth part, find out who get’s a chance at becoming the next as American Idol head to the birthplace of Jazz and Harry’s hometown – New Orleans!.”

Tonight’s show is going to be an exciting one, which I’m not going to miss and neither should you. Tune in tonight at 8 PM EST! Celeb Dirty Laundry is your go to place for all the up-to-date American Idol News and we’ll be recapping it right here for you. Do you have a favorite to win? Hit up the comments and let us know who you really like!

Tonight’s episode of American Idol kicks off with judges Jennifer Lopez, Harry Connick Jr, and Keith Urban arriving at the next round of auditions in Minneapolis. After a quick touch-up from their hair and make-up crew, the singers come filing in. Up first is 17 year old Minnesota native Shannon Berthiaume – and she has never sang in front of an audience before. She wows the judges with a rendition of “house Of The Rising Sun.” Harry says that he “digs her,” and J-Lo says she is a “crazy artist in the most beautiful way.” Keith Urban agrees and votes “yes,” Shannon is getting a Golden Ticket and going to Hollywood.

The next American Idol hopeful to audition in front of Jennifer, Keith, and Harry is Kemil Casey – and he has brought along his own gold microphone to sing in to. He attempts to sing “Human Nature” by Michael Jackson. The judges are speechless, Harry laughs that it was “oddly entertaining.” Keith laughs and says that Kemil “is a really great guy, but the vocals aren’t there.”

California native, Airforce wife, and mother of three Vanessa Andrea sings for the American Idol judges next, even without a guitar strap she blows their minds. Jennifer gushes that Vanessa is “really great and she loves her style.” Vanessa calls her husband on her cell phone and lets the judges tell him that they are giving her a Golden Ticket and sending her to the next round in Hollywood.

The next singer to audition for the American Idol judges in Minneapolis is 20 year old Zach Johnson with a rendition of “Don’t Close Your Eyes.” Harry says that he “loves Zach’s energy and spirit and he likes his voice,” but he doesn’t understand why he sings with a country accent when he doesn’t speak with an accent. Keith agrees that he likes Zach a lot, and thinks he has a good voice so he votes “yes.” It’s up to Jennifer Lopez – she tells him to try singing without an accent, so he breaks in to another song. He manages to persuade the judges to give him a Golden Ticket to Hollywood.

Minnesota native and 26 year old Cindy Jo moonlights as a Pre-K teacher and outdoorswoman, sings a rendition of Patsy Cline’s “Crazy” for the American Idol judges. Jennifer says that she felt like “Cindy kept losing the melody of the song and was trying too hard to show off her voice.” Harry says that he really digs Cindy’s voice – but he felt like she was yelling at them. Jennifer votes “no,” and Keith Urban votes “yes.” So, it is up to Harry Connick Jr. He shocks everyone and votes “yes” and gives her a Golden Ticket to Hollywood.

The next American Idol hopeful is a YouTube star and Vegas performer named Jacob Tolliver. He entertains Jennifer, Keith, and Harry with a rendition of “Great Balls of Fire” on the piano. Harry is concerned because there is not any music like Jerry Lee Lewis on the piano. Keith is concerned because he wants to know if Jacob can actually sing or just copy other singers. Jacob sits back down at the piano and sings “Stay With Me.” Harry is pleased with his second song. Jennifer, Harry, and Keith all vote “yes” and give Jacob his Golden Ticket to Hollywood.

Hannah Mrozak, a 16 year old from Wisconsin, auditions next with Etta James’s “Gotta Hold On Me.” The judges are blown away, Jennifer can’t believe that she is on 16 years old and she can’t wait to see where she goes. The judges are unanimous and they all vote “yes” and give her a Golden Ticket to Hollywood. 21 year old Kristi Kroker sings “Kingdom Come” for the American Idol Judges, Jennifer says that her song choice was “risky” and it felt like a high-school audition and not an American Idol judge. The judges break the news to her that she is not going to Hollywood.

Mark Andrew is a landscaper, and son of a newborn baby boy. He has decided it is now or never, since this is the last year that he is eligible to audition for American Idol because of the age cut-off. He breaks out in a rendition of “Soul Shine” for Harry, Jennifer, and Keith. Keith interrupts him and asks him to try a different song, so he decides to sing “ I Wanna Be” from the Disney movie Jungle Book. Jennifer gushes that the tone of his voice is so pleasant and cuts through. Harry says that he “wants to hear Mark on record.” The judges are unanimous, they all vote “yes,” and give him his Golden Ticket to Hollywood.