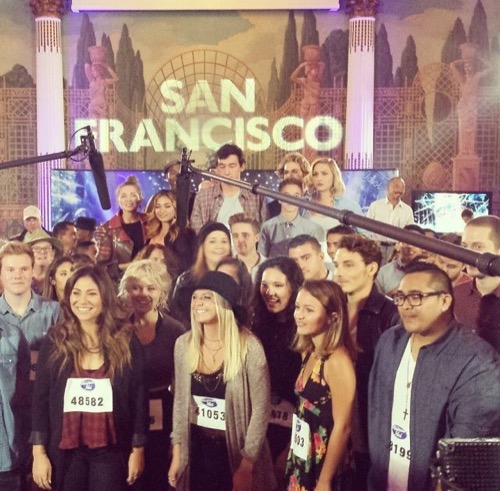 It’s another exciting night of American Idol on FOX with an all new Thursday January 29, season 14 Episode 8 called “Auditions #8” and we have your weekly recap below. On tonight’s episode, auditions continue in San Francisco and tonight is the final night of auditions.

On tonight’s episode as per the FOX synopsis “the search for a superstar continues onto it’s eighth part, find out who get’s a chance at becoming the next American Idol.”

The cast and crew are in San Francisco on tonight’s all new episode of “American Idol”. But before the judges could continue searching for untapped talent in the Bay Area, the judges did what they’ve grown accustom do – they started showing off their own abilities.

It seems that without J.Lo around, the other judges can become easily bored. So Keith asked Harry to try out his skills on the piano. And then two of them had fun throwing a little concert for the production before, you know, they eventually were forced to get back to business.

With the return of their third judge, it was now time for the young hopefuls to come and auditioned. However no one expected they would love Adanna Duru so much. The 17 year old came in front of them and presented herself with a warm/ approachable attitude. So right away the judges liked her for that. Yet they came to love her after she was able to hit all the high notes in Lady Gaga’s “You&I”.

Thus, “American Idol” was onto a good start in San Fran. But, sadly, the next notable performance couldn’t keep up the momentum.

Christopher was talented, though unfortunately his talents only extended to his abilities with the guitar. As for his voice, it was hard rock (mostly screaming) and that’s not what the producers of this show were looking for. So in the end he didn’t get the golden ticket. Hunter Larsen on the other hand did.

Hunter was a bit of free spirit. She was one of those jumpy all around kind of girls. And then when it came time for her to sing a Frank Sinatra song – she more than did it justice. So that was the difference between her and the people that only thought they could see.

Plenty of times, people have auditioned for this show without even an ounce of talent. And sometimes they don’t take rejection well or they have these incredible backstories that somehow is supposed to make up for everything else. But that still doesn’t change the end result.

So just come into this competition with your eyes wide open. Baby faced Daniel was just a buddle of talent, but he also knew his voice has recently broken. Hence he then rearranged songs in order to work with him and not against him.

Daniel was barely fifteen and yet he caught on to what he had to keep performing. So, why did others purposely choose the “song of the moment” when they knew it didn’t fit their voice? Apparently everyone believes they can pull off Sia’s “Chandelier”. And it became such a laughing stock that Harry had to perform the song.

He messed with his high notes on performance but still managed to give off a better performance that some of the people that came in front of them.

And afterwards, the judges did get to meet some rare talent. They met Rocky who grew up in absolute poverty in Nigeria but who also composed his own music with such soul that it nearly moved Jennifer Lopez to tears. So of course Rocky got his golden ticket. And then there was Jaq who again performed her own song – though with her, the judges were tad reluctant about letting her through.

Jaq was young and the judges were worried she wouldn’t be able to handle the rest of the competition. But they let her through and then did the same with Tyanna who was only a year older.

Now Tyanna was from Florida but her family could only up with the money at the last minute so San Francisco was literally her last opportunity. And thankfully she didn’t end up blowing it.

Tyanna was the last performance and golden ticket of the auditions and she left the judges with a good impression. So much so they were willing to overlook her slight problems with her pitch.

So, hopefully, she and others like herself won’t be the first to be eliminated during the Hollywood auditions!