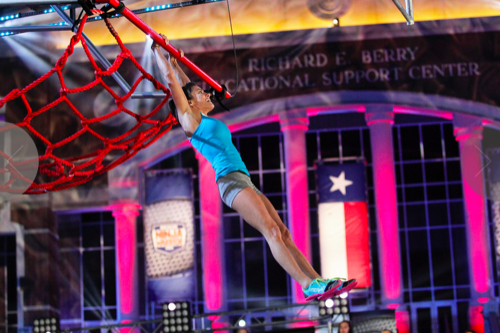 American Ninja Warrior, NBC’s obstacle course competition airs tonight with an all new Monday, June 15 season 7 episode 4 called “Orlando Qualifying.” We’ve got your recap down below! On tonight’s episode a qualifying round takes place in Orlando.
For those of you who don’t know, the action-packed series follows competitors as they tackle a series of challenging obstacle courses in both qualifying and finals rounds across the country.

On the last episode American Ninja Warrior” travels to Houston, Texas where competitors tackle six obstacles including the brand new Tilting Slider, Cargo Crossing and The Swinging Spikes. “American Ninja Warrior” veterans Brent Steffensen and Sam Sann return along with season six breakout star and fan-favorite Kacy Catanzaro. Competitors in this rigorous obstacle course competition series vie for a chance to win a cash prize of $1,000,000 and the title “American Ninja Warrior.” Did you watch last week’s episode? If you missed it we have a full and detailed recap, right here for you.

On tonight’s episode per say the NBC synopsis, “Orlando, Florida is the next stop for competitors to give it their all on the “American Ninja Warrior” obstacle course, this time from the grounds of the Universal Orlando Resort. There they will face several new obstacles, including the Paddle Boards and Tire Swing. Veteran competitors, including pro-wakeboarder Sean Murray, William “Spartan” Brown and rivals Flip Rodriguez & Drew Dreschel, return. Competitors will vie for a chance to win a cash prize of $1,000,000 and the title “American Ninja Warrior.”