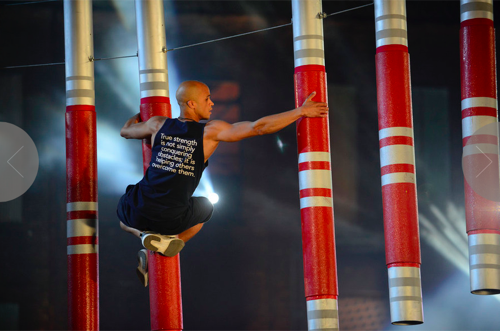 On the last episode “American Ninja Warrior” traveled back to Orlando, Florida’s Universal Orlando Resort where the top 30 competitors from the Orlando Qualifier tackled the Orlando Finals course. In addition to the obstacles from the Orlando Qualifier, contestants faced the Salmon Ladder, Cannonball Alley, Helix Hang and Invisible Ladder. Top competitors Flip Rodriguez, Drew Dreschel and Shaun Murray took on the course. The Orlando competitors vied for a chance to compete in the Las Vegas finals, to win a cash prize of $1,000,000 and the title of “American Ninja Warrior.” Did you watch last week’s episode? If you missed it we have a full and detailed recap, right here for you.

#AmericanNinjaWarrior is in Pennsylvania tonight for the city finals. Kristina takes us through the course. We start with the slanted steps, log grip, snake crossing, wind chime, devil steps and warped wall then the salmon ladder, floating monkey bars, doorknob arch, and the invisible ladder to finish it. First up is Danny Johnson, a fourth season veteran. He’s the tallest tonight at 6’4” but weighs just 165.

He makes it past the first two obstacles with ease then moves to the snake crossing and jumps over most of the second half then moves to the wind chimes. His height helps there. He poked himself in the eye when he got onto the chimes. Now he’s on the devil steps which has plagued him in the past. He tried to get aggressive on the dismount and drops a foot in the water so he’s out of it for this year.

Next is Russian exterminator Pavel Fesyuk who’s in his second year. He conquers the steps, the log and then moves to the snake crossing. He makes the jump from the halfway and lands awkwardly then moves to the wind chimes. He nails those two but is moving really slow. He looks tired as he moves to the devil steps. Now to the warped wall which he grabs easily. He’s on the salmon ladder.

He grabs onto the floating monkey bars but goes down on the second bar. Not too bad though. He might move on. Over the break, brothers Dustin Sanderson did the qualifier really fast but got bit by the snake crossing and fell hard. Then his brother Chad Sanderson made it up the wall but pooped out on the salmon ladder. Next is walk-on PJ Granger who waited in line 10 days for the qualifier.

The rookie hops the steps, then grabs the log and moves to the snake crossing. He makes that, conquers the wind chimes and the devil steps then the warped wall. The salmon ladder was no trouble but the floating monkey bars proved too tough. He lost his momentum and fell but hopes he will still be able to make it to Vegas.

Ivy Leaguer Sean Darling-Hammond is next. He conquers the first two obstacles then moves to the snake crossing. He moves on to the wind chimes then the devil steps. Sean makes it farther on the monkey bars than anyone else and he moves for an early dismount and lands it! The rookie is the first to defeat the obstacle and move on to the doorknob arch. He moves fast on it rocking his hips.

He’s losing strength and is forced to try for an early dismount and misses it but had a very impressive run. Likely he’s a lock for Vegas. On the break, Joe Archambault fell hard on the snake crossing as did Kelly Mohler. Then Todd Mitchell fell prey to the floating monkey bars. Now it’s #BrooklynBeast stuntman Luciano Acuna Jr. He’s a Vegas veteran from 2014. He fell on the steps! OMG!

Luciano was just too aggressive and fell flat on his face. What a humiliating upset and an early exit. More like #BrooklynLeast. Now it’s gymnastics coach Miles Avery – the oldest competitor at 56. He clears the steps and the log then moves to the snake crossing. He moves too slow and falls off the snake crossing. He was being over-cautious and just fell too soon. What a bummer.

Jamie Rahn, #CaptainNBC, is next. He starts and hops the steps then conquers the log and hops past a chunk of the snake crossing. He takes on the wind chimes then the devil steps. He takes the warped wall and moves on the salmon ladder. He kills that and the floating monkey bars. He’s on the doorknob arch now. He’s at the end and nails the dismount! He made it. Now Jamie has the invisible ladder.

He’s on the ladder but is struggling. He’s fighting hard and is wiggling around trying to make it up there. He’s so close and is struggling. He tries to get a foot up and fails and he hangs there and then falls. The good news is, Jamie Rahn will definitely get a ticket to Vegas.

Geoff Britten is next and everyone thinks he can win it all. He’s a veteran who has trained with some of the other top Ninjas. He hops the steps with ease, moves to the log and knocks that out then takes the snake crossing with caution. He clears that and moves to the wind chimes. After a solid dismount it’s the devil’s ladder. He’s got a good pace going and then moves on to the warped wall.

Next is the salmon ladder. He moves along and then takes the monkey bars. He does well there and lands it making it look easy. Now it’s the doorknob arch. He skips over knobs hands over hand moving so fast. It’s insane. He lands it and then pauses to take a short rest. He said it would be a cake walk and it looks like it. It’s just the invisible ladder now. He zips up it and slaps the buzzer.

Geoff Britten is the first to finish the Pittsburgh city finals. Next up is firefighter Mike Bernardo – he’s a sixth season vet. He hops the steps, grabs the log, then heads for the snake crossing. He makes a long leap and clears it. Next is the wind chimes. He moves along rapidly and then lands and heads for the devil’s steps. He clears that and moves to the warped wall and runs that easily.

He takes the salmon ladder with ease and then conquers the monkey bars and now faces the doorknob arch. He falls almost right away, but that should be far enough to get him to Vegas since he did the course fast. On the break, Ron Schmidt was taken out by the monkey bars as did veteran Brian Wilczewski. Next up is crash test engineer Adam Nihm. He’s ready to crash the course.

He starts out and leaps the steps then moves to the log and makes a rolling landing off the snake crossing. He takes on the wind chimes and moves along methodically. He lands on the platform and is ready for the devil’s steps. Next is the warped wall and he’s up it with ease. He bounces onto the salmon ladder and then moves to the monkey bars that have taken down so many tonight. He makes it halfway before he makes a grand splashdown. But it should be good enough for a Vegas slot.

Back from the break, cystic fibrosis warrior Ryan Ripley fell on the salmon ladder and Jazon Khazi bought it on monkey bars. Then Mike Meyers was killed by the doorknob arch. Next pup is Michelle Warnky, one of only four women ever to make it up the warped wall and the only woman in Pittsburgh competing tonight. She hops the steps and moves on to the log. She does it like a boss.

Next is the snake crossing and she seems to be overthinking it. She tries to leap for it and hits head first into the platform. She’s out early – what a disappointment. Back from the break, we see that Scott Maxson lost it on the devil’s steps and Adam Grossman lost it on the monkey bars. Next up is Joe Moravsky #TheWeatherman who has been to stage 3 in Vegas the last few years.

He has never failed on a city qualifier. He hops the steps with ease, moves to the log and takes the snake crossing with aplomb. Next is the wind chimes. Now it’s the devil’s steps. He moves through them fast and confidently. Now it’s the warped wall. He’s up and over it and moves to the salmon ladder. He’s on the floating monkey bars and makes a misstep but recovers then makes an early dismount.

Now it’s the doorknob arch. He skips over some knobs and moves fast with locked arms. He lands the dismount and heads for the invisible ladder. He shakes it off first and then grabs the rings. He struggles a bit towards the top. He runs out of steam towards the top but lands his foot inside and almost falls backwards in but pulls up and slaps the buzzer.

The last run of the night is Elet Hall – he likes to go fast, but we’ll see if he can with the rigors of this course. He had the fastest time in the qualifier, so we’ll see. He hops the steps, rides the log, moves to the snake crossing and leaps it with ease. He hops onto the wind chimes and moves along those fast. He moves to the devil’s steps and is a full minute ahead of Britton’s pace. He zips along those as well.

He runs up the wall and heads right for the salmon ladder. He racks right up the ladder then onto the monkey bars. He misses once but stays calm and does an insane dismount three bars short. He’s three minutes ahead of Britton. He moves to the doorknob arch but misses when he tries to skip too many. He looks tired and is thinking about a dismount. He falls! OMG! Everyone is shocked. He’s so consistent and everyone is stunned, but he will definitely be in Vegas. He says his hands got too cold.