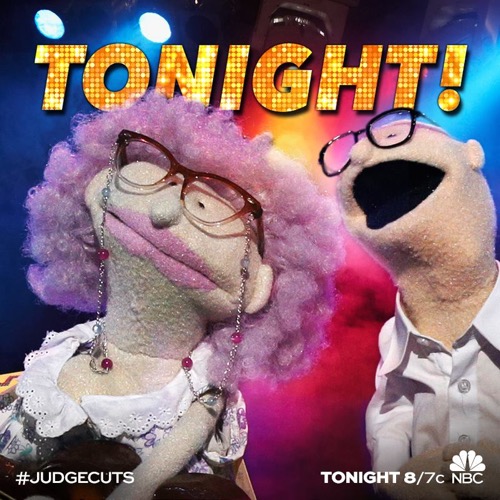 Tonight on NBC America’s Got Talent returns with an all new Tuesday July 21, Season 10 episode 9 called “Judge Cuts 2”. We’ve got your recap down below! On tonight’s episode the judges make their final decisions to determine which acts will advance.

On the last episode, Howard Stern invited stage and screen star Neil Patrick Harris to join the judging panel for Judge Cuts and gave him control of the Golden Buzzer. Did you watch the episode? If you missed it, we have a full and detailed recap right here for you.

On tonight’s episode per the NBC synopsis “in the second week of Judge Cuts, Heidi Klum invites Grammy Award winner Michael Bublé to join the judging panel and gives him control of the Golden Buzzer.”

#AGT has teams competing for #JudgeCuts again tonight. 20 acts will compete and only seven will make it through. Tonight’s guest judge is Heidi’s choice and we see that it’s #MichaelBuble. Michael gets a huge welcome from the crowd. He says he’s lucky to be there and Heidi says she brought the most handsome guest judge. Howard says he used to the be the handsomest and tells Michael not to get in his way. Also, Michael has a golden buzzer of his own to put someone straight to the live shows.

Aiden Sinclair is a magician who spent some time behind bars and learned magic while in prison. He starts at the edge of the stage and rubberbands a deck of cards then throws it to Howard. Each judge will look at and remember a card. They each look at one card and pass it down. Howie misses on the toss back. He asks them to hold up their hands and says if he names their card to drop their hand. He gets all five! They are stunned.

The crowd and judges are on their feet at that one and chant for the judges to put him through. Howie asks if he escaped from prison. Howard says he’s solid and an exciting act. He heads backstage with positive reviews (Were there just five cards in the deck and they were repeated? No one checked to be sure it was a normal deck of cards)

Next is shy singer Jenna Renae doing Fools Rush In – wow. Michael Buble says he loves Elvis and has never heard the song done like that. Howard says she needs to own the stage a little more but the singing was great. 87 year old Shirley Claire is back. Howard jokes about Nick dating Shirley as he walks her out. She sings and shimmies like an old-school showgirl. Michael Buble says she’s proof you’re only as old as the man you feel and she gets love from judges and audience.

Daniella Mass from Columbia is next. She sings Don’t Cry for Me Argentina from Evita. Her voice is lilting, strong and lovely. Her last note is incredible. All but Howie and Mel B are on their feet. Michael Buble compliments her in Spanish and Howard calls him a show-off then compliments Daniella’s voice. Mel B says she had them in the palm of her hand.

Puppeteer Ira is next and he again professes his love for Mel B then breaks into Let’s Get It On. She laughs really hard at the puppet singing to her about getting it on with her. His voice is amazing. There’s a mom puppet there who says she told him “let’s get it on” meant to go get an ice cream. Mel B says she wants to get it on with him.

She even gives him a wink. Heidi says she’s upset that he doesn’t sing for her. He says she can get it on with he and Mel too. Michael Buble says he’s likeable and then tells the crowd to shut up as they make news. Howie says there are only seven spots so they’ll see what happens. Howie jokes that Mel is married and she says anything goes with Ira and his puppet.

Howie leaves a cat face tank top in Mel B’s trailer as her birthday gift. Later Howie puts on the cat gift – it’s a full like tank wrestling suit that’s skin tight and has a grey cat on it. The audience also wishes her happy birthday.

Next is tiny blind dancer Benjamin Yonnaton that uses Google Glass to help him. Howie says he’s very memorable. He’s amazing again and really uses the breadth of the stage despite his disability. Howie says it’s both uplifting and heartbreaking to watch him dance. They are so amazed that he’s only 14 and performing like this. Howard congratulates him. Heidi tells Michael she’s proud of him and Howard says he was 50/50 on Michael but he’s done well.

We next see dancer Facinet Sylla who does a crazy tumbling street dance. Howie raved about it but says he doesn’t think it’s for the Radio City Music Hall. Then we see Nastasya Generalova who does a gymnastics type routine that’s pretty cool. Heidi says it was flawless. Howard worries he’ll have to eliminate people he thinks should go through. Wes Barker comes out and he’s going to try and get out of a straitjacket. If he doesn’t beat the clock, we’ll see a naked photo of him on the big screen.

Heidi says she kind of wanted to see. Michael says that was fun to watch. Next up is Uzeyer Novruzov, the guy who does the Charlie Chaplin-inspired routine. Last time he did an amazing balancing act with a ladder. He has a ladder again – I wonder if that will detract from his reviews. He’s way up high on a metal ladder. It is bigger than last time. The audience seems to like it and chants to put him through.

Howie says he could watch that for hours and he’s what they celebrate on AGT. Heidi says she loves him. Michael says it’s exceptional and he offers to let Michael try it. Howie tells him to. The crowd chants and he goes to the stage. Mel B pulls out her phone to film it. Hi flips it around to make it easier for him and Michael dances around until Howard buzzes him with the bix red X. Michael says he took the first step and thought I’ll just shake my ass instead. The guy says he feel 10 years ago and was in a coma for three years. Howard says well done. Heidi gives him props too. Michael says it’s slippery and deadly.

Next is singer Ryan Shaw who kills it. Mel B says well done and asks about his bandaged fingers. He says it was a table saw accident. She says at least it’s his left. Michael says it was beautiful and the strongest voice he’s heard tonight and says he got them roaring. Howard says they have great singers tonight. Next up is two besties from Atlanta who have been singing together for a decade – The CraigLewis Band. They get mad props from the crowd.

Michael says he’s thinking about pushing the button for them but doesn’t think they need him to do it. The crowd cheers and Michael goes to slap it then stops and pulls back. Mel B says it’s mean and so does Heidi. He finally slaps it and they are bathed in gold confetti and that means they go straight to the live shows at Radio City Music Hall. Nick comes out and gives them the good news and Michael says they deserve it. One of the guys is crying.

Next up is the killer stunt act Doctor Dangers All Stars – with a motorcycle stunt. Their little person will jump a motorcycle through a ring of fire then drive through a wall of fire. Heidi and Howard tell them about their insane first bush crash stunt. The guy takes off on his mini bike and the others set their cowboy hats on fire. It’s a pretty lame stunt and Howie and Howard hit their x’s. Looks like it was a joke. He busts through eight walls of fire, spins out and crashes.

It wasn’t as impressive as their first stunt. Howard says they got two x’s and says he hit the x because it was underwhelming. Howie agrees and says last time was explosions and they followed up with a tiny ramp and a little guy on a bike. Michael says it was dangerous and he wouldn’t do it. Next up are more dance troupes. Center Stage does their routine then Dadditude who is engaging as always. Then it’s DMNation.

They do another cool routine. Heidi loves it and she, Michael and Howie are on their feet with the crowd. Michael says it was magnificent and he’s proud they’re from Canade like him. He says it was tight. Howie says it was strong.

Next is dance group ChippenDoubles who has an Obama impersonator along with Michelle Obama. Howard hits them with a red X. Then there’s an Oprah throwing money, a Kim and Kanye, a Katy Perry and a Gaga. Howie hits them with an X as well. The crowd is booing as the Mariah comes out. Nick starts laughing hard. They get four x’s and are shut down. Heidi says they are officially eliminated then the judges wonder if they did Mariah for Nick.

Hypnotist Chris Jones is next and calls up Mel B and Michael. He couldn’t hypnotize either of them and he gets x after x and is eliminated. Michael says maybe he’s too skeptical. Chris tells Howie he can help him with the germ thing. Cross dressing comedian Scott Heierman comes out and Howard asks if he’s shaved off his beard and he says it grows back in 30 minutes so he decided to go with it. He does a family joke then forgets his lines. He’s totally lost and is blowing it. He starts to cry.

He breaks into tears and you can tell the judges feel bad for him. Howard says it’s a lot of pressure and he gets it. He says he blanked and tells the audience he was so natural that it was like a one man/one woman show. Howard says he admires his courage and asks Michael if he’s forgotten lyrics. Michael says it has happened to all of them up there and they still made it. Mel B says to come back next time and to be better.

Howard goes backstage and tells Scott that the good first audition went so well that it freaked him out. He tells Scott to keep at it and gives him a big hug. Next is the Detroit Selected of God Choir. They break into Beyonce’s Survivor. It was unexpected. Howard says well done and it was exciting and different. Michael says he needs to find an excuse to work with them and says it was pitch perfect and powerful.

Now the #JudgeCuts decisions. They decide to go with: