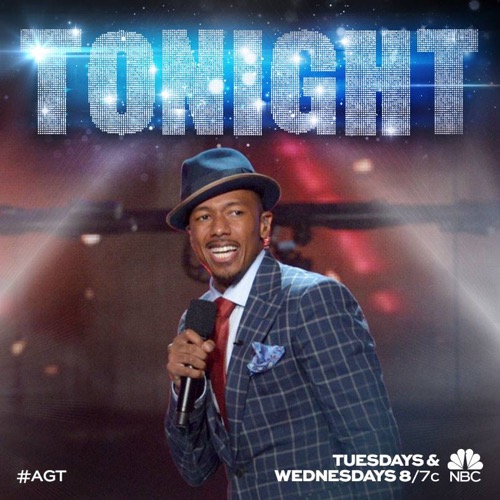 Tonight on NBC America’s Got Talent returns with an all new Wednesday August 18, Season 10 episode 14 called “Live Results 2”. We’ve got your recap down below! On tonight’s episode twelve of the Top 36 acts perform at Radio City Music Hall in New York City.

On the last episode, the votes were in and seven acts from the previous night’s show moved on to the semi-final round of competition. Tonight, viewers had one last chance to send their favorite performer to the next round by using Google Instant Save. Did you watch the episode? If you missed it, we have a full and detailed recap right here for you.

On tonight’s episode per the NBC synopsis “Judging is turned over to the American viewing audience as 12 of the Top 36 acts perform live at Radio City Music Hall for the chance to win the $1 million prize. Starring celebrity judges Howie Mandel, Mel B, Heidi Klum and Howard Stern.”

#AGT10 live shows start now. DMNation is first- they have a huge number compete with explosions and fire. It’s very cool. The crowd is on their feet. Mel B says they upped their game again. Howie says they’re pizza because they delivered and the judges ate them up. Howard says he thinks it’s a similar routine to different music and says they need to change it up. Heidi says they ruled the stage. To vote for DMNation call 866-60-AGT01. Voting is open now.

Next up is magician Derek Hughes. He calls Mel B up to the stage to help. His sleight of hand is impressive. The crowd loves him. Howie says it was amazing and says he fired on all cylinders. Howard says he’s shown growth that’s remarkable. He says he keeps getting better and compares him to Doug Henning. Heidi says he’s complex and she likes it and says he could totally do a Vegas show. Mel B says he wowed her full on and she loves it. To vote for Derek Hughes call 866-60-AGT02.

The next act is Three Shades of Blue. They kill it and the lead singer did a backflip off the piano. Howard says it sounded good in the arena. Heidi says they rocked the hell out of it. Mel B says they need to relax and let go more. Howie says it’s a popular song and he thinks they will get a lot of votes based on the song choice. To vote for Three Shades of Blue call 866-60-AGT03.

Next up is hip hop dance group Animation Crew. They do a cool video game themed dance and Howard gives them an x. Howard says this was a lazy routine and a poor use of the Radio City Music Hall stage. He says he saw nothing new or original. Heidi says she agrees with Howard but didn’t want to push the x. She says the game overshadowed the dance and the dance wasn’t special enough. Mel B says she thinks the young kids will like it because she’s fresh. Howie says he liked it all but says they needed better dance to match the technology and thinks they’re going home. To vote for Animation Crew call 866-60-AGT04.

The next act is Arielle Baril. She does another gorgeous opera song and the crowd is on their feet. Heidi says she would hit a golden buzzer for her again. Mel B says she’s amazed she can sing like that with no formal training. Howie says she amazed him and says she has a long career ahead of her. Howard says she makes him feel great. To vote for Arielle Baril call 866-60-AGT05.

Ladder acrobat Uzeyer Novruzov is up next. He fell almost off the bat but kept going. He does two smaller ones then pulls out a giant ladder. The judges look stressed. He makes it to the top and it’s really cool. All four judges are on their feet along with the crowd. Howie says he was so worried and says it’s so high and he really pushed the limits. Howard says it was like he was at the Olympics watching him and calls him sensational. Heidi says she wanted to pass out. Mel B says it was too much and she says she was so scared she wanted to pee her pants and says well done for not falling to his death. To vote for Uzeyer call 866-60-AGT06.

Next up is Ira the puppeteer. He’s got a large boat and a number of puppets going. It looks like an act from the Muppet Show. He has a good voice but this is not a great act IMHO. Howard says it was fun and he liked that they dumped Mel B from the act. He says he made him love an old smelly sock. Heidi says it’s great to get to know him and his mom but says the personality was missing today from the act. She says she likes the banter. Mel B says she smiled the whole team. Howie says he loves him. To vote for Ira call 866-60-AGT07.

Water act Damone Rippy is next. He does a James Bond themed intro. He dives into the water and comes up on his water levitation thing. It’s pretty cool but looks a lot like the other time he performed. Heidi says she has seen a lot of people do it on vacation in Europe and she had never seen it before so it’s a little less special for her now. Mel B says it’s extreme water sports and says his being so good looking helps. She says he’s gorgeous and she liked it. Howie says it’s original and he should win something for even putting his head in the Hudson. Howard says it’s hardcore but he needs to develop ito a show biz act and he hasn’t done this. To vote for Damone Rippy call 866-60-AGT08.

Comedian Myq Kaplan is next. He wasn’t as good as he was last time. Mel B says not every joke hit and she wishes he had more time. Howie says they say leave them wanting more and he did. He says he’s funny and he laughed. Howard says maybe he was a little nervous but says he has good material and he thinks he should move on. Heidi says she likes him but didn’t love the jokes tonight that much. She says the good thing is that America gets to vote. To vote for Myq Kaplan call 866-60-AGT09.

Next up on AGT is singing duo Craig Lewis Band. They do Otis Redding’s Tenderness and they add an upbeat sort of funk to it. Howie and the crowd are on their feet. Heidi says it was awesome and says this song is one of her favorites and they made it their own. Mel B says wow their voices are spot on and says everything was perfect. Howard says they took an impossible song and did it well and causes it a home run. To vote for Craig Lewis Band call 866-60-AGT10.

Next is dance act Freckled Sky. They do a water themed act again but it’s cool. The crowd likes it. Howard sent them through before on a golden buzzer. Howard says they are very accomplished and says some acts rely too heavily on mixed media and says they dance great but says they brought it down a notch from last time. He says they need a new angle. Mel B says they are amazing dancers but it didn’t grab her attention right off the bat. Heidi says there’s a lot of passion and says she liked it. She says she wants a happy ending and Howard jokes that he does too. Howie says there are so many multi media dance groups this year, so it’s harder. To vote for Freckled Sky call 866-60-AGT11.

The last act of the night is Mel B’s golden buzzer act Sharon Irving. She sings John Legend’s Glory. The judges are all on their feet as is the crowd. It’s a huge standing ovation. Mel B says she’s so glad she hit her buzzer for her and says she’s just a natural and calls her a superstar already. Heidi says this was an inspirational performance all around and says her act stood out tonight. Howie says the golden buzzer was this and says she has a message and says she could change the world. Howard says what she did was brilliant and she’s the best singer in the contest and might be the million dollar act. To vote for Sharon Irving call 866-60-AGT12.

Join us for the live results show tomorrow night!