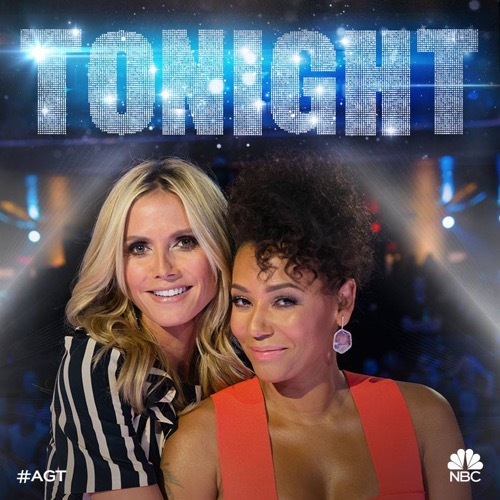 Tonight on NBC America’s Got Talent returns with an all new Wednesday September 1, Season 10 episode 18 called “Semi-Final 1”. We’ve got your recap down below! On tonight’s episode the semifinal round kicks off with 11 acts performing.

On the last episode, the votes were in to complete the Top 24 acts moving on to the Semi-Finals. Tonight, viewers had one last chance to send their favorite performer to the next round by using Google Instant Save. Did you miss last night’s episode?  If you did you can see a full and detailed recap, right here.

On tonight’s episode per the NBC synopsis “semi-finalists perform live at the world famous Radio City Music Hall for the chance to win the $1 million prize and be named the most talented act in America.”

It’s #AGT17 semi-finals tonight and the guys from #ImpracticalJokers are in the audience. Love those morons! First up tonight is puppet act Ira and his mom. It’s another big musical number. Meh. Howard says he’s burned out on them and says they keep doing the same big production number like last week. Mel B says he’s different but it wasn’t amazing but kind of entertaining. Howie says he thinks it’s great and a big family show. Heidi says she thinks he’ll have a tough time tonight.

Mountain Faith Band is next and they do The Weeknd’s I Can’t Feel My Face. There’s not much of a difference except the instrumentation. It’s pretty cool though. The crowd seems to dig it. Howie says he thought tonight was more Branson and not big enough for Radio City Music Hall. Howard agrees and says it was okay. He says they’re good musicians but the vocals lacked a big moment that gave the chills. Heidi says she saw their limitations tonight and says she dropped out on the high notes. Mel B says the song was the wrong choice but she loves them and what they bring.

Metal Mulisha Fitz Army is next and they have incorporated fire into their night act this time. One has his back lit on fire before he rides which is totally cool and fire shoots out his tail pipe too. The last stunt was particularly cool. Howard says they got their comeback tonight and says we live in the day and age of special effects so that hurts them and he’s glad they got to come back and says good job. Heidi says they are crazy good and wants to tell them to stop the danger. Mel B says what they do is death defying and a skill and well done for not dying. Howie says they are the wild card and the saying no risk, no reward applies to them and the reward is a vote to go through. He tells America to vote for them and says they deserve it.

Samantha Johnson is next and covers Earned It. Two of the judges are on their feet. Heidi says her performance built perfectly and says she’s a pro. Mel B says she was worried when she heard she was doing this since it doesn’t have a lot of range but she put her own spin on it to showcase her voice. She calls her an artist. Howie says she took this to a new level and stepped it up. He says it was the best performance tonight. Howard says she had multiple moments and says she’s the real deal and liked the arrangement. He says she did everything she had to do.

Next is magician Derek Hughes. He’s in his pajamas and says his kids are on the West Coast and he’s going to read his sons a bed time story. He shows a Humpty Dumpty book and tears the book into little pieces. Then it’s all back together and there’s a piece missing. Howie is on his feet and so is the crowd. It didn’t have a wow factor, but it was kind of cool. Mel B says she loved the trick but felt sleepy getting there. Howie says he has a great range and remembers that his first trick was a card out of his butt. He says he loved it. Howard says it was risky since it was slow but he showed range. He says everyone won’t like it but he loved it.

Comedian Drew Lynch is next. He does a great bit about talking on the phone and it’s hilarious. Howie is on his feet and says they all love him and says everyone loves him except Sprint (he joked that he sounds like he has bad cell reception). Heidi says she loves him and his laughing makes her laugh more. Howard says they all root for him and says he’s fabulous. He says he doesn’t like when he laughs at himself and says he doesn’t need that crutch. He says he should be more confident but Heidi says he’s having fun. Drew says he’ll try and be less funny so he doesn’t laugh at himself. Mel B says he has so many things going for him. She says she wishes he had more time and wants to hear more. Howie says she doesn’t hear more because he stutters. Drew says he can do an hour with 10 minutes of material.

The Craig Lewis Band is next and the do Change Gonna Come and it’s amazing as they always are. Howard is on his feet and says he felt like he was at church and says he thinks they made it into the finals and says to pick up the phone and vote for them. Heidi calls them the dynamic duo. She says the stripped it down to just their voices and rocked it. Mel B says there’s no doubt they’re incredible singers but says it lacked something and last week was better. She gets booed. She says they can do better. Howie says she has an eye infection then says it looked great, sounded great and it felt like he was in a church on Sunday morning and he’s sold. He says people need to vote.

Next is mentalist Oz Pearlman. He says the judges work too hard and calls Howard and Heidi on stage with him. He has beer, cola, OJ and wine. Oz has Heidi cover his eyes. He does this cool drink guessing game. He did 100%. The trick was too long to capture here but was amazing. Mel B says it’s freaky what he does so specifically and says he boggles her mind. Howie says he was amazed and says he bowls him over and can read their tongues and finds him amazing. Heidi says he’s the kind of act where people ask her how he does it and if she’s in on it. She says it’s incredible what he does and always different. Howard says Mel B’s drink is disgusting. Howard says he’s so entertaining and says vote for Oz.

Next up is rocker Benton Blount. He does Rachel Platten’s Fight Song. It’s great when artists cross genders for covers and he does it very well. Heidi says it was a perfect song for him and was an anthem. She says she hopes he makes it to the finals. Mel B says he sings from the heart but wasn’t sure it was the right song but Heidi argues with her over it. Howie says America has to decide and says America loves that song. He says he hopes Benton makes it through. Howard says he sings his heart out and looks like he used to be a Navy Seal. He says he’s likable but isn’t sure he did enough tonight.

Next up is special effects dance group Siro-A. All four judges are on their feet as is the crowd. Tonight was really cool. Mel B says she couldn’t tell what was human and what was projected and says she loved it and says they are serious contenders and others better watch out. Heidi says they have the most imagination and really entertain and can’t get enough of it. Howard says they are so good and says he heard from Donald Trump that he’s going to let them stay in the country. He says it’s not enough to dance, they have to amaze and they did. Howie says he would invest and build a room for them in Vegas.

Next up is Arielle Baril. She sings one of her opera songs. It’s amazing as always. Heidi is on her feet cheering. Heidi says she checks off all the boxes of a winning act and says she has an amazing voice, poise and loves that she pushed her golden buzzer for her. Mel B says she is pretty amazing for a 12 year old and says she needs to be careful with her timing and breath but says that will come with experience and technique. Howie says she really closed the show. Howard says he closes his eyes when she sings and can’t believe her voice comes out of someone so young and says she exemplifies what their show is about – finding talent that hasn’t gotten a shot.